Architects and archaeologists in Egypt are angered by the demolition of the Tombs of the Mamluks in Cairo to establish a road project. 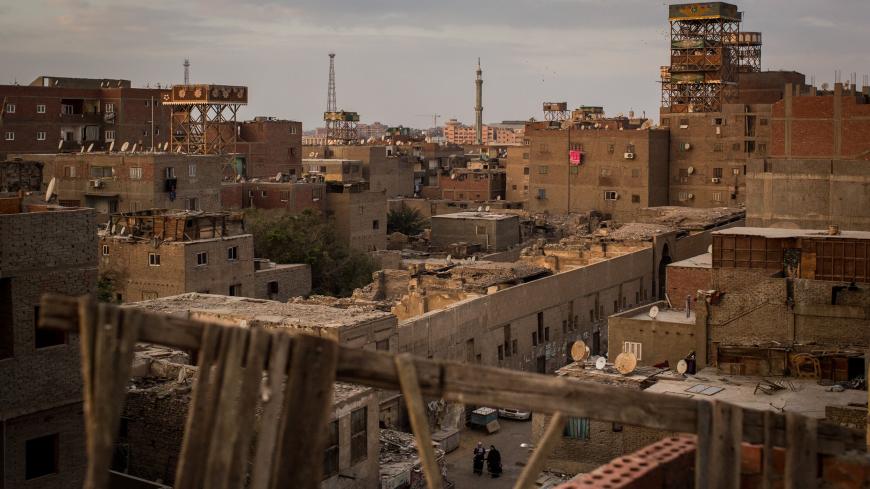 People walk along a street in the poor neighborhood of the City of the Dead, which houses more than half a million people living inside the graveyard, Cairo, Egypt, Dec. 14, 2016. - Chris McGrath/Getty Images

CAIRO — Archaeologists and visitors of Cairo’s Mamluk Qarafa area — known as the City of the Dead — along Salah Salem Street took to social media July 20, calling on the government to stop the demolition of tombs to make way for a bridge-building project.

A picture of the decision approved by the Ministry of Housing, which funded and executed the Paradise Axis project, began circulating on social media, before it was deleted. According to the decision, the road, as per the report, passes through al-Ghafir cemetery, Mansheya Nasir and Duwaika area in Cairo.

This project is part of a wider plan adopted by the Ministry of Housing's Central Construction Agency for the years 2020-21, and it includes 17 more road projects. The removal of parts of the Mamluk Qarafa area was first proposed in 2009 as part of the Cairo 2050 project put forth in 2007-08, but was repeatedly rejected by Al-Azhar and experts, who believe the removal of the graves constitute a profanation of the dead and of the architectural heritage of Egypt. The project was suspended, but the recent action has surprised many.

Nada Ezzeddine, a doctoral student in archaeological environmental changes and restoration of monuments at Osaka University in Japan, told Al-Monitor, “The Tombs of the Mamluks area includes a number of graves with a distinct historical and architectural value. This area is within the scope of Historic Cairo, registered at UNESCO.”

UNESCO included Islamic Historic Cairo on the World Heritage List in 1979. The Tombs of the Mamluks are also considered a protected cultural zone according to Egyptian Law No. 119 of 2008, and by virtue of the National Authority for Civil Coordination. The area is also subject to Law No. 144 of 2006, because it contains graves of a number of historical figures, in addition to having a distinctive architectural character that is part of Egypt’s heritage, and represents various historical eras.

“Building the bridge will distort the visual image of the area that has a great historical and heritage value,” Ezzeddine said.

Salah Adel, administrator of the Historic Cairo Facebook page, told Al-Monitor, “Cairo has about 537 Islamic monuments, 38 of which are in the Tombs of the Mamluks that were built in the era of the Circassian Mamluks in the eighth century A.H. [of the Muslim era, following the Prophet Muhammad's flight from Mecca to Medina in 622 A.D.].”

Although no monument was destroyed during the road project, the graves of a number of famous figures that influenced Egyptian history in the 20th century were demolished, including the graves of Ahmed Lutfi El-Sayed, Ihsan Abdel Quddous, Mohamed El-Tabii, Abbud Pasha, Zaki al-Mohandes and Nazli Hanim Halim.

Meanwhile, the government has denied the destruction of the tombs.

The Cairo governorate said in a July 22 statement that no tomb was destroyed or will be destroyed. It stressed that the outer structure of some tombs only were removed, but no historical monument was destroyed.

The head of the Islamic, Coptic and Judaic Antiquities Sector, Osama Talaat, said in a statement published by the Ministry of Tourism and Antiquities on Facebook July 20, “The Paradise Axis steers clear from the registered Islamic monuments in the Mamluk Qarafa area. The graves shown in pictures are unregistered buildings and they are modern individual graves.”

Ezzeddine commented on this saying, “The [government] statements are proof that all historical and heritage buildings are subject to demolition, despite the fact that they are over 100 years old, simply because they are not registered in archaeological records … rather than preserving them and registering them.”

She added, “Islamic Cairo has an integrated urban fabric that expresses the architectural identity of every era, constituting the city’s visual identity, which is at risk of being taken off the World Heritage List, unless we stop the demolitions.”

In an attempt to learn about how the Paradise Axis affects the Tombs of the Mamluks in terms of architectural character and urban fabric, Al-Monitor reached out to Secretary-General of the Supreme Council of Antiquities Mustafa Waziri, but he refused to comment on the issue. Meanwhile, Mahmoud Abdel Basset, director of the Historic Cairo Development Project, told Al-Monitor that he is not authorized to speak to the media about the Paradise Axis project.

Although the graves that were demolished belonged to people who have been dead for over 50 years, Waziri said in a July 20 interview with Al-Hayah TV network, “The demolished [graves] were barely 30 years old,” stressing that a technical committee had been formed to examine the evidence, murals and inscriptions in these structures, and look into the possibility of displaying them in museums.

In this context, professor of Islamic Antiquities at Cairo University Mokhtar el-Kasabany told Al-Monitor, “Only modern graves that belong to individuals have been demolished. Archaeological buildings and domes — such as the dome of Sultan Qansuh Abu Said — will not be touched.”

Kasabany added, “The Paradise Axis will help develop the area so it can become a tourist attraction in Cairo.”

However, archaeological researcher Moaz Lafi told Al-Monitor, “We must distinguish between heritage and archaeology, and the Tombs of the Mamluks is a heritage for its unique architectural models that reflect the development of the Egyptians through the Islamic ages, as well as that it inspired the architectural shape of some of the tombs in France.”

He added, “Once the Paradise Axis is completed, monumental buildings there will eventually collapse as the soil is weak. The National Authority for Civil Coordination — which is the authority responsible for any restoration, construction or demolition work within the scope of Historic Cairo — has not been mentioned anywhere, which proves that the project was not submitted to the authority for studying and approval.”

Lafi noted, “The change that will take place in the Tombs of the Mamluks will alter its architectural homogeneity, which could result in striking it off the World Heritage List, as happened to the Pyramid of Djoser, which lost its spot due to a mistake in restoration [in 2014].”

Al-Monitor tried to contact officials at the Ministry of Tourism and Antiquities, but they refused to comment to the media about the project and the destruction of graves.