The continuous demolition of heritage and ancient buildings in Egypt raises the ire of archaeology experts who call on authorities to deploy more efforts to renovate and preserve the country’s heritage. 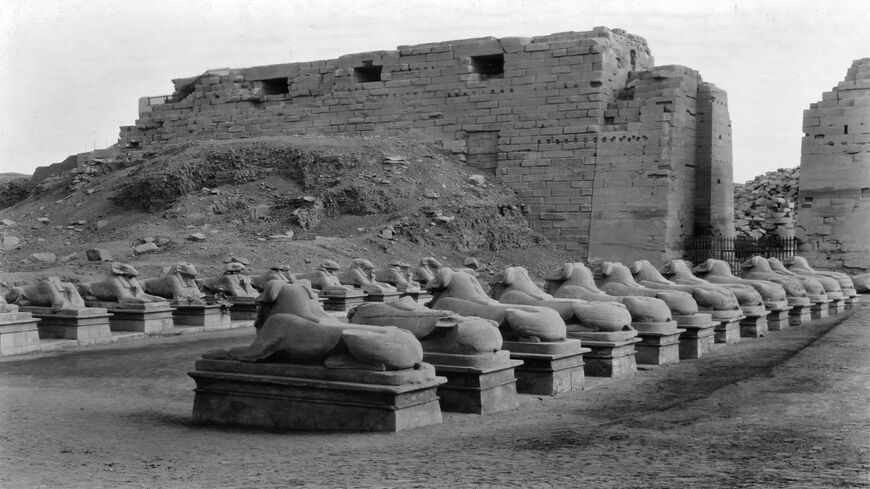 A view of Avenue of Sphinxes at the entrance of the Temple of Karnak, near Luxor, Egypt. - Hirz/Archive Photos/Getty Images

CAIRO — The demolition of the Andraos Palace in the city of Luxor in southern Egypt sparked heated debate and drew criticism, especially among archaeologists, because of the building's historical and heritage value and the important events it witnessed throughout history.

On Aug. 23, the process of removing waste and demolishing some parts of the famous historical palace overlooking the Nile River kicked off as part of a plan to develop the vicinity of the Avenue of Sphinxes, also known as the Road of the Rams, which is scheduled to be inaugurated in November.

Social media users circulated pictures of the demolition of the 120-year-old palace of Tawfiq Pasha Andraos and expressed their sadness at the ongoing demolition of historical buildings in Egypt.

Coinciding with the demolition of the Andraos Palace, Egyptian Prime Minister Mustafa Madbouly conducted Aug. 25 an inspection tour inside the Karnak Temple and on the Road of the Rams in order to follow up on the latest developments in the preparations to start the opening of the road project to tourists.

Once the Rams Road project, a 2,700-kilometer (1,680-mile) road that connects the Luxor and Karnak temples and houses 1,200 statues, is launched, Luxor city will become the largest open museum in the world.

Mustafa Waziri, secretary-general of the governmental Supreme Council of Antiquities, said in a televised statement Aug. 25, “A decision was issued to remove the historic Andraos Palace in Luxor governorate, after it was on the verge of collapse as a result of excavations below it carried out by thieves, who are currently being prosecuted.”

Waziri continued, “The remains of a Roman temple were discovered under the palace. Excavations to find out more about this temple will take place within three days and are expected to be completed within four months.”

On Aug. 24, archaeological expert Emad Othman Mahran posted on his Facebook page a screenshot of the Aug. 5 decision of the committee formed by the Luxor governorate to remove the palace.

Archaeology and heritage experts rejected the demolition of the palace and called for its preservation because it constitutes part of the memory and history of Luxor governorate.

Suheir Hawas, professor of architecture and urban design at the Faculty of Engineering at Cairo University and member of the National Organization for Urban Harmony affiliated with the Egyptian Ministry of Culture, wondered about “the interest in demolishing a palace of this historical value.”

Hawas told Al-Monitor she was surprised with “the insistence on demolishing the historic palace although it represents one of the historical layers in Luxor.”

In 2013, Egyptian authorities found the bodies of Sophie, 82, and Lodi, 79, killed inside the palace. So far, the security services have yet to arrest the perpetrators. The two women are believed to have been killed during illegal looting or excavation activities.

On Aug. 23, Samir Gharib, former head of the National Organization for Urban Harmony, posted on his Facebook page a document indicating that there was a committee formed by the Ministry of Culture in 2009 to discuss the demolition of the palace, and it unanimously rejected the demolition. He noted that the committee included representatives of the National Organization for Urban Harmony, and was headed by Saber Arab, professor of contemporary history and head of the National Library and Archives of Egypt (Dar el-Kotob) at the time.

According to Gharib’s document, the committee recommended against demolishing the Andraos Palace because it represents a distinct historical and architectural value subject to the provisions of Law No. 144 of 2006 on the regulation of heritage buildings.

Regarding the historical value of the palace, Masrawy news website published a report Aug. 23 stating that the palace was established by Tawfik Pasha Andraos in 1897, and that it is one of a group of palaces of rare historical value. It contained several artifacts that were transferred to the archaeological warehouses in Luxor about 20 years ago.

The website’s report stated that Andraos hosted many prominent Egyptian figures, including Saad Zaghloul, leader of the 1919 revolution. Andraos stood against the English occupation authorities and the Egyptian government in 1921 and hosted Zaghloul in his palace, at a time the Egyptian government banned his ship on the Nile River from docking on any shore.

Monica Hanna, acting dean of the Faculty of Archaeology at the Arab Academy for Science, Technology and Maritime Transport, described the demolition of the palace as “unfortunate.” She told Al-Monitor that the palace was like a home for the people during difficult times and has witnessed many events in the past.

She said, “Ancient Egypt is crumbling due to the demolitions and the modernization of archaeological and heritage buildings [by painting some of them]."

She noted that if the demolitions continue, Egypt will lose its history, adding, “The dilapidated buildings must be restored, not demolished. If the Djoser Pyramid and the Pyramids of Giza become frail, shall we destroy them or restore them?"

In February 2019, Egyptian authorities removed the historic el-Anbarein market in Cairo, which is believed to have been established more than 900 years ago. In January 2016, the ancient villa of Zeinab al-Wakeel, wife of Mostafa el-Nahhas Pasha, who served as prime minister during King Farouk’s era, was torn down in Alexandria. The governorate in northern Egypt has also witnessed the demolition of other ancient buildings, including the Gustav Aegeon villa, Amir el-Behar villa, Cicurel villa and Aboud Pasha villa.