Egypt announced the discovery of a two-story house and an ancient furnace dating back to the Roman era under the destroyed historic Tawfiq Pasha Andraos Palace in Luxor. 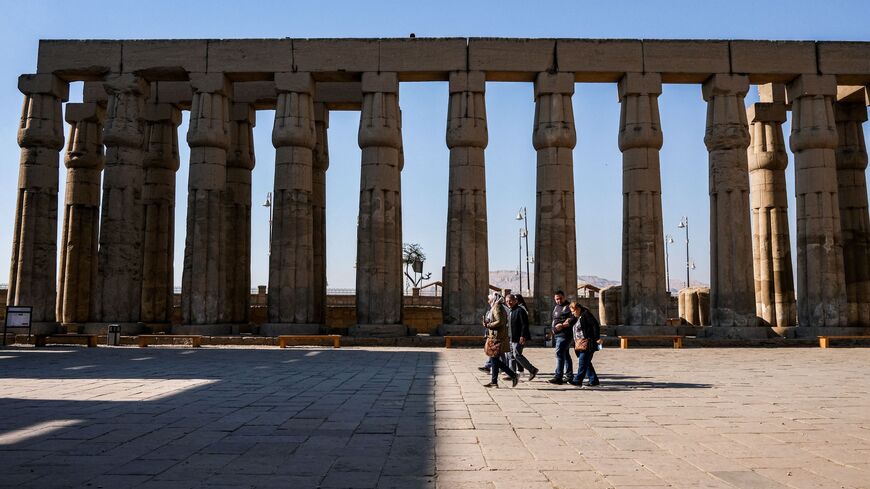 Visitors walk in the Court of Amenhotep III in the Luxor Temple in Egypt's southern city of Luxor on Jan. 20, 2022. - AMIR MAKAR/AFP via Getty Images

CAIRO — Egypt announced on Feb. 22 the discovery of new archaeological treasures beneath the destroyed historic Tawfiq Pasha Andraos Palace in Luxor governorate, in the far south of the country. A two-story house and an antique 4-meter-deep furnace dating back to the Roman era were unearthed under the palace.

Previous searches and excavations had uncovered a Roman temple and Roman bronze coins beneath the palace, which was demolished by the government in August 2021.

Secretary-General of the Supreme Council of Antiquities Mostafa Waziri said in press statements on Feb. 24 that the Egyptian archaeological mission discovered the antiquities as part of the excavation work beneath the demolished palace.

The 4-meter-deep, 1.90-meter wide furnace used to smelt metals is the first such discovery in Upper Egypt.

Waziri said that the excavation also found parts of a two-story house with stairs and walls dating back to the Roman era, and added that reinforcement operations are being carried out to reach more rooms of the house.

Ongoing excavations in the area have found a rare plaque depicting scenes of King Thutmose IV and King Amenhotep II providing incense and pouring water before the deity Amun on the throne.

Archaeologists also found vessels used for offerings, a plaque from the Ptolemaic period belonging to King Ptolemy III, a granite bowl and a large amount of wheat and lentils. An offering table was also discovered, and is believed to have served as the entrance to a shrine or temple.

The Tawfiq Pasha Andraos Palace, which was built in 1897 behind the Luxor Temple and facing the Nile River, has a historical value of its own, which explains the controversy over the government’s decision to demolish it on Aug. 25, 2021.

According to historians, the palace owner, Tawfiq Andraos, was an MP for Luxor, and many national figures were hosted in this palace, including Saad Zaghloul, leader of the 1919 revolution. The artifacts of the palace were transferred 20 years ago to an archaeological storehouse.

Wassim al-Sisi, an Egyptologist and archaeologist, told Al-Monitor that the archaeological discovery in Luxor is evidence that Egypt land is home to many antiquities and secrets, and what is unearthed is only a very small part thereof. He said that much remains to be discovered, especially in Luxor.

While Sisi said that the Egyptian archaeological mission has recently made important discoveries, he added that some were made individually, while others were in cooperation with international missions.

MP Tamer Abdel Qader, a member of the parliament’s Committee on Culture, Antiquities and Information, told Al-Monitor that the recent archaeological discovery will help bring back Luxor to the top of tourist attractions and will have a positive economic return. This, he added, is especially true considering the significant decline in tourism following the outbreak of the coronavirus.

He added that the archaeological discovery is a culmination of the state’s concerted efforts through the Supreme Council of Antiquities, and is part of the commitment to expanding archaeological research across the country.