After the demolition of the 120-year-old Tawfic Pasha Andraos Palace in Luxor, which drew much criticism, several Byzantine artifacts, including oil lamps, were recently discovered at the site of the palace. 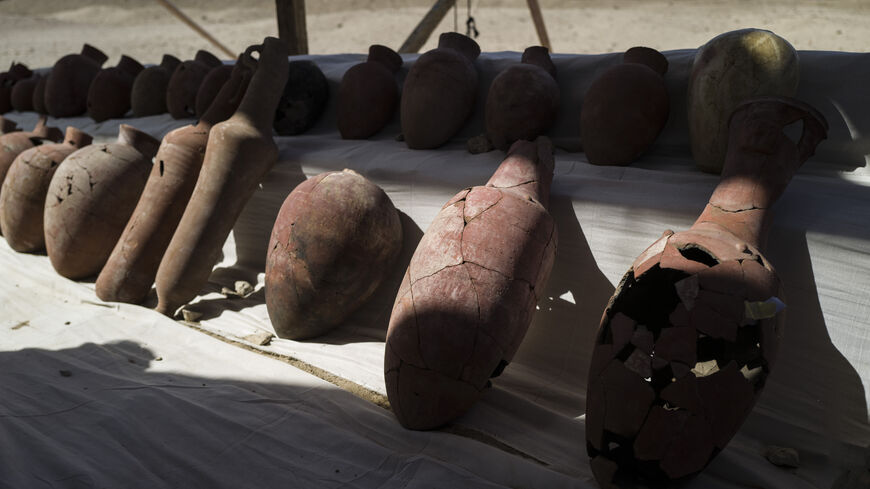 Items from an archaeological find in a 3,000-year-old lost city, are displayed on April 10, 2021, in Luxor, Egypt. Aten, "the lost golden city," is believed to be the largest ancient city ever discovered in Egypt and one of the most important finds since the discovery of Tutankhamun's tomb. After seven months of excavations, the team unearthed several neighborhoods which included, a bakery and administrative and residential districts. Jewelry, pottery vessels, scarab beetle amulets, and rooms filled with tools of daily life were also found, giving archaeologists a rare glimpse into ancient Egyptian life. - Mahmoud Khaled/Getty Images

CAIRO — An Egyptian archaeological mission working at the site of the Tawfiq Pasha Andraos Palace — which was recently torn down — has unveiled a number of amphorae and lamps dating from the Byzantine era.

Mustafa Waziri, secretary-general of the Supreme Council of Antiquities, said on Oct. 17 that this discovery is one of a series in the city of Luxor in southern Egypt. He said that excavations are being completed on the site.

In August, Egyptian authorities demolished the 120-year-old Tawfiq Pasha Andraos Palace, located near the Luxor Temple and overlooking the Nile River, based on a decision by the Ministry of Antiquities that archeological sites were under it.

The palace hosted Saad Zaghloul, leader of the 1919 revolution, after English authorities issued a restriction on his movement. It contained many rare artifacts and a gold-plated car, among other valuables. In 2013, the bodies of Andraos' two daughters, who were killed under mysterious circumstances, were found inside the palace.

The palace of Andraos, who was a member of the House of Representatives for Luxor from 1921-1935, is not the first to be demolished by Egyptian authorities. In 2009, the Mubarak government tore down the nearby palace of Yassa Andraos, the brother of Tawfik, as part of a plan to turn Luxor into an open museum.

But the move was controversial. “Even the Louvre Museum has monuments below it and was never demolished," Bassam al-Shammaa, an Egyptologist and a tourist guide, told Al-Monitor. "Nothing justifies destroying an antiquity for the sake of another, especially considering that Egypt has witnessed successive historical civilizations. It is just unthinkable to demolish an antiquity because there is another one below it.”

Shammaa added that the palace in Luxor was located steps away from famous Roman monuments in front of the first western edifice of the Luxor Temple. The most famous monument belongs to Emperor Hadrian and is dedicated to the god Serapis, a statue of which is located in the northwest corner of the courtyard of the Luxor Temple, very close to the Andraos Palace. The Roman monument, according to Shammaa, was built in 126 AD.

Ahmed Amer, an archaeological researcher at the Egyptian Ministry of Antiquities, said that the discoveries mark a new stage for archeology. The recent finds, he said, offer new details about the life of the ancient Egyptians, both religious and secular. He mentioned a large and varied amount of antiquities that have been discovered in the Saqqara region, south of Cairo, in recent years.

Also, in the city of Luxor was found the lost city or the “Golden City,” Amer added. All the antiquities that are discovered boost both science and tourism, he said, and many archaeological discoveries are scientifically examined but not presented to tourists.

Other recent discoveries under the Tawfik Pasha Andraos Palace, Amer said, include a set of Roman bronze coins, a part of a wall from the Roman era, and an old storehouse. The lamps are made of different materials, and pottery is probably the most common, he said.

According to Amer, lamps are dishes filled with oil and salt, on which a wick floats. Such lamps often depicted various scenes of daily life, animal images, and altered plant motifs. Oil is placed in the middle hole of the dish for lighting, with the wick sticking out from a front hole.