Neglect has turned the centuries-old site of what was once Baghdad's most prestigious cultural and scientific institution into a dusty old building suffocated by piles of debris and street vendors’ trolleys. 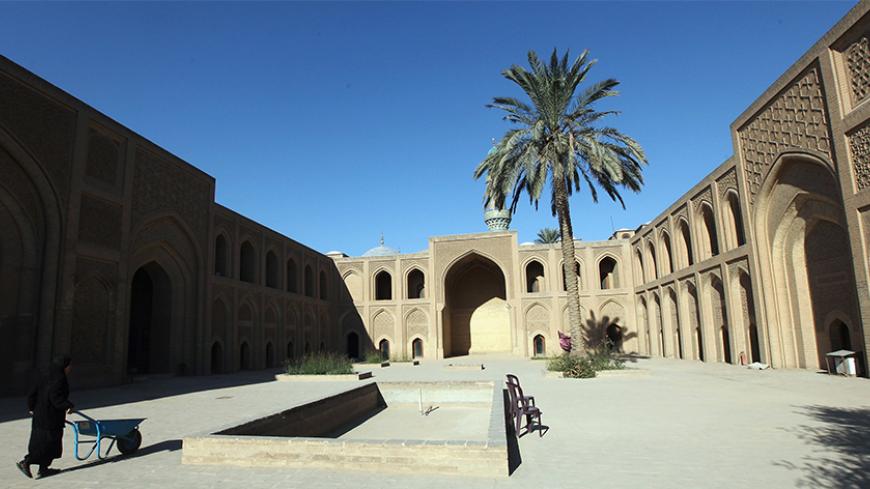 A woman works at Mustansiriya Madrassa, founded around 1230 and one of the oldest Islamic schools in the world, in Baghdad, Nov. 30, 2011. - Mario Tama/Getty Images

BAGHDAD — Many of Iraq’s prominent archaeological sites lie far away from cities, in the prairies and deserts, making them prone to neglect. Even famous sites such as the Nuffar ruins, the historic Kish city, Uruk and Ukhaidir Palace have weak security measures to protect them from antiquity thieves, and the places are not well developed for tourists.

But it's hard to understand the neglect of Mustansiriya Madrassa, a historic school building situated in the ancient Abbasid district of Rusafa in the very heart of Baghdad. This site has deteriorated right under the noses of antiquity authorities and the capital’s secretariat.

The madrassa was established by Abbasid Caliph al-Mustansir around 1230. It was a prestigious secular, scientific and cultural center comparable in importance to contemporary universities. The disciplines taught included mathematics, philosophy, astrology, Sharia and classical Arabic.

The building stands on the bank of the Tigris River, which flows behind the building. The carved interlace and writings in Arabic indicating Quranic verses on these walls are now concealed by dust. Its front facade, harboring a magnificent pointed-arch entrance, seems to disappear in a corridor surrounded by a multitude of shops and markets with narrow, winding alleys.

The madrassa building is lost amid raucous commercial chaos. The building's external enclosure was turned into a parking space for street vendors’ trolleys and stands. Thousands of shoppers pass by this historic monument every day but fail to notice its splendor amid piles of debris. Their neglect of the site is joined by that of the authorities in charge of antiquities and tourism.

Shoppers and merchants are overwhelmed by the concerns of daily life, while the authorities are preoccupied with a regime plagued by corruption, political and sectarian divisions and the costly war against the Islamic State.

In the 1970s and early 1980s, this archaeological monument had contributed to the flourishing coppersmith trade in the nearby bazaar, al-Safafir Souq, by attracting visitors when tourism in this area was at its peak.

However, this close relationship between the madrassa and handicraft activities has long faded. Baha Said, a coppersmith in al-Safafir Souq, told Al-Monitor, “An increase in the number of tourists visiting the madrassa would in turn boost commercial activity in al-Safafir Souq and al-Naher Street, which stretches out along the Tigris River.”

The historical significance of the madrassa, however, does not seem to interest Saad al-Hiti, a street vendor in the surrounding markets. As Hiti rested on a concrete bench next to the madrassa enclosure, he told Al-Monitor, “As far as I am concerned, this is a very old building of an old school and I never thought of visiting it, although I work in the nearby market.” He added, “I do not think it still retains its importance and standing. It is visited only by a few interested people, compared with the huge masses passing by.”

This description by an ordinary citizen illustrates the lack of government and popular attention to the ancient edifice. The state of neglect is further supported by photos of the trash at the front near the markets and along the bank of the Tigris that journalist Maad Fayad posted to Facebook on Dec. 20. In addition to all the debris, the building's entrance is being suffocated by new buildings and markets.

The madrassa’s entrance is only a few meters from the marketplace. One can easily find oneself spontaneously wandering into the madrassa hallways without the need for a guide. The madrassa is organized around a large rectangular courtyard. Around 80 ventilated hallways and rooms extend from the court through pointed-arch entrances, classrooms from the Abbasid era.

Students and teachers prayed in a mosque in a corner of the courtyard, in an isolated building with a towering minaret.

Al-Monitor toured the madrassa. Halim Yasiri, an archaeological researcher and history teacher in Babil, talked about its history. “Neglect started in the 1980s with the outbreak of the Iran-Iraq War and the allocation of the Iraqi budget to the war expenses. Iraq lost around $220 billion in this war. ”

Yasiri added, “After 2003, when Saddam Hussein's regime fell following the US invasion, and in light of the prevailing security chaos, some of the madrassa’s treasures were looted by thieves and armed gangs, including manuscripts and carpets, as well as the monumental water-powered clock.”

He pointed out that in the 1970s, the edifice was rehabilitated and its damaged walls were repaired. “But this was carried out by ordinary masons who repaired the damaged parts and removed the effects of dust and erosion off of the bricks, along with much of the edifice's original features,” Yasiri said.

Al-Monitor spoke to history teacher Hassan Hadi at the University of Babylon about the important role the madrassa once played.

“This madrassa is similar, to a large extent, to the modern science institutes. It covered all medical and religious disciplines, jurisprudence, law, philosophy, geography and history. This prestigious role makes it necessary to restore this landmark in order to preserve Iraqi history.”

The scientific and educational role of the school ended when Baghdad fell to the Mongols in 1258.

But despite the need to restore the building, there is a lack of funds allocated for landmark rehabilitation projects. Naim Hato, a member of Baghdad’s provincial council, said Dec. 12, “The council does not have a plan to preserve historical buildings due to lack of funding." A committee established by the council that included architects and artists and was in charge of the aesthetic embellishment of the city was also forced to suspend its work.

Meanwhile, Biriwan Mosleh, a member of the parliament's Higher Education Committee, told Al-Monitor, “The financial crisis plaguing the country has thwarted dozens of rehabilitation and development projects of historical regions.”

Al-Monitor sought the opinion of Shawan Daoudi, a member of parliament's Culture Committee, regarding the legislative authority’s stance. He said, “This obstruction of restoration projects of historical landmarks pushed the parliament to call on the government in October to take urgent and exceptional steps to develop the historical regions.”

Officials recognize that such development could benefit the entire district. The location of Mustansiriya Madrassa in Baghdad’s commercial district could make it a profitable investment project to restore a cultural, artistic and tourist center that could host festivals and aid the economy.