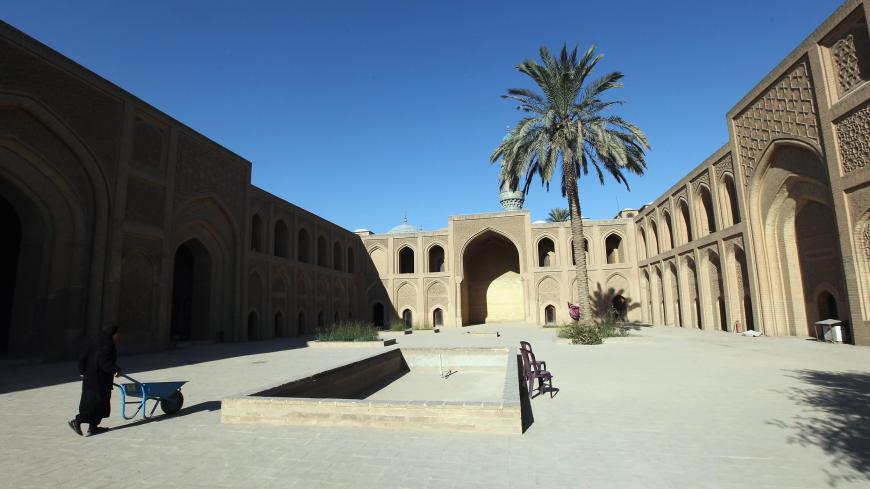 A woman works at the restored Mustansiriya University, founded in around 1230 and one of the oldest Islamic universities in the world, Baghdad, Iraq, Nov. 30, 2011.

Iraq's Ministry of Culture, Tourism and Antiquities announced Feb. 5 the launch of the rehabilitation project for Mustansiriya Madrassa, a historic school building established in the capital Baghdad during the Abbasid Caliphate in 1230. The ministry refutes the news of restorations in the historical structure that may harm its historical value. Recent photos had spread of four sewage pipes penetrating the complex’s external wall overlooking the Tigris River and surrounding Mustansiriya Madrassa from the back. The building seems to disappear in a corridor surrounded by a multitude of shops and markets with narrow, winding alleys, most notably the Khaffafin and Saffaren markets.

Mustansiriya Madrassa is one of the oldest universities in the world, and one of the greatest works of Islamic civilization. The university taught the sciences of the Quran, medicine and mathematics, at the hands of senior sheikhs and scientists in Iraq and the Levant. Only bright students were admitted to this university, which was home to 80,000 books.

Al-Monitor spoke to Iyad Mohammed Hamzah, director general of the Department of Maintenance and Preservation of Antiquities at the Ministry of Culture. “Mustansiriya Madrassa and the Abbasid Palace have been nominated to join UNESCO's World Heritage tentative list since 2014,” he said. “The modernization works and restorations are conducted in a scientific manner and within UNESCO conditions to boost Mustansiriya Madrassa’s chances in the global list.”

Regarding the details of the development work, Hamzah explained, “Efforts focus on eliminating the groundwater danger threatening the structure. The water level of the Tigris River, adjacent to the madrassa’s backyard, greatly affects the foundations, especially when water levels are high.”

Hamzah refuted what was published in the media about violations to the original madrassa building, asserting that all works in the minutest detail involve the use of the same original materials, with the developments being documented to identify the original and the new parts.

Hamzah noted that the last maintenance process of the madrassa was in 2013, within the scope of the project of Baghdad as the capital of Arab culture. “The new maintenance operation is being carried out according to a schedule set by the Directorate of Maintenance and Preservation of Antiquities, which includes the interior yard, the roof, inscriptions, doors, windows, rain drainage network and the external fence. This operation also includes rehabilitating a laser lighting network, treating water leaks in the structure and stopping moisture from creeping into the foundations.”

He explained that the environmental pollution resulting from traffic is the most important risk threatening the madrassa at the present time. “The madrassa is located in an area with heavy traffic. The complex seems to be lost amid raucous commercial chaos, with stores concealing its true value as an archaeological landmark," he noted.

Hamzah confirmed the ministry will address the shortcomings to transform the madrassa into a tourist and cultural landmark.

Mustansiriya Madrassa consists of a square structure, and in the middle of it is a large yard that leads to tiled corridors toward about 80 side rooms surrounded by arches. These rooms were used as classrooms in the Abbasid era and had windows for ventilation.

The former governor of Baghdad, Salah Abdul-Razzaq, who wrote several books and held seminars on the history of Baghdad, told Al-Monitor, “The madrassa was neglected during the Ottoman era and used as a warehouse for the customs department. Many of its features, decorations and inscriptions adorning its walls and doors were lost. The Directorate of Antiquities regained the ownership of Mustansiriya Madrassa in 1940, and inevitably sought to rehabilitate it.”

Abdul-Razzaq said the first maintenance operation took place in 1960 and focused on solving the underground water problem as the level of the school courtyard was lower than the level of the neighboring market. The courtyard was rehabilitated using yellow bricks. After the US invasion of Iraq in 2003, the madrassa was looted and sabotaged. It became a den of thieves and outlaws. In 2005, a UNESCO delegation and the United Nations Assistance Mission for Iraq visited it to inspect its conditions.”

To keep the name of Mustansiriya Madrassa alive, the Iraqi government established in 1963 a modern university — Mustansiriya University. Ghaith Salim, professor of ancient history and civilization at the university, said the madrassa was included in the World Heritage List as the historical center of Baghdad, which includes multiple sites.

Salim expects Mustansiriya Madrassa to successfully join the UNESCO list after the restoration works have finished. He told Al-Monitor, “This cultural landmark carries a religious heritage that tells the history of the Islamic schools that used it nearly 798 years ago, since the reign of the Abbasid Caliph Al-Mustansir Billah, who built the school from puddled clay.”

The head of the Culture, Tourism and Antiquities Committee in the Iraqi parliament, Sumaya al-Ghalab, summarized the national policy regarding Mustansiriya Madrassa and other archaeological monuments. “There is an emphasis on meeting all conditions to make sure the madrassa and other nominated sites make it to the World Heritage List,” she told Al-Monitor. “The committee calls for providing the necessary financial allocations and logistical support and exerts all possible efforts to prevent any harm to the monuments that document the history of the inheritance of Muslims. This is why it seeks to make sure all maintenance works are based on scientific and professional practices in line with international specifications and conditions.”

Tariq Harb, an activist who has written several books on the history of Baghdad, believes previous restoration works have hidden the traces of the Abbasid era and its architectural style. “Violations and urban sprawl continue to threaten the madrassa,” he told Al-Monitor, noting that the Mongol royals, the descendants of Hulagu Khan, who conquered Baghdad in 1258, would pray in this historical edifice whenever they came to Baghdad, before going to government headquarters.

Despite Mustansiriya Madrassa’s location in the commercial heart of Baghdad, which affects its cultural value, may be turned into its favor with good planning. The complex’s surroundings may be developed and turned into a profitable investment tourism project and a cultural and artistic hub. The madrassa itself may be turned into a historical museum that showcases the most beautiful eras of Baghdad. 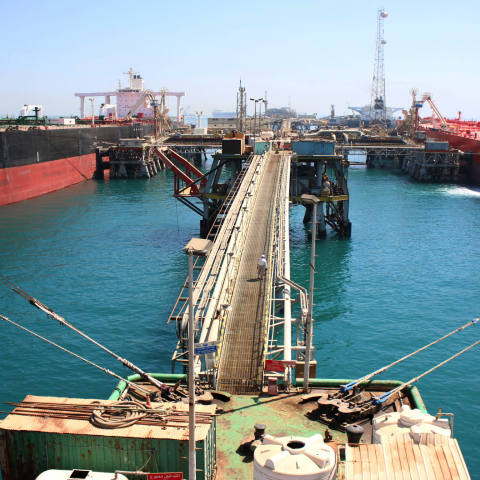