Cultural authorities are trying to revive tourism to Iraq's Babil, historic Babylon, after years of neglect and destruction in the area. 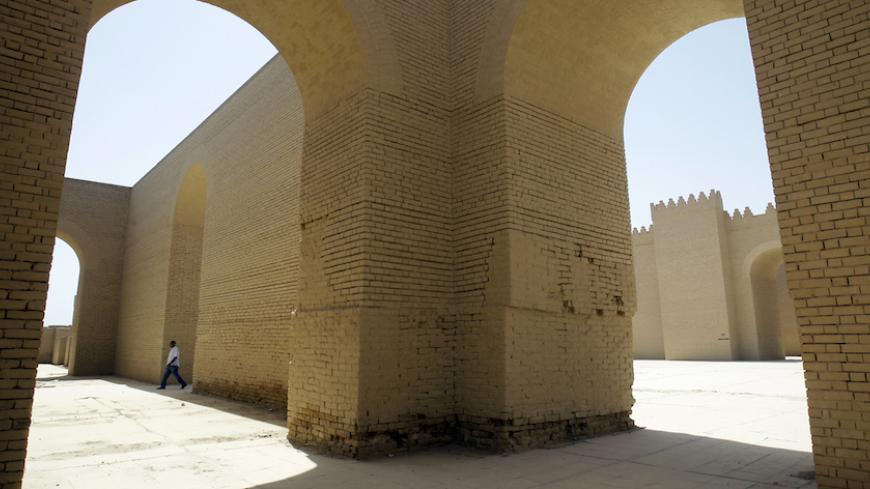 An Iraqi man walks at the archaeological site of Babylon, south of Baghdad, April 25, 2012. - ALI AL-SAADI/AFP/GettyImages

The ruins of the city of Babil, some 56 miles south of Baghdad, flourished as the ancient Mesopotamian capital of Babylon, founded in the 19th century BC. Since that time, the city has suffered from neglect, and poor treatment of its buildings and the very ground it was built on. There is now talk among Iraqi cultural officials of reviving tourism in the city.

Two events of the modern era greatly contributed to jeopardizing or destroying parts of Babil's ancient heritage. The first involved renovations under former President Saddam Hussein as part of his political-construction program. In 1988, some of the buildings were renovated in such a way that UNESCO protested on the ground that the changes threatened Babil's historic status. UNESCO removed the city from its World Heritage List that same year.

Jeff Allen, field manager for the Future of Babylon project, told Deutsche Welle on June 21, 2013, that work was underway to reinstate Babil to the UNESCO World Heritage List by removing all the modern renovations made to the city in 1980, such as concrete slabs at the Ishtar Gate.

The second event involved the US-led military invasion in 2003. The ruins were further harmed when forces of the Coalition Provisional Authority established Camp Alpha in Babil, destroying parts of the archaeological record with their use of heavy equipment, causing the destruction of some structures. The US military commander, Col. John C. Coleman, apologized for the damage done in April 2006. In June 2009, UNESCO released a report on damage to the city before and after 2003.

In an attempt to bring tourists back to Babil, cultural authorities are focusing on organized tours as well as promoting the city as a place for meetings and festivals. Of note, the city already hosts the Babylon Festival for International Cultures and Arts, held in the spring. It features poetry and fine arts events, as well as theater performances. The seven-day 2015 festival kicked off April 10.

“This festival aims to revive the city’s history and attract the world’s attention to visiting and preserving it,” said Ali Shalah, chairman of the Board of Trustees of the Iraqi Media Network (IMN) and head of the festival. He noted the participation of “Iraqi and international poets, musicians, painters and fine artists.”

Haleem al-Yasiri, an academic and archaeology expert, painted a modest picture of activity in the city. “The official and popular interest in the city is still not up to its historical significance,” he told Al-Monitor. “According to information from the historic city’s administration, the number of visitors does not exceed dozens per day.”

A history teacher from Babil province, Hassan al-Sultani, told Al-Monitor he was “honored to have set foot on the land of this great civilization.” He said, “Some people visit the city to experience this magic and grab a handful of small stones from the city’s soil, believing it will help them accomplish miraculous deeds.” He added, “Historically, the city’s name has always been associated with magic.”

Sultani pointed out, however, “In general, Iraqis pay little attention to the historical monuments from a perspective other than a religious one. Some look at Babil and other pre-Islamic historical cities as if they belong to a 'shirk' [polytheistic] civilization and thus should not be revered.” He said, “I heard a cleric say this.”

Journalist and writer Tariq Hussain told Al-Monitor, “Some Iraqis believe that the city of Babil has been deformed by an earthquake that turned it upside down. They also believe that God punished the city for corruption that had spread in 539 BC [Revelation 16:19], which led some [religious] scholars to forbid praying on its land.” On the other hand, Hussain noted, as had the history teacher, “Some people visit the city because they believe there is magic in its stones.”

Poet and writer Riad al-Gharib lives near the historic city walls. Speaking of the place he knows and loves, he said, “Babil’s intellectuals are interested in working to restore the city's glory through reviving tourism after Saddam's regime ruined its authentic landmarks with its renovation, which was not up to international standards and led to removing it from UNESCO’s World Heritage List.” Gharib stated, “Saddam built three high-rise palaces in Babil and engraved his name on their bricks as well as on the bricks used in reconstruction works in the ancient city, to make his name immortal.”

In the center of the ancient city, the Lion of Babylon, a symbol of the strength of Babil, still stands in its original place, although many other parts of this city's heritage such as the Ishtar Gate — now at the Pergamon Museum in Berlin — have been removed or smuggled abroad.

Wissam Taii, from the provincial council's information office, told Al-Monitor, “The local government in Babil is working on renovating the tourist spa surrounding the historic city that was home to Saddam's men. The idea is to turn it into a venue for weddings, graduations and other social activities and make it suitable for accommodating foreign tourists as well as a location for filming international movies and festivals.”

The head of local government in Babil province, Raad al-Jubouri, said, “We are working on portraying Babil as the historic capital of this country and opening the door for investment and exploration, especially since more than 80% of the city’s monuments are yet to be discovered.”

The city of Babil, like other Iraqi historical sites, has long suffered from neglect. The security situation has allowed the theft of untold artifacts, some of them still underground. Meanwhile, fears spread in 2014 that the Islamic State might raid the city and destroy its heritage, but that did not come to pass. Protecting and renovating the city’s cultural heritage will require an Iraqi effort supported by international funding and expertise.