As religious conservatism rises in Iraq, women are going beyond the hijab to show their religious commitment and membership in their communities. 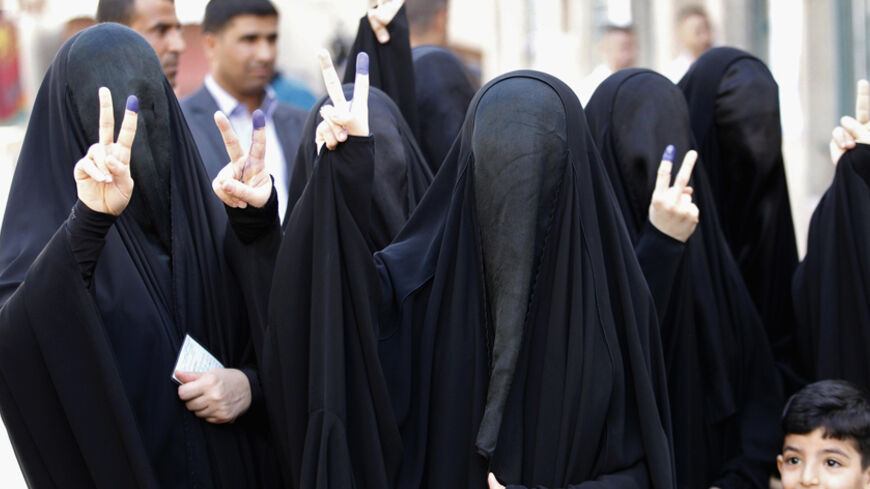 Veiled women gesture with their ink-stained fingers after casting their votes during the Iraqi parliamentary election in Baghdad, April 30, 2014. - REUTERS/Thaier Al-Sudani

Zeinab Ali, 27, is from the holy city of Najaf, the most important religious center for Shiites in Iraq. For her, a hijab is not enough to show her religious commitment. As a "muhannaka," she wears a veil wrapped around her head that goes under her chin and covers her entire body, showing only her face, while her hands disappear inside a pair of black gloves.

Many other Iraqi women have taken to wearing the muhannaka, and their number is rising, a reflection of the growing tide of religious conservatism in both Shiite and Sunni cities of Iraq.

Since 2003, when the secular-inclined Saddam Hussein regime fell, unveiled women have declined while the number of veiled women has risen. For the first time, the hijab has become common in media circles, governmental institutions and high-ranking government posts, as the previous regime had strict laws against Islamization and the role of religion in society.

The most prominent aspect of this change in religious visibility is seen among women, who have become more conservative in the way they dress. Indeed, the niqab, which covers the entire face, has become common in Sunni communities and to a lesser degree in Shiite communities. Muhannaka has become common among Shiite women.

Ali defines the term: “A muhannaka is a woman who wears Islamic dress and is keen not to show any part of her body, except for her facial contours. She should also cover her wrists and feet,” she said.

Cleric Hussein al-Yassiri, who studied theology in the Shiite seminary in Najaf and roams the cities as a preacher, talked fervently about a leaflet issued by the Public Library of Imam Hussein Holy Shrine in Karbala that outlines Islamic dress for Muslim women.

Yassiri told Al-Monitor, “Often, the muhannaka seeks to wear Islamic dress perfectly and convey the message that she is a religiously committed woman. She is a role model who should be emulated by Muslim women. The hijab is a religious obligation imposed by God on adult women from the nation of Muhammad, to guard their bodies,” he added.

Yassir stressed, “The muhannaka is the model of the religiously committed [Shiite] woman, as opposed to the munaqaba [a woman who wears the niqab] — a dress promoted by the Islamic State [IS] and Sunni radicals for Muslim women.”

Since 2003, public movements such as the "Wear it Right" campaign have worked to raise awareness about the correct way to wear the hijab. Streets in Iraq are filled with placards and banners hung on electrical poles and on high-rise buildings that depict how to wear the hijab and urge women to wear it.

In the context of the rising tide of conservatism, Umm Haidar (not her real name) told Al-Monitor, “I changed from being a munaqaba to a muhannaka in response to the obligations of the Shiite Islamic dress.” She added, “The muhannaka usually works as a reader of the Quran and religious poetry during religious and social events, such as occasions of grief or death.”

Umm Haidar said she considers the muhannaka the “better model for Muslim women and more appropriate for these times, compared with the munaqaba.”

Sunni cleric Hamdi Noman form Latifiya, south of Baghdad, told Al-Monitor, “The niqab or burqa is the Islamic hijab for women, covering everything except for the eyes; otherwise, women ought to cover their entire face.”

Researcher Sabrine al-Khafaji told Al-Monitor, “The phenomenon of muhannaka women started to spread in Shiite communities, and these women started to appear on satellite channels and in the media. They spread the teachings of the religion.”

Khafaji, who does not wear a veil, added, “The conservative tide has become prevalent in society, and the number of unveiled women has drastically declined.”

She added that during a public meeting, she met a cleric who told her confidently that not wearing the hijab is a Western trend that is not appropriate in Muslim Iraqi society. She said she did not respond to the cleric's comments and avoided the subject.

Najaf journalist Ibtihal Sumaysem told Al-Monitor, “The Islamic hijab ought to cover the woman’s entire body. This is the rule, while other forms of hijab are the results of "ijtihad," using an islamic legal term that means "independent reasoning."

Qassem Mozan, another researcher and an editor on the social affairs desk on Iraq’s Al-Sabah newspaper, on the other hand, holds a different point of view on the matter. He said, “All Arab and Islamic communities are surprised by the imposition of strict hijab and the covering of women from head to toe, depriving them of their femininity.” Mozan added, “For the first time, the historically opposing religious doctrines have converged on the issue of religious veiling and started to espouse certain religious trends that will, according to their beliefs, lead them to heaven.”

Hamza al-Kuraishi, an Islamic researcher from the University of Babylon, told Al-Monitor, “It seems that there are three models for Muslim woman today: the Shiite muhannaka, the Sunni munaqaba and the unveiled secular woman. The latter plays a minimal role politically and socially, given the tide of religious conservatism sweeping Iraq and the region.”

The hijab no longer reflects faith and commitment to Islamic teachings. It has rather become an indication of sect and a political expression of different parties and different ideologies. One can now easily see a woman’s political inclinations by the kind of hijab she wears.

The munaqaba is usually associated with fanatic Sunnism and affiliated with IS and other Sunni groups in the Western and northern areas of the country, while the muhannaka belongs to Shiite factions.