Hijab Wars Key to Role Of Islam In Turkey 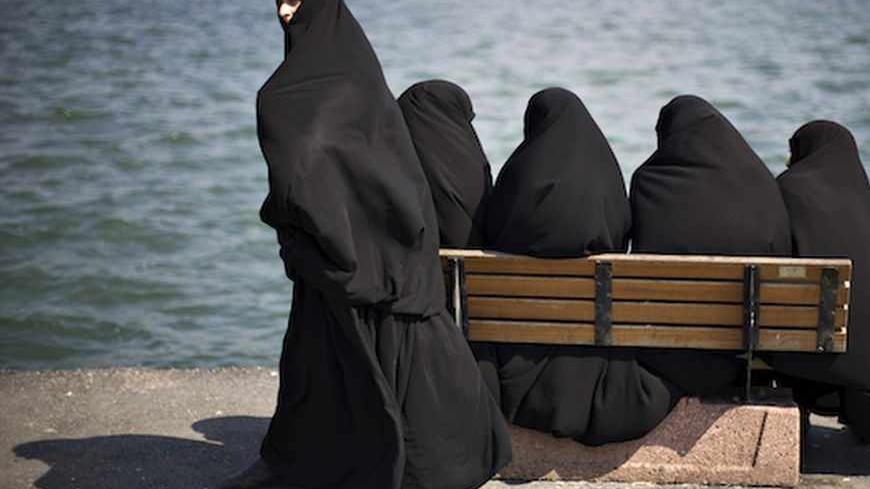 In an International Relations of the Middle East class of about 15 students, we shared images from different parts of the region; one was from a Turkish fashion magazine. The magazine’s target audience is observant Muslim women. We went through five or six photos of women (some Turkish Muslim celebrities and some foreign models). They were all in hijab (the dress code in accordance with the Islamic rules). One of the Muslim students said, “No, this is not hijab.” When asked why not, she replied, “It is not about the dress, but the pose, the makeup. This is soft porn.” Another joined her — a non-Muslim — saying, “If you are claiming to belong to a religion, you must observe adequately.”

These arguments brought forth by college undergraduates are not new. Indeed, a Somalian sheik living in Canada has coined the term "sin jaab hijab" — "sin" as in the English word and jaab from Arabic, meaning to bring forth. Sheik Said Rage explains how some styles of hijab are indeed against the modesty rule. In Turkey, it has been a significant and difficult battle for many observant Muslim women to participate in the public domain with a headscarf. The public spaces, i.e., schools, elementary and college alike, government workplaces — from courts to the army — have banned women from covering their heads. The hope of Kemalism was to modernize the country, and the veil (niqab) did not belong. Times have surely changed.

Since the 1990s, more women opt out of wearing the hijab. As a liberal, one cannot help but applaud their courage, and resistance in the name of civil liberties.  A  generation fought on college campuses for this right, and almost all had very bitter memories. It is easier to wear the hijab in the 2010s Turkey than it was 15 years ago. There are still numerous problems. In Turkey, there are no hijabi uniforms for soldiers, police, nurses, or lawyers. An observant Muslim woman can become a public employee much easier in the UK than in Turkey. That said, a rapidly growing number of women are now able to find employment in the private sector. Many still rightfully argue the ruling AKP has failed them.

As the impact of Islam becomes more visible in the scarves of these women, there are more and deeper divisions among them as well. The public rhetoric has shifted from the right to wear the hijab to "What is the good, acceptable kind of hijab?" The first debate was a useless one. Yet, the second one is critical. As the fight of Islamists center more around Eros than demos in the Muslims lands, through these explanations you can see the fault lines or shades of green in Turkey. Currently the society is divided into four main groups. The first or biggest can be called “Be patient and lay low.” They are mostly male and mute on the issue. Only when really pressured do they confess. Their thinking is, “We should now be patient as more and more women cover their heads. It has been forbidden for so long that, if a sister opts to cover her head, we should not worry about her style.” For this group, the “halal hijab” issue is not yet ripe. When the time comes, most of these people will join the second group.

The second group is the darkest shade of green, mostly salaffiyya (those who yearn to live true to Islam as their ancestors have, and not at all militant) and the fastest-growing group. They express their criticism openly in public. They detest all fashion magazines, but their dislike and embarrassment about Islamic fashion magazines goes deeper. When asked about the Muslim women posing for these magazines, or the hijabis who wear very tight outfits and heavy makeup, they reply, “This is not hijab.” Turning hijab into an accessory is despicable in their eyes. They see these “provocative” hijabis as opportunists who are not necessarily practicing Muslims but riding the tide to fit in to some circles. They also believe this is a result of the government’s ambiguity on Islam and secularism.

The third group, “seculars,” is generally quiet on the issue because they fear backlash. They are non-observant Muslims and the feminist women of Turkey. Knowing the winds are blowing against them, and afraid of being labeled a “Kemalist” and other things, they prefer not to comment. One lady who criticized a “provocative” hijabi on Twitter was scolded harshly: “You are not covered; are you even a Muslim to criticize the hijabi lady?” Here, one cannot help but wonder, does one have to belong to the group to have the right to criticize it? Feminists argue that, religious or not, women are abused to please men.

The last group is the “Kemalist hijabis,” a deliberate misnomer to highlight the strong remnants of the republic in the most unlikely places. They are the ones who pose in Muslim fashion magazines and want to make hijab “fashionable and appealing.” The reason for this term is that in their core mentality these women are extremely secular, primarily individualistic, economically independent and some may be enjoying a form of celebrity. When challenged about the fact that they are using the headscarf as an accessory and that they are not modest, these women reply, “It is none of your business. It is between me and Allah. I am free to dress as I please and observe my religion my way.” These women are well aware of the fact that their outfits would not be acceptable in Mecca, Tehran or even in some conservative districts in Turkey. Yet they do not believe they are un-Islamic. This mindset is quite unique to Turkey. As Turkish leadership yearns to reach out to the Ottoman lands, Kemalist hijabis openly express their opinion that a woman in niqab must be an Arab.

The debate about whether religiosity is on the rise in Turkey is passé. Rather, we now need to ask what kind of Islam does the post-AKP generation desire? It is wise to keep an eye on the slowly building tensions about the different styles of hijab and ask, "Who will “out-hijab” whom?" The AKP has been successful in generating much change, but the remains of the Kemalist mentality still dominate the minds of the elites. The public rhetoric indicates that the crevices between the salaffiyya and Kemalist Islamists are getting deeper. It will be worth following these debates to predict the political future of Turkey.