Ambiguous dress code regulations for students have generated angry protests from Islamist Turks — and troubled some secularists as well. 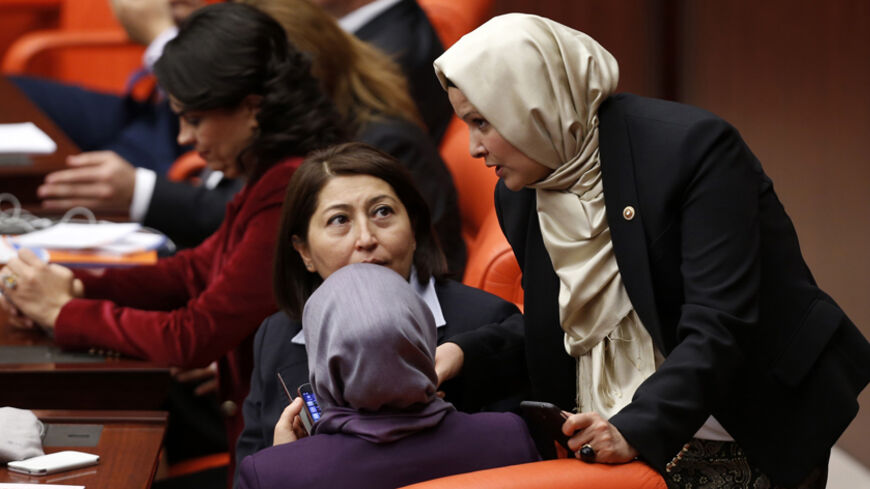 On Sept. 7, a group of conservative women and men brought together by a nongovernmental organization called Ozgur-Der (Freedom Association) held a protest at Sarachane Park in Istanbul. Some of the protesters were as young as 13 and almost all women wore headscarves. Their quest: freedom to wear the headscarf at any school level. Their slogans read: “New Turkey with old and constraining laws,” “Why can't I attend whichever school I prefer?” “Children are ours, not the state’s” and “Right to wear a headscarf now and everywhere.”

The headscarf has been a sore, highly politicized subject in Turkish politics for the last two decades. Hijabis — the women who prefer to wear the headscarf — suffered years of discrimination in higher education and government employment. The Justice and Development Party (AKP) has campaigned intensively since its establishment in 2001 against any ban that would limit Islamic freedoms, and the hijab was at the top of the list. In October 2013, a new law allowed women to wear the headscarf anywhere, except for certain professions with a uniform, such as police officers, soldiers or judges. It was a major accomplishment for hijabis. For the rest of the country, it was assumed that the headscarf would no longer divide the Turkish electorate.

Before the headscarf freedom law, in November 2012, another regulation allowed public school students some freedom of dress. Previously, all students from the first through the 12th grade had to wear a uniform; the November 2012 regulation eliminated this requirement for all public schools. In terms of allowing head coverings, the regulation was less far-reaching, suggesting that girls be allowed to cover their heads only at religious Imam Hatip high schools and during elective Quran classes. This angered many conservatives who felt the regulation did not go far enough in allowing the use of the headscarf. Ozgur-Der’s statement, read by its director Ridvan Kaya, was particularly harsh. Kaya said, “We warn the AKP and the Ministry of Education not to take steps against our beliefs and identity, including bans and coercive regulations in the name of expanding freedoms in this or that area. Our beliefs and identity are non-negotiable. Freedom of religion is a bleeding wound of this country.” Kaya made a crucial point: “Partial solutions will not resolve issues related to freedom.”

Can a secular country allow public school students to wear religious symbols and observe their religious values? In France, headscarves have been banned in public schools since 2004. Can the Turkish Ministry of Education exempt a Jewish student from attending class during the Yom Kippur holiday? Can students be allowed to wear a cross, Star of David, takke or kippah? Observant Muslims believe a girl reaching puberty must wear the hijab.

Seyma, a 15-year-old tenth-grader, told Al-Monitor, “I attend a private school. My mother is a hijabi but not my older sister. Once the hijab was legal and some of our teachers wore it, I wanted to wear it. I wear a hijab in the colors of my school uniform. In my school the policy against hijab is 'Don't ask, don't tell.'” Seyma’s mother, Ayse Akturk, told Al-Monitor, “After Seyma wore the headscarf, everyone thought I forced her. I had not forced her older sister. Why would I force Seyma? There is no coercion in Islam. We are respectful of personal differences.”

Both Seyma and her mother are well aware that the situation is difficult. Seyma’s older sister, Sena, told Al-Monitor, “I went to a public high school. There were only a few hijabis. They would have to remove their headscarf before entering the school. Even after October 2013, when the bans were lifted for teachers, students were told they could not attend the classes with a headscarf.”

Allowing minors to wear hijab is a tricky issue, and the government has chosen a gradual approach in which the public will be eased into having hijabis in elementary and high schools. Secular parties choose to ignore the issue, because it's a lose-lose situation for them. If they oppose the right of minors to wear the headscarf, they will be labeled as the enemy of Islam and against personal freedoms. In 2010, Kemal Kilicdaroglu, the chairman of the Republican People’s Party, said, “The headscarf may not be allowed for elementary or high school students. There are certain dress codes we all have to obey, just like a parliamentarian cannot attend a session in the parliament without a tie. We all must abide.” His words were used in conservative neighborhoods during political campaigns since 2010 to convince these voters that if it were not for the AKP, hijabis would not be welcome in public life.

However, if secular parties support the hijab for minors, they will alienate their own base. There is strong fear that minors from secular families — being more susceptible to school or peer pressure — will be coerced or convinced to wear the hijab. After all, conservative Muslim demands do not end there. There have already been requests for gender segregation for classes, complaints about girls and boys using the same stairs and cafeterias from the conservative sectors of society. On Sept. 15, Education Minister Nabi Avci made headlines with his attempt to clarify the confusion of whether Islamic worship is now a requirement in schools. Naci said, “Not all schools are required to have worship areas, just the ones that have a demand for a worship area are allowed to have it.”

The issue of the hijab for minors may not be present in the daily rhetoric of any political party. But the public debate is intense and continuous. One can find hundreds of comments on online public forums and over social media. Conservative media outlets frequently report about young victims of discrimination over the hijab, keeping the issue alive for these communities. These outlets complain that pro-AKP newspapers deliberately choose to ignore the suffering of these young girls.

Ambiguous democratization packages — the AKP’s most prized accomplishments — are indeed causing suffering for both the Islamic and the secular segments of society. The AKP has failed to guarantee freedom for everyone, handing out rights as rewards to certain sectors of society. The Turkish public is now brought to a juncture where it will decide if religious rights are more important than other human rights, and if so, which religion’s rights are the most important. While an Alevi 15-year-old is coerced into attending religion classes, her Sunni classmate is forced to remove her headscarf. Who benefits from their suffering?