The provincial council of Karbala is to vote to forbid the entry of unveiled women into the holy city, sparking resentment among the city's residents. 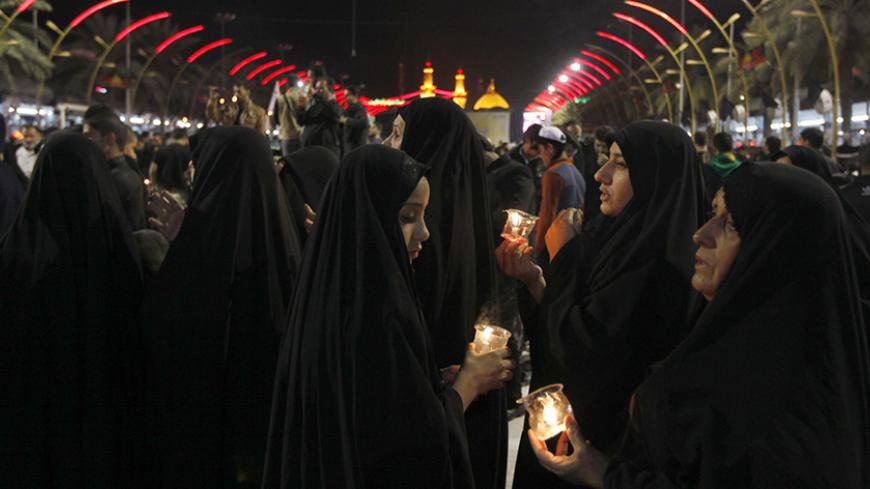 Ibtisam al-Hilali, a member of parliament for the Karbala governorate and member of the State of Law Coalition, led by Nouri al-Maliki, stated Feb. 12 that the governorate’s provincial council intends to pass a bill banning unveiled women from entering the holy city of Karbala.

While banners on the streets of Iraq's religious cities such as Karbala, Najaf and Khadimiya calling on women to wear the headscarf are a normal sight, this is the first time official figures and parliamentarians try to introduce a bill in this regard.

A parliamentary source who spoke on condition of anonymity told Al-Monitor, “Many blocs affiliated with Islamic parties are now trying to collect signatures to pass a bill that would ban unveiled women from religious areas. However, this was immediately rejected by parliamentarians, but the blocs are still trying to pursue their efforts to this effect.”

These endeavors might not be welcomed by the Iraqi community, which is governed according to the Iraqi Constitution instead of Sharia. Yet, it appears that some Islamic groups and parties are trying to impose Sharia on the different aspects of civil life. This might suggest the possibility of an imminent conflict between Islamic extremists and civilians seeking to live in a nonreligious state.

Sarwa Abdel Wahed, a parliamentarian for the Movement for Change, told Alqurtas News that some parties are seeking to impose political agendas and settle scores by trying to pass a law banning unveiled women from entering religious cities.

Calls to pass such a bill came one day after the statement of Nassif al-Khutabi, the head of the local government in Karbala governorate, pledging to take “severe measurements to impose a law on the hijab” in Karbala.

The recent uproar is a reaction to the visit of Maysoun al-Damlouji, a parliamentarian for the National Coalition, to Karbala on Feb. 5 without wearing the veil.

Damlouji responded to Khutabi’s statement, saying, “The provincial council of Karbala should have paid more attention to the cleanliness in the streets of the city instead of starting talks about the veil or the etiquette of my visit to Karbala.”

Currently, no rule in Karbala obliges women to wear the hijab once they enter the city. This is why some believe the local government is trying to restrict freedoms in the community for electoral purposes.

There are also fears that Iraq will be turned into a “hard-line religious state.” These concerns are based on a series of attempts to do just that, such as the law banning the manufacture and sale of alcohol passed by the parliament last October. Others also believe that post-Islamic State Iraq will be a country controlled by extremist Shiite parties.

The news about Karbala’s provincial council to pass a law on imposing the veil caused a split among the community inside the governorate. While politicians and members of the local government supported such a law, activists condemned it. Some of them appeared on TV to voice their opinion, considering such a law to be the extension of extremist ideologies in Karbala.

In this context, Samira al-Mousawi, a member of parliament for the State of Law Coalition, told Al-Monitor, “The issue of unveiled women in religious cities is brought up from time to time in the governorate. It is a controversial issue in terms of different opinions. I believe there should be a law banning unveiled women or imposing the veil before entering the city.”

The National Coalition, on the other hand, defended Damlouji, whose visit raised much controversy, and described the position of the head of Karbala’s local government to be “politically bankrupt,” seeking to make political gains away from professional ethics, according to Khadhim al-Shammari, the head of the coalition.

During her visit to Karbala, Damlouji did not visit the religious shrines. However, the position of the local government appears to be premeditated, in light of talks about setting forth other legislation, namely announcing the World Day of Chastity to promote the Islamic veil. Many parties are pushing in this direction.

In addition, Shiite clerics in Najaf have been campaigning to spread awareness about the need to wear the veil according to Sharia teachings. As part of the campaigns, veiling guidelines were distributed among girls in intermediate and secondary schools. A contest on the subject was organized with many prizes up for grabs, including a trip to the city of Qom in Iran.

Should the call to prevent unveiled women from entering the city of Karbala turn into an applicable law, members of parliament will have the right to interrogate the head of the provincial council and the governor of Karbala to identify the reasons behind this law, which could lead to its abolition, on the ground that not all Islamic teaching ought to be imposed on all community components.

In a country with multiple religions, sects and ethnicities, no specific religious doctrine or practice should be imposed across the social fabric, even if this was limited to certain areas only.