Is Saudi Arabia bringing sexy back?

The Saudi government's recent decision to open entertainment venues to promote internal tourism is drawing some solid applause, but critics say there are more pressing domestic issues to resolve. 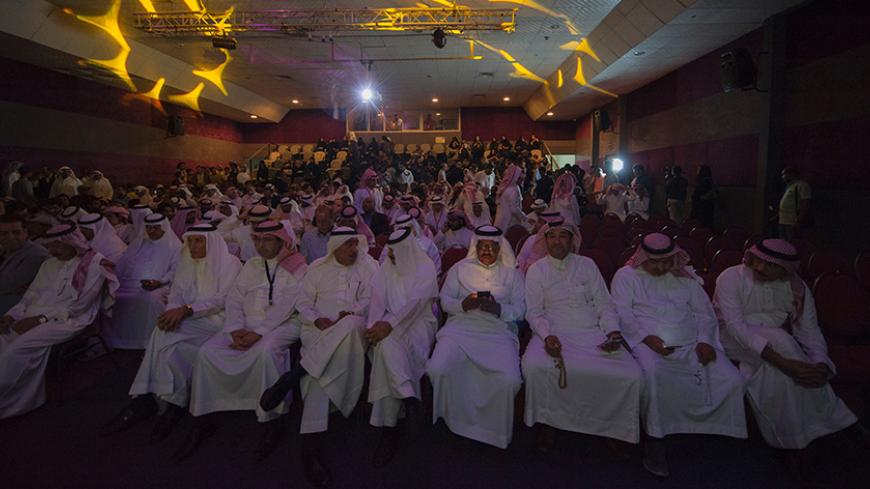 Saudis attend the opening ceremony of a film festival at the Saudi Cultural Center in Dammam, east of the capital, Riyadh, March 24, 2016. - HUSSAIN RADWAN/AFP/Getty Images

The Saudi Commission on Public Entertainment announced May 20 it will start issuing permits for movie theaters to open next year for the first time in four decades. The idea is getting mixed reviews.

Movie theaters have been banned since the 1970s. Before that, theaters were always surveilled and often subjected to raids by the Commission for the Promotion of Virtue and Prevention of Vice (CPVPV) to make sure movies did not contain sex scenes. Sometimes Saudis in Jeddah, Riyadh and Taif would unofficially show Arab, Indian and American movies in fenced-off areas in exchange for money. But Saudi authorities shut theaters down completely when an organization called “The Salafi Group That Commands Right and Forbids Wrong" seized the Grand Mosque in Mecca in November 1979 and declared that the Mahdi, the redeemer of Islam, had arrived. The siege lasted only two weeks, but the government subsequently enforced Islamic code more stringently.

The Commission on Public Entertainment is currently working toward opening comedy clubs in Riyadh, Jeddah and Dammam and will hold music festivals and shows. Although the Council of Senior Scholars appointed by the king still bans singing and music, it has announced its support for the king’s decrees without dealing with the issue of entertainment, as it hopes to avoid upsetting the king and his son Mohammed bin Salman.

King Salman bin Abdul-Aziz Al Saud established the Commission on Public Entertainment on May 7, at the same time he was issuing several other decrees that involved a major Cabinet reshuffling and ministry restructuring. The commission is charged with organizing and developing entertainment activities to encourage internal tourism, despite the presence of the Saudi Commission for Tourism and National Heritage, which was established in 2000 to attend to internal tourism and improve it.

During an April 25 interview on Al-Arabiya channel, Mohammed, who is the defense minister and head of the Council of Development and Economic Affairs, talked about his vision of entertainment for Saudi Arabia as a strong investment tool that will allow the kingdom to reduce its economic reliance on oil by 2030. When Al-Arabiya asked him what he wants to offer the Saudi people as part of the entertainment scene, he answered, “In terms of standard of living, the Saudi level of income is among the best in the world, but the problem is that citizens do not have many options to spend on entertainment.”

The public entertainment commission's goal of helping Saudis find suitable local venues in which to spend their money, according to Mohammed’s vision, caught the interest of Saudis on social media, where it has its own hashtag — #Entertainment Commission — and has generated mixed reactions. Some journalists and artists have voiced their support for the commission and believe it will foster Saudi artistic capacities. Some Saudi economists, such as King Faisal University economics professor Mohammed Al-Qahtani, think the commission will provide job opportunities for young people as Saudi tourists spend their money locally.

But some Saudis expressed their skepticism regarding the effectiveness of such a commission for several reasons. Citizens’ chronic problems and needs go beyond their thirst for entertainment. Economic adviser Barjas al-Barjas said Saudis are far more concerned about housing, health and social care. Islamist academic Mohammed al-Saidi, responding to claims that local entertainment will reap billions of dollars that Saudis previously spent abroad, pointed out that Emiratis spend a lot of money on entertainment abroad, even though they have plenty in their country.

The Saudi government paved the way for the entertainment commission in April with a decision that was no less controversial among conservatives: Authorities cut back the privileges of the CPVPV. The heads or members of the committee’s centers are no longer allowed to arrest people, chase them, ask for their documents or check their IDs. These tasks are now restricted to the police. The decision stated that CPVPV's duties will be limited to monitoring public attitudes and gently addressing people should it observe any behavioral irregularities in public places.

The king's Cabinet-reshuffling decisions included another controversial move: to bring back Sheikh Saad al-Shathri to the High Council of Senior Islamic Scholars and appoint him adviser to the royal court. Shathri was dismissed from his position in 2009 following a decree from then-King Abdullah, who was angry at Shathri’s objection to men and women mingling at social events and to holding music festivals on the campus of King Abdullah University of Science and Technology in Jeddah in western Saudi Arabia.

Saudi media outlets, as usual, welcomed the royal court’s recent decisions and called them huge achievements. They did not, however, give a convincing explanation to the public for two apparently conflicting decisions.

On one hand, the royal court establishes the Commission on Public Entertainment and welcomes concerts, movie theaters and entertainment groups where men and women mingle. On the other hand, the court brings back Shathri to the High Council of Senior Islamic Scholars, knowing that all the council's members, including Shathri, forbid music and mingling among men and women.

Shathri has made statements in support of reducing the CPVPV's privileges and praising Vision 2030, indicating that he has become more understanding of the new administration’s aspirations in Riyadh — and even more ready to provide religious justifications to support the kingdom’s decisions.