Saudi women recently launched a hashtag calling for an end to male guardianship, which has been behind many of the physical and moral violations they face in Saudi society. 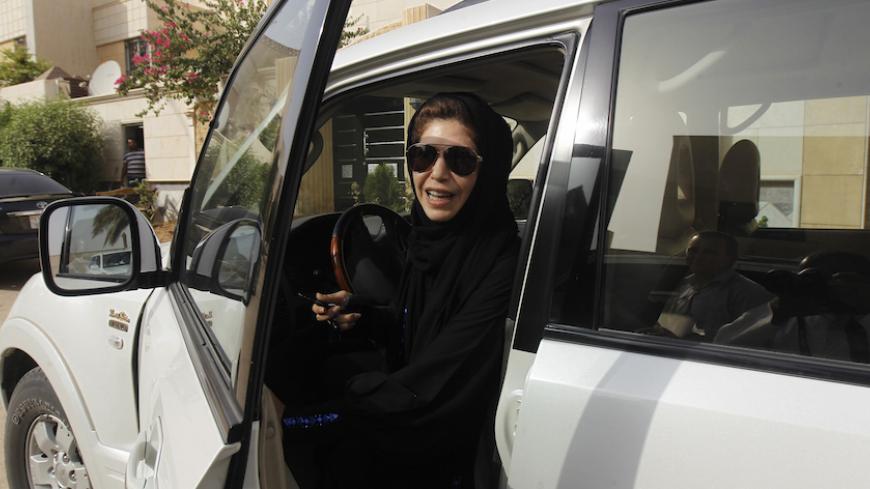 Female driver Azza Al Shmasani alights from her car after driving in defiance of the ban in Riyadh, June 22, 2011. - REUTERS/Fahad Shadeed

For three weeks now, the hashtag #StopEnslavingSaudiWomen has been active on social media. The newly established feminist association Saudi Women Against Marginalization, which took to Twitter in June, launched this hashtag. Meanwhile, the issue of ending male guardianship over women in Saudi Arabia remains highly controversial.

Saudi women are not just calling for the end of male guardianship in marriage contracts or the transfer of guardianship from one abusive husband or oppressive father to another better man who could be a brother or uncle, like it was for women a few years ago in some Saudi courts.

In fact, women are calling for dropping all forms of supervision and control from brothers, fathers or grandfathers as guardianship limits women’s freedom and willpower.

Saudi blogger and writer Hams Sonosi is one of the main advocates of this cause. On Aug. 11, she tweeted that the campaign to end male guardianship has achieved huge success on social media, although it has not led to a change of laws. She asked Saudi women to hold on to this legal and social demand.

Subsequently, the opposing hashtag #SaudiWomenProudofGuardianship appeared. Academic Amerah Saeidi is one of the main opponents to ending male guardianship. On July 30, she tweeted that the injustice of some guardians toward their proteges should be dealt with through legal solutions, not by dropping Sharia laws.

The nuclear male guardianship system is connected to the larger guardianship system of the ruler or king that is mentioned in the Saudi Constitution under Chapter 3 titled “Constituents of Saudi society.” This is where the problem lies. Article 9 of Chapter 3 states, “The family is the nucleus of Saudi society. Its members shall be brought up imbued with the Islamic Creed, which calls for obedience to God, His Messenger and those of the nation who are charged with authority; for the respect and enforcement of law and order; and for love of the motherland and taking pride in its glorious history.”

There seems to be a clear reference in the above article to the principle of loyalty and obedience to rulers or guardians, whether in the family, society or ruling institution — and those rulers or guardians are males. Saudi women’s obedience to their male guardians within their families is part of their obedience to the absolute guardian of the state who is the ruler or king, as per the Quranic verse An-Nisa:59: “O you who have believed, obey Allah and obey the Messenger and those in authority among you.”

Religious institutions in Saudi Arabia have often resorted to this verse as a warning to anyone who opposes the will of the guardian authority, either through demonstrations or in public comments. The Council of Senior Scholars had issued a statement in this regard on March 7, 2011. The verse was used to arrest Saudi citizens who had participated in the protests in Jeddah, in western Saudi Arabia, against the financial corruption and poor infrastructure after floods swept through the city in January 2011.

Saudi women calling for an end to the social and legal male guardianship are also facing constraints from the Salafi religious institution. The latter helped the holders of absolute guardianship, i.e., Saudi kings, to rule and expand their authority since the time of the Diriyah agreement between politician Mohammad bin Saud and cleric Muhammad ibn Abdul-Wahhab in 1744, who gave religious justifications for their military and political decisions. The Salafi institution believes that ending male guardianship violates religion. In this context, Sheikh Saud al-Shureem, a university professor and imam of the Great Mosque of Mecca, tweeted July 30 that demanding an end to male guardianship violates Sharia. Thousands of followers liked his tweet and supported it.

For his part, Abdullah al-Hamed, one of the key founders of the Saudi Civil and Political Rights Association, had tweeted on Nov. 30, 2012, that the people are their own guardians and the king is their representative, which means that the absolute guardianship of the king must be dropped. He also called for establishing a constitutional monarchy, whereby the people rule through their elected deputies. Due to his stance, Hamed was arrested on the grounds of defying the absolute guardian (the king) and sentenced to 11 years in prison in March 2013.

It is true that Saudi women were granted some rights in 2009, such as the right to occupy certain state positions, when late Saudi King Abdullah bin Abdul-Aziz appointed Norah al-Faiz as the deputy minister of education and decided in September 2011 that women should join the Shura Council. He also allowed women to choose the profession they want — such as accountants and vendors in shops selling food, perfumes, cosmetics and phones — without the approval of their guardian.

However, Saudi women still suffer many social violations within their families, mainly from their male guardians, whether their husbands, fathers or brothers. These violations include physical assault, preventing them from getting married so that the guardian can continue to take the women’s salary if she is employed, or taking over their inheritance in case of the father’s death. Women are also given a hard time when visiting governmental departments if they are not accompanied by a male figure. Other violations in the workplace include sexual harassment and extortion from their bosses.

To add to the hardships women in Saudi Arabia face, the Saudi General Directorate of Passports (Jawazat) announced July 26 that a Saudi woman cannot travel abroad without her husband’s permission, even if she is traveling with her father. Saudi Arabia is the only country in the world where Saudi women are not allowed to drive.

As per Article 44 of the Saudi Basic Law of Governance, under Chapter 6 titled “Authorities of the State,” the king shall be the point of reference for the judicial authority, the executive authority and the regulatory authority. Accordingly, the king alone can change women’s rights situations in the kingdom within weeks, despite expected objection from religious authorities in Saudi Arabia. The king usually takes his decisions based on the economic and political interest of the rule in the kingdom and abroad, without taking into consideration the stance of the Salafi religious institution. For instance, in June 2013, a royal decree was issued to set Saturday as an official day off to serve the kingdom’s economic interests, despite the disapproval of several members of the Council of Senior Scholars, such as Sheikh Saleh al-Fawzan who objected to this decision, as he considers Saturday to be a day off for Jews.

Regarding the future of Saudi women, a Human Rights Watch report published on July 16 stated, “As long as Saudi Arabia maintains the male guardianship system in some way, it will remain in breach of its rights commitments and will not be able to fulfill the economic Saudi Vision 2030.”

In response to this report, a female member of the Saudi Shura Council told Al-Monitor on condition of anonymity, “You will soon see women in all fields of work in Saudi Arabia. They will also be able to drive cars. Saudi women have faith in the rule of Prince Mohammed bin Salman, because his political ambition will help them reach their demands.”