The death of Roula Yaacoub, a Lebanese mother of five who was beaten to death by her husband, has drawn attention to Lebanese activists’ fight to ensure women’s rights in the face of religious conservatives. 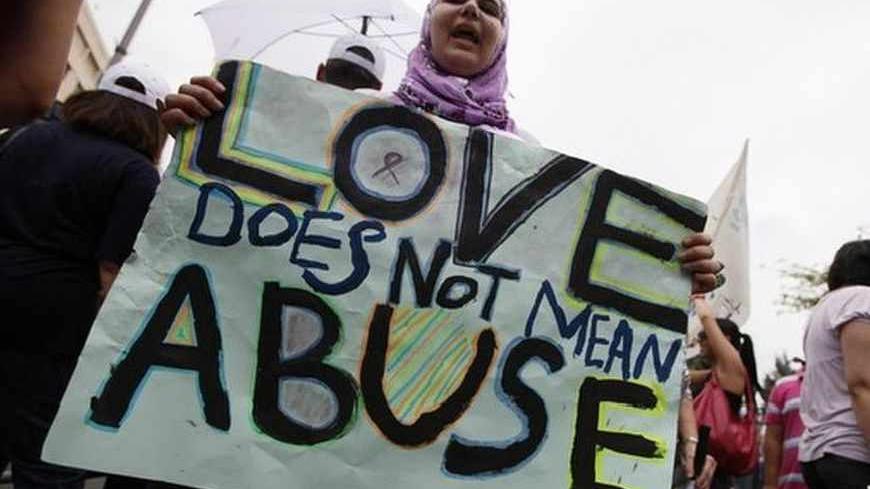 A female activist holding a placard stands among men during a protest against family violence near the parliament and government palace in Beirut, May 29, 2011. - REUTERS/Jamal Saidi

Two weeks ago, Lebanese women were compelled to recognize once again that they are left to be victims of violence in many forms — including murder — without any legislation protecting them or holding the aggressor accountable. The reason for that is the position of some clerics, who justify these views using religious convictions and concepts.

Roula Yaacoub was the 24th Lebanese woman to be killed in the past three years, and whose murder has thus far gone legally unpunished. It seems that she died from torture and abuse at the hands of a suspect who is none other than her husband. Lebanese laws lack explicit articles that protect women in this regard, under the pretext of religions, which have their own personal status laws in Lebanon and prohibit any modern legislation negating their religious provisions.

Roula’s murder, which took place in the town of Halba in northern Lebanon on July 9, has brought to the forefront the issue of the draft law on protecting women from domestic violence, which has been frozen for four years now and still provokes many absurd religious stances. In 2009, the preliminary draft law was drawn up by NGOs concerned with human rights and women’s rights in Lebanon. Under the pressure of these organizations, the draft law became a serious proposal and was put its last form by the Ministry of Justice’s Consulting and Legislation Committee in March 2009. Afterwards, the law spent years on the agenda of the Lebanese cabinet, which finally endorsed it on April 26, 2010, and referred it to parliament.

After more than a year, the law made it to a parliamentary subcommittee tasked with studying it. The committee held its first meeting in May 2011, and that was enough to flare up the situation. As soon as the subcommittee launched discussions, pressure from some Muslim clerics showered onto its members to the extent that the stances of some MPs seemed to be a reflection of what their religious authorities dictated.

On June 23, 2011, Dar al-Ifta, which is the religious Sunni authority in Lebanon, issued a statement reiterating the “unequivocal refusal of any draft law that violates the provisions of Islam under shiny titles, such as protection against violence.” The statement said that the law risks “disintegrating Muslim families in Lebanon and preventing children from being raised according to Islam, in addition to causing a conflict of competences between the concerned civil and Islamic courts.”

This statement came as a result of pressure from Sunni clerics who, days earlier, on April 17, 2011, staged a protest in opposition to the law on protecting women. The Islamic Association for Preachers, an organization of Sunni clerics in Lebanon, was the one calling for this protest.

During the protest, Sheikh Mohammed Bin Darwish Abu Qataa al-Naqshabandi delivered a speech calling for “dismissing the law from discussions, because it violates the sacredness of God and annuls Sharia provisions that humans have no opinion on.”

The protesters continued to unabashedly pressure the officials: on Dec. 4, 2011, they visited Speaker of Parliament Nabih Berri, asking him to withdraw the law. Following this visit, Naqshabandi said that “Islam is a religion that wishes to preserve the masculinity and manhood of the male, and every human being has rights.”

Despite the deep political rift between Sunnis and Shiites in Lebanon, clerics from both sects agreed on the refusal of the draft law. At the beginning of May 2011, Deputy Secretary-General of Hezbollah Sheikh Naim Qassem announced his opposition to an article in the law that stipulates the following: “Whoever coerces his wife by violence and threat into sexual intercourse shall be imprisoned for offense of domestic violence.” This article made both Sunnis and Shiites coordinate a movement rejecting women’s protection. On July 26, 2011, the Sunni Mufti reiterated again, “Muslims in Lebanon refuse a draft law that violates the Sharia provisions derived from the Quran and the Hadith, which protect and safeguard women and families in our society.” Then, on August 8, 2011, a meeting between Sunni and Shiite clerics re-stressed both parties’ rejection of the draft law that was considered to be inspired by “the directives of Western organizations and their dubious sources of funding.”

Based on all these stances, it becomes clear that the reasons for their refusal are as follows:

First, the clerics refuse because their authority on personal status laws is undermined. They are clinging to their status as the only authority governing the affairs of individuals and the family — outside the purview of the state’s institutions, even when the rights or physical safety of individuals are being violated.

Second, the clerics refuse the principle of equality between men and women stipulated in secular Lebanese laws because, through the lens of some, it negates the provisions of Sharia law. In that concern, verses 12 and 34 of Surat An-Nisa’ in the Quran respectively read: “A male shall have as much as the share of two females [regarding inheritance],” and, “Men are guardians over women.”

Third, and what is more complicated and problematic, is that the clerics refuse any clear and explicit secular law that punishes a man in the event that he physically abuses his wife or any woman that is seen as being under his control according to religious conviction. This is because according to some, this law negates the explicit aforementioned Quranic text (i.e., Surat An-Nisa’, verse 34): “As to those women on whose part you fear disloyalty and ill-conduct, admonish them (first), (Next), refuse to share their beds, (And last) beat them (lightly); but if they return to obedience, seek not a way against them: For Allah is Most High, great (above you all).” A number of clerics see, in accordance with this verse, that beating a woman is possible and permitted.

Fourth, the clerics reject that marital rape be considered an offense. This was mentioned in the aforementioned statement of Dar al Ifta, arguing that the suggested law on protecting women “introduces new crimes such as the heresy of the rape performed by the husband against his wife and the criminalization of this act.”

Sheikh Nabil al-Wazza, a media official from the Islamic Association for Preachers, explained this point in a speech on June 17, 2011, when he reiterated, “The obedience of the wife to the husband is an obligation in Islam.” Sharia refuses to consider “the coercion of a wife into sexual intercourse as sexual assault; this is the right of the husband.” Wazza based his view on a statement attributed to the Prophet Muhammad, in which he says: “If a man invited his wife [to his bed] and she refused, the angels will damn her until the morning.” Wazza averred that “equality [between men and women] opposes the core of the Islamic faith.”

The issue here is also attributed to Islamic texts considering the coercion of a woman into having sex with her husband as the husband’s right, and therefore there is no such thing as marital rape, since the husband would in this case only be claiming what is rightfully his. Moreover, it is interesting that the head of the parliamentary committee entrusted to examine the draft, a Sunni lawmaker from the city of Tripoli and the former head of the Bar Association in North Lebanon, insisted on identifying rape as “the act by which a person takes what is not rightfully his.” By this definition, he intends to preserve the religious interpretation that considers forcing the wife to have sexual intercourse as a right exercisable by the husband.

On the other hand, women's organizations have demanded that rape be defined as an “act of coercively obtaining something” whether or not its involves the perpetrator’s wife. Moreover, a feminist activist recounted in a news conference in Beirut on July 23, 2011, that during one of the discussions that took place at one of the parliamentary committee meetings in which she was an observer, she heard a clergyman telling a story he witnessed and experienced. It was about a girl who was forced to marry a man she did not know and therefore refused to have sexual intercourse with him. According to the clergyman, the girl asked to be tied to the bed so that her husband could do it. Moreover, in the clergyman’s opinion, this incident is normal and it is impossible to consider this to be rape by a man of his wife.

Thus, after more than four years since the law was proposed, religious objections have succeeded in obstructing and preventing its approval. This is in addition to several other Lebanese laws making women victims of discrimination or ill-treatment under the pretext of religious beliefs and laws of God that human beings are not entitled to modify or replace.

In the meantime, these crimes continue to claim the lives of women: 24 women were killed during the period of examination of the frozen draft law. Furthermore, 473 domestic violence-related complaints were lodged by women in 2009 in Mount Lebanon, while 353 other complaints — including cases of beatings, abuse and attempted murder — were also lodged. The judicial rulings issued by the Lebanese courts in 2010, in all domestic violence cases without exception, led to no condemnation of the aggressor and to the cessation of prosecution against him. This is because for some, religious norms and social traditions prevail over missing legal texts.

The image of the sit-in organized in a square in downtown Beirut on Sunday, July 14, 2013, and called for by women activists following the murder of Yaacoub — who was beaten to death in front of her five children — stirred feelings of sorrow and grief. The protesters were less than a dozen, less than half of the number of women killed by domestic violence in four years. Meanwhile, massive crowds constantly answer the calls of clergymen, showing unconditional support.