A fatwa by an unofficial body on the number of times a husband must have intercourse with his wife sparked controversy on social media, prompting Egypt’s Dar al-Ifta to denounce the fatwa as it belittles women’s rights. 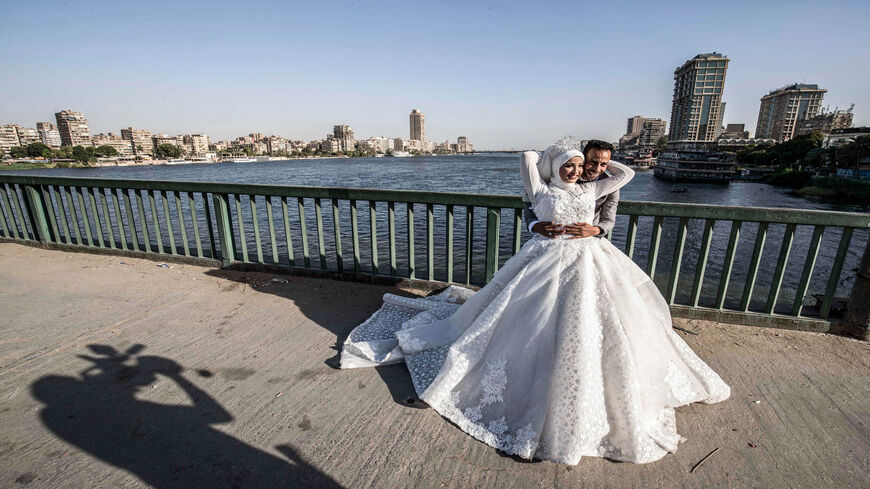 Ragab Uwais poses for a picture with his bride before a video cameraman for their wedding video along Al-Gamaa Bridge connecting the Egyptian capital Cairo with its twin city of Giza, Egypt, June 11, 2020. - Khaled Desouki/AFP via Getty Images

CAIRO — A fatwa on the number of times a husband must have intercourse with his wife according to Islamic law, which was issued Oct. 5 by a Facebook page concerned with issuing unofficial religious fatwas, has sparked controversy in Egypt in recent days.

The fatwa came in response to a question posted by a Facebook user on the Qutooff Fem page, an unofficial body, saying that her husband avoids having intercourse with her and claims that it is not his duty to do so, and she is embarrassed to keep asking him.

A sheikh affiliated with the Facebook page replied, saying that there are different views on this subject, as some say a husband should have intercourse with his wife once every month, while others suggest that he should do so once every four months.

The page shortly blocked comments and removed the share option for the post after all the controversy it sparked. However, the post had already gone viral.

The Egyptian Dar al-Ifta, the official body for issuing religious fatwas, said in a post on its official Facebook page Oct. 18 that Sharia made the intercourse between a man and a woman a common right between spouses, noting that neither of them can decide on their own, it needs to be consensual.

Dar al-Ifta cited Surah Al-Baqarah from the Quran, noting, “And women have rights similar to their obligations,” explaining that this noble verse indicates that both husband and wife have marital rights, including the right to have intercourse, which is not defined in a specific time frame.

Magdy Ashour, adviser to Egypt's grand mufti, responded to the controversial fatwa in an interview with "Al-Hekaya" show on MBC Egypt Oct. 18, saying, “Extremist ideology neglects women. Marital intercourse is reciprocal; both men and women should enjoy it.”

Ashour described the fatwa as “abnormal,” noting that its purpose is to draw people's attention, even if it is of false origin, as it aims to provoke, not raise awareness.

He denied all claims about the husband having to have intercourse with his wife only once every four months, explaining, “A husband should understand his wife from a single look and fulfill her desires and marital rights, without her having to ask.”

Ashour cited a scene from the life of the Prophet Muhammad when he went to the house of his companion Uthman bin Mazoon and found his wife’s clothes worn out. Aisha — one of the Prophet’s wives — asked her about the reason for that. The woman said that Uthman prays at night and fasts during the day and does not approach women. So the Prophet told him that he has time to pray, fast, approach women and advised him to follow his Sunnah.

“As long as there is no legitimate or health excuse, the husband must fulfill his wife’s desires, and vice versa,” Ashour said. “We at Dar al-Ifta are working on confronting the extremist ideology that perceives women as second-class citizens.”

Reda el-Danbouki, director of the Women's Center for Legal Guidance and Awareness, told Al-Monitor that this type of fatwa views women as a reproductive machine who does not have the right to enjoy intercourse.

He said many in society are affected by clerics whether they are concerned with issuing official or unofficial fatwas, which is why the state needs to take a stance and combat these unofficial platforms as they incite against women.

Danbouki noted, “It is necessary to warn these platforms to reconsider the religious opinions they publish, which may cause problems that are difficult to control or change later. Penalties should even be imposed on violators, especially since most of these fatwas are just unfounded [laws].”

Danbouki concluded, “All these steps will contribute to changing how society perceives women, who are often seen as inferior to men and merely a tool to serve their lusts.”