Remarks by a prominent cleric saying it is permissible to hit a spouse "to preserve the family" has sparked backlash against Al-Azhar. 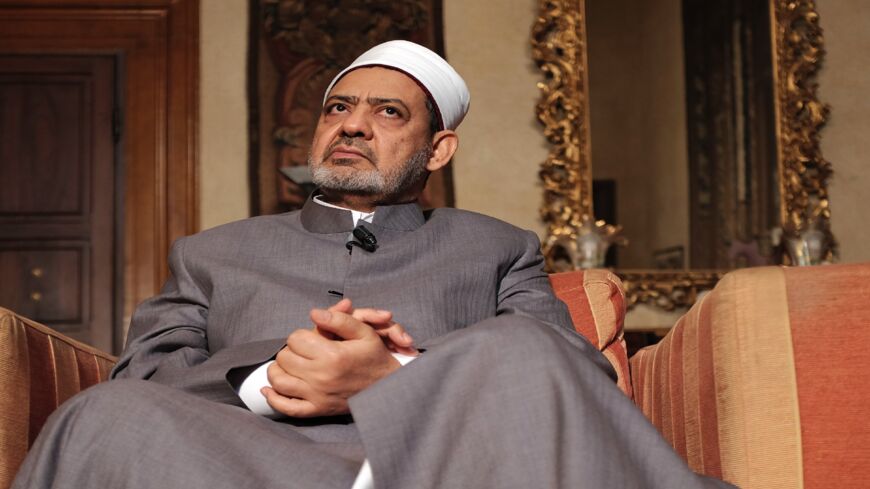 Egyptian Grand Imam of Al-Azhar Sheikh Ahmed el-Tayeb speaks during an interview with a journalist of the Agence France Presse (AFP) on June 9, 2015, in Florence. - ALBERTO PIZZOLI/AFP via Getty Images

The Egyptian parliament is currently reviewing a proposed amendment to Article 242 of Penal Code No. 58 of 1937, stipulating harsher punishment for domestic abuse and violence. If approved by the House of Representatives, an abusive husband may face a jail sentence of up to five years and a minimum of three years instead of the current maximum one-year sentence.

The amendment put forward by Amal Salama, a member of parliament's Media Committee, aims to curb the high divorce rates in the country. According to the Central Agency for Public Mobilization and Statistics, a total of 213,000 divorces were registered in Egypt in 2020, with one divorce case happening every two minutes. The previous year witnessed even higher divorce rates, with a total of 226,000 registered cases.

The proposed revision has stirred controversy in Egypt and prompted attacks on Al-Azhar Grand Imam Sheikh Ahmed el-Tayeb by women's rights advocates over remarks he made on Egyptian TV in 2019. This, after MBC Masr broadcast an excerpt from Tayeb's TV appearance on a Ramadan show three years ago.

In the clip, Tayeb says it is permissible for a husband to hit a disobedient spouse "to preserve the family."

"The Quran advocates symbolic beatings as a means of disciplining a disobedient wife, without causing her harm or injury," notes the sheikh. He cautions that "the spanking is not without limits. It is permissible on condition that no bones are broken and no organs are harmed."

Tayeb continues, "The husband should neither use his hand nor slap his spouse on the face; he should not cause physical or psychological harm to the woman. Rather, what is meant (by the Quranic verses) is a (light) tap on the wife's body with a miswak or toothpick." A miswak is a small teeth-cleaning twig that was used in the days of Prophet Muhammad.

The sheikh was clearly referring to a Quranic verse (Surat al Nisaa) that addresses disobedient or defiant wives: "But those wives from whom you fear arrogance, first advise them; then, if they persist, forsake them in bed. And finally, strike them. But if they obey you once more, seek no means against them. Indeed, Allah is ever Exalted and Grand."

While Islam does not promote or encourage violence or coercion against women, cultural practices in the patriarchal society sanction oppression and abuse of women to control and subjugate them.

According to the National Council for Women (NCW), the state body concerned with protecting women's rights, 86% of wives in Egypt suffer spousal abuse. In August, the NCW put the number of "women at risk of domestic violence" at 8 million annually. The statistic may be even higher considering that it is culturally unacceptable for battered wives to report incidents of domestic violence to the police.

Tayeb has come under fire in recent days over his 2019 comments on domestic abuse. In a telephone interview broadcast on MBC Masr Feb. 1, Islamic researcher and TV talk show host Islam Behery lambasted Tayeb. "With all due respect to the sheikh, his opinion does not concern us. Al-Azhar's role as a religious institution is merely consultative according to the constitution, and Egypt is a civil state," he said.

Behery, who in 2016 was convicted on the charge of contempt of religion for suggesting that Muslims should only be bound to the text of the Quran, continued: "He (the sheikh) is mistaken and his words are unconstitutional. There is no such thing as beating your wife on condition that you do not cause her harm or injury. "

NCW secretary-general Maya Morsy told MBC Masr that "husbands do not have the right to beat their spouses under any circumstance; we have laws that criminalize such abuse." She noted that the Prophet should be a role model for Egyptian men as he never resorted to violence or abuse in dealing with his wives.

"Although the [NCW] has not been consulted on the proposed amendment to the law, I fully support tougher penalties to curb domestic abuse," Morsy noted.

According to a statement released by NCW and published on Morsy's Facebook page Feb. 1, "There are no views and counterviews with regards to humiliating or abusing women; there is no good faith in relation to husbands beating their spouses — gently or otherwise. There are no laws allowing husbands to discipline their spouses. Hitting anyone is a crime punishable by law in Egypt. Sharia law too is against such action. If we are talking about an amendment to the law criminalizing familial abuse, then we need harsher penalties and the law must be enforced. If the battered wife or complainant chooses to forsake her right (by disengaging from the case), criminal proceedings against the offender must continue regardless. Domestic violence is the primary cause for divorce, which is soaring in our society. As for the comments by [Tayeb] with regards to husbands disciplining their wives by spanking them … if Egyptian men abuse their wives to discipline them, then the sheikh will have to bear responsibility for the consequences. "

Fatemah Khafagy, a gender consultant and former ombudswoman with NCW, warned that "violence has become endemic" in society. "It is not only husbands who beat their wives, but parents too beat their children and teachers beat their students," she told Al-Monitor.

"We need a societal debate on the proposed amendment to the law that includes civil society organizations and women's rights groups as there are several means of deterring domestic abuse other than prosecution and detention," she said. Khafagy cited teaching children tolerance at a young age and doing away with hate speech in the media as alternative options.

Amal Salama, the deputy who proposed the bill, said she was pleasantly surprised by the overwhelming support she received from male deputies for the suggested amendment. "The first to sign the draft law was a male member of parliament," she told Al-Monitor.

"Our aim is not to imprison men; rather, we want them to think twice before abusing their wives or resorting to violence," Salama said. "Nearly half of all divorces are caused by domestic abuse; our aim is to reduce the number of divorce cases."

"Statistics on familial abuse provided by the [NCW] are alarming," said Salama. "We are seeking to rid the society of this scourge."

"If Al-Azhar is not a legislative body, then most certainly you are," was one indignant tweet directed at Morsy. "If the words are not to your liking, you criticize the sheikh; this is God's Sharia and the sheikh only did his part, interpreting it."

"What I know and what we have learnt is that beating one's wife and chastising her is what Allah tells us to do in his Holy Book; those opposing this is opposing God not Sheikh Tayeb," read another tweet.

In response to the uproar, "The Voice of Al-Azhar," a publication owned and managed by Sunni Islam's highest religious authority, published on its official Facebook page another excerpt from Tayeb's 2019 TV appearance, clarifying the sheikh's position on domestic violence and arguing that his words had been taken out of context by some media. In this excerpt, the sheikh tells the audience that "beating anyone is considered an insult to the person and may traumatize and shame him/her until the day he/she dies." He also says, "I hope to live to see the day when beating an Arab Muslim is criminalized and the attacker is punished as a criminal."

Ahmed al-Sawy, editor-in-chief of the publication, explained that Al-Azhar had not been consulted on the draft law. He noted that "Al-Azhar is not a legislative body and is not responsible for issuing laws."