Women’s organizations have prepared a bill to fight violence against women, but the measure is likely to face religious and social pushback in Egypt's conservative society. 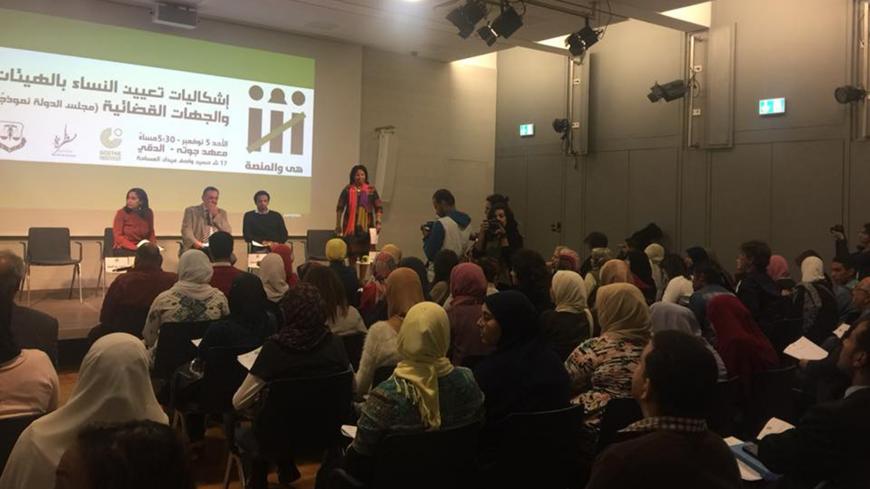 CAIRO — Women’s organizations in Egypt are fighting violence against women in the framework of the UN campaign “16 Days of Activism Against Gender-Based Violence.” The events kicked off on Nov. 25, coinciding with the International Day for the Elimination of Violence Against Women, and ended Dec. 10, International Human Rights Day.

The organizations include the New Woman Foundation, Nazra for Feminist Studies, the Center for Egyptian Women’s Legal Assistance, the Cairo Center for Development, the Women and Memory Forum, Al Nadeem Center for Rehabilitation of Victims of Violence, the Tadwein Gender Research Center and the Egyptian Female Lawyers’ Initiative.

In a joint press conference in Cairo Dec. 3, the organizations announced the formation of a rights task force to push for a new bill to fight domestic violence.

Statistics show that 5.6 million Egyptian women are beaten by their husbands or fiances annually. According to the National Strategy for the Empowerment of Egyptian Women 2030 issued by the National Council for Women (NCW) in 2017, 1 million women per year leave their homes due to their husbands’ violence, 25% of married women have suffered physical violence at the hands of their husbands, 19% of women have been psychologically abused and 4% have been sexually abused by their husbands. Most victims of domestic violence did not seek protection from the authorities, and only 5% received medical care.

Nivine Obeid, the director of NCW’s political participation program and coordinator of the task force fighting violence against women in Egypt, told Al-Monitor, “The task force is preparing for dialogue with key state institutions in Egypt like the NCW, the parliament and the Ministry of Justice. All parties will be called to discuss the draft of the bill and give feedback until approval by the Egyptian parliament.”

Amal Fahmy, the director of Tadwein, told Al-Monitor, “Current Egyptian law does not have a united stance on how to deal with violence against women. Instead, separate articles in the Egyptian Penal Code address sexual harassment, female genital mutilation and human trafficking.”

She added, “The penal code does not include the specific concept of violent crimes against women, especially domestic violence.”

Fahmy noted, “The proposed bill addresses this problem with passages about violence against women in Egypt, to be aligned with international treaties. For instance, the notion of rape won’t be limited to penetration by the male organ, as is stated in the current penal code, but will include any objects used to rape. The marital rape sanctions will also be updated.”

Under the draft bill, any person committing a violent act against female family members is to be either imprisoned for no less than six months or fined from 10,000 Egyptian pounds ($560) to 20,000 pounds ($1,120), or both. The draft bill also calls for prison terms for marital rape and sexual or psychological assault in conjugal relations.

Hafez Abu Saada, a member of Egypt’s National Council for Human Rights, told Al-Monitor that while he welcomes sanctions criminalizing domestic violence, he considers implementation a tough task in Egyptian society due to cultural norms that constrain social intervention in family relations.

He added, “I faced a dilemma when I was defending a woman in a slander case committed by the husband after she asked for help from the police because her husband had locked her inside the house. The policemen stood with me in front of the house without intervening to set the woman free because the husband denied them entry.”

Abu Saada continued, “Policemen in Egypt are convinced that marriage is sacred and will not intervene in marital problems.” He highlighted the importance of training police on how to handle domestic violence reports based on legal guidelines, rather than cultural norms, before passing new legislation.

The draft bill states that a special police unit be established to receive such complaints. In the case of wrongful dismissal of complaints about such crimes, the investigator would be liable for disciplinary action.

Amina Nusseir, an Egyptian member of parliament and Islamic preacher, told Al-Monitor that imprisoning a man who beats his wife in Egypt might face parliamentary and religious pushback. She noted that the threat of jail would not deter a husband without cultural repercussions. She added that Sharia calls for friendliness and affection in conjugal relations.

Speaking to Al-Monitor, Ahmed Karima, a teacher of comparative jurisprudence at Al-Azhar University, accused the proposed bill of seeking to sever family ties and of violating Sharia. He said, “The Holy Quran set procedures for settling marital disputes. First, the husband and wife turn to two members of their families, and if that does not work, peaceful divorce is filed while ensuring women’s financial rights and alimony.”

Karima added that encouraging police intervention in family matters and imposing penalties like prison and fines will make men more reluctant to marry and fuel spinsterhood, social fragmentation and fornication. He asserted that the best solution is to promote good marital treatment.

The human rights lobby that proposed the bill is likely to face more religious and social confrontation. Many provisions in the bill contradict other cultural norms in Egypt as well as Sharia in some eyes. The draft law would give women the right to an abortion in the case of divorce, abandonment by the husband or fetal abnormalities.