Egyptian NGOs launch a series of campaigns to combat violence against women by including sex education in school curricula. 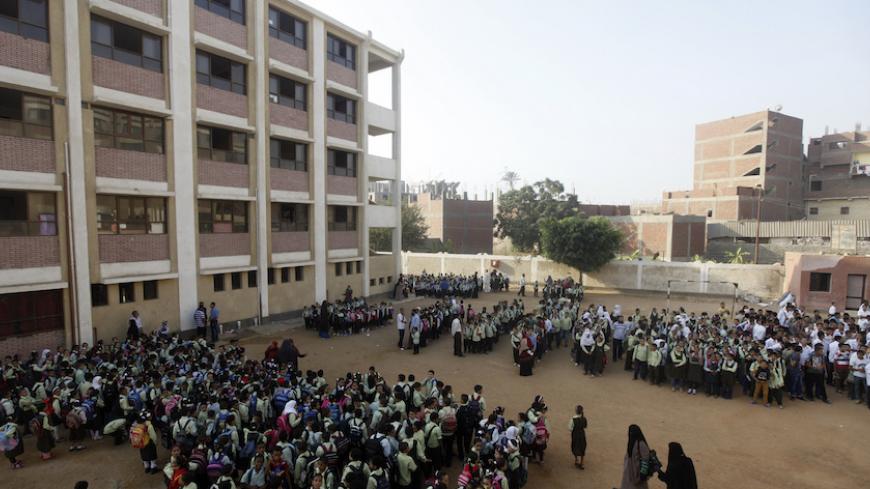 Students line up on the first day of their new school year at a government school in Giza, south of Cairo, Sept. 22, 2013. - REUTERS/Mohamed Abd El Ghany

CAIRO — On the first day of the UN Women’s annual 16 Days of Activism against Gender Based Violence campaign that began Nov. 25, a school-based sex education effort titled “Sexual education: a need, not a luxury” was launched to serve as an introduction to address violence against women in particular, in light of the misconceptions in Egyptian society where sex education is equated with teaching young men to have sex.

Some obstacles may hinder the campaign, however, such as Egyptian laws that do not provide real guarantees for comprehensive sex education or the lack of adequate information on the subject, according to a report issued by the Egyptian Initiative for Personal Rights in January 2013.

The campaign — launched by the Cairo Center for Development and Tadwein — uses the hashtag #NotAshame, indicating that it is not a shame to protect girls from female genital mutilation, educate children going through puberty and protect women from domestic violence. These slogans represented the basis of the campaign, which aims to raise awareness on the importance of sex education.

Amal Fahmi, director of Tadwein Gender Research Center, told Al-Monitor, “We chose the subject of sex education as an introduction to solve numerous problems related to reproductive and sexual health, [including] early marriage, the increasing phenomenon of female genital mutilation and HIV.”

She said, “The campaign aims to raise awareness about sex education through a series of videos, such as the 'Mind Map of Violence against Women' and 'People living with HIV are happy and productive people,' as well as by holding seminars including testimonies by survivors of violence and publishing articles about sex education.”

Fahmi believes this may only be achieved by addressing the minister of education and pressuring the ministry, then developing a general plan of how to integrate sex education in schools and benefit from the experiences of developed countries.

“The campaign would subsequently aim to codify and produce knowledge [regarding sexual education], integrate men as a primary partner in any efforts, make available information about women, and introduce women to the means that they can use when subjected to violence,” she said.

Fahmi stressed that sex education does not mean promoting sexual relations. “This provides students with vital information about [their] physiological changes and raises children’s awareness of how to act if touched inappropriately by someone, as well as on the need to speak up to their families without fear,” she added.

A report issued by Amnesty International on Jan. 21 confirmed that half of the Egyptian women surveyed had experienced some form of domestic violence, including beating, whipping, burning or being locked up inside the house.

The campaign titled “Bass Kifaya” (Arabic for “enough”) was launched under an initiative by the Women’s Center for Guidance and Legal Awareness, alongside a number of campaigns that aim to limit violence against women, such as #speak_up and "Qanun Nashaz" (Unfair Law).

Reda al-Danbouki, executive director of Bass Kifaya, told Al-Monitor, “The campaign aims to put an end to violence against women, whether married or single.”

He indicated that the state was involved in perpetuating violence against women, citing the decision of Egyptian Minister of Justice Ahmed al-Zened on Dec. 8 to require non-Egyptian men to deposit 50,000 Egyptian pounds ($6,385) into the bank accounts of Egyptian women they marry if the age difference between the two exceeds 25 years. Many activists say this winds up equating women with being property or is a form of human trafficking, and also is not enough of a response to prevent child marriage.

Danbouki stressed the need to promulgate laws that protect women from the various forms of violence, including marital rape, which is currently not recognized by Egyptian law. He explained, “Rape means sex under duress, where the woman does not consent or is incapable.”

“Sex education should include basic information about the physiological features,” he said, adding that mixed-gender schools must be encouraged. Danbouki also feared the state will not allow such campaigns, saying, “The state does not seem to allow anyone to talk about taboos, such as sex education, so as to avoid being criticized from the inside. The alternative is to resort to the objective independent media to discuss sex education topics.”

Azza Kamel, a women's rights activist and head of the Appropriate Communication Techniques Center aimed at empowering women, said the sex education campaign is a first step toward allowing children to discuss previously banned subjects. Kamel linked the success of the campaign to the availability of political will.

“Educational curricula must not be discriminatory. Emphasis should be placed on equality between girls and boys. The culture of violence against women is promoted when children are raised to be familiar with gender-based discrimination,” she told Al-Monitor.

Samir Abdel Fattah, a sociology professor at Ain Shams University, had a different opinion. He told Al-Monitor that sex education is a catastrophe. “Families are responsible for educating children and are fully aware of the topics of interest to their children.”

He added, “Children’s sexual education will produce violence. Sex should be discussed gradually, so as not to prevail over the other values. We fear this would undermine the system of values and morals called for by President Abdel Fattah al-Sisi on Nov. 25, 2015, when meeting the consultative council of experts and scholars."

“The phenomenon of violence against women and the persecution of their rights is exaggerated," Abdel Fattah added. "We are witnessing a major improvement of the status of women at all levels. Women’s partnership in the parliament registered a historical score with 75 female MPs.”

Attempts aimed at combating violence against women do not stop here. What is new this time is an attempt to eradicate the entire phenomenon by implementing sex education in schools. However, this concept remains ambiguous due to the lack of information and the absence of real mechanisms for its implementation. This appeared clear during Al-Monitor’s meeting with Fahmi, the campaign organizer.

She noted that the campaign preferred to wait to obtain official approval from the educational authorities before clarifying its strategy.

The campaign impact remains limited in the long term because of social pressures that prevent any talk about sex by conservative families, schools and clergy.