Small steps are being taken to change the mindset within Egypt’s judicial system when it comes to female victims of sexual harassment and rape. 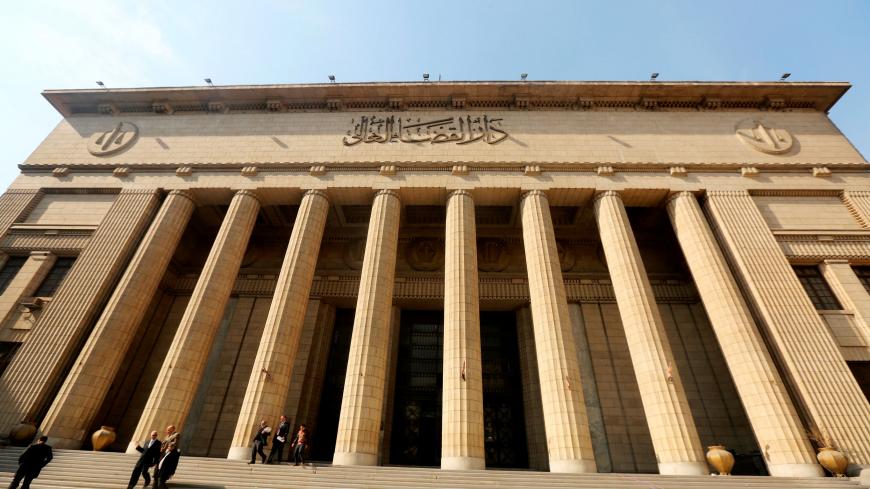 The Egyptian prosecution dismissed Nov. 12 murder charges against the teenager known as “Ayyat girl,” in reference to the place the incident happened. The 15-year-old had stabbed a microbus driver with the knife he used when trying to rape her. Others were not as lucky. A woman was slammed a life sentence on Oct. 30 for killing a rapist who invaded her home while her husband was away. Even though Egypt’s judicial system has recently begun to side with female survivors of violence, there still remain fundamental flaws.

“The Ayyat case must be generalized, as long as the woman is in a state of self-defense,” said Intisar al-Saeed, lawyer and founder of the Cairo Foundation for Development and Law. “There is no doubt that there is discrimination between men and women in the entire system — from the police, to the prosecution, to the courts and back to the laws themselves,” Saeed told Al-Monitor.

According to Saeed, gender-based violence cases are always regarded as low priority and those cases are mostly met with sarcasm from prosecutors. “‘Why don’t we leave the important work we have and work in family courts?’ they say,” she noted.

The lack of female prosecutors and units within police stations specifically for gender-based violence is problematic in another aspect. During the legal investigation, a violence survivor is asked to recall the incident up to six times, and some of its details may make a woman feel nervous or embarrassed. The nature of the questions the prosecutor asks requires gender sensitivity, Saeed stressed.

Azza Soliman, founder of the Center for Egyptian Women's Legal Assistance (CEWLA), shed light on another issue. According to Soliman, rather than being objective and doing their job, some officers express their personal opinions, saying to women filing a case against their husband for beating her, “You are the one driving him crazy.”

Upon filing a sexual harassment case, there is no protection of the victim and witnesses, Saeed pointed out. The accused is handed a copy of the official complaint with their information. They are threatened by the accused and their families. In 2017, after serving a two-year prison sentence, a sexual predator took revenge on the woman who put him behind bars; he cut her face open with a knife.

“Women shy away from going to the police station to file a complaint,” Soliman told Al-Monitor.

Those who pursue with the investigation face further obstacles in court. Soliman criticized the judges’ inadequacy in women's affairs, and being in the grip of customs and traditions. A woman could be suing her husband for domestic violence, and a judge would ask her, “So what? Why don’t you bear with it?”

Judges also often scold women who seek repudiation. Commenting on her physical appearance, a woman looking to divorce her husband for ignoring her sexual needs was told, “Can't you see that you do not look appealing?” Soliman recalled. Meanwhile, men can divorce women “and throw her and their children aside” in a blink of the eye, she added.

There is also discrimination in the practice of law. One example would be how Article 17 of the Penal Code enables a judge to provide leniency for a man who kills his wife or daughter over “honor issues,” while a woman who commits an honor crime gets the maximum punishment, in some cases a life sentence.

Another law that applies gender inequality is the Anti-Prostitution Law (Law No. 10 of 1961), which regards a female sex worker and the male client as crime partners. Yet, upon arrest, the man is treated as a witness and is released, Saeed said.

Even though the constitution dictates gender equality, judges publicly refuse the appointment of women. “These are the people who supposedly apply the constitution. Can you imagine the irony?" Soliman said.

Less than 0.7% of Egypt’s judges are women, according to a March 2019 report by the Central Agency for Public Mobilization and Statistics. The reasons vary. One judge declared that the nature of the profession does not allow for the appointment of women, because of their menstruation days, during which they cannot give proper judgments. Another judge is of the opinion that women cannot become judges since they would need to take maternity leave, as a pregnant woman cannot be at the podium. “This would affect the prestige of the judiciary,” he said.

Since 2010, the Convention on the Elimination of All Forms of Discrimination Against Women (CEDAW) and the Universal Periodic Review have been giving recommendations concerning training Egyptian judges in gender issues and international conventions of human rights, Soliman said. She added, “Judges are either ignorant of these laws or scared to implement them.”

Numerous laws need change altogether, she noted. The definition of rape relates to only penetration by the male organ, while many women have been raped by sharp objects, for instance, Soliman said.

Women’s rights advocate Elham Aidarous, a legal representative for the Bread and Freedom Party, told Al-Monitor that the Criminal Law does not cover all types of gender-based violence. “It deals with gender-based violence as if it takes one form: assault from a stranger in a public place,” she said.

The law also discriminates between male and female adulterers. A man is considered guilty if adultery is committed in the marital house, while a woman is guilty no matter the location. Punishment for the husband is six months of imprisonment, while it is three years for the wife. Also, Article 60 of the Penal Code gives a guardian, father or husband the right to “discipline,” which results in unchecked violence.

Nevertheless, Egypt has witnessed reform since the revolution in 2011.

“Prior to the 2011 revolution, there was complete denial of the harassment problem and violence against women. Anyone who dare spoke up was deemed a liar,” Saeed said. Girls started speaking up and took action against physical assault, in groups such as Operation Anti-Sexual Harassment, and organized themselves to combat the epidemic.

According to Saeed, further changes have taken place in the past couple of years. Rulings in harassment cases have become quicker and more just, she said. And even though she faces discrimination and disrespect as a female lawyer, prosecutors and judges “are always surprised when I push back with all my power.”

Some judges, usually from conservative backgrounds, seek out CEWLA and attend the organization’s workshops for insights into legal affairs in regard to gender-based issues. CEWLA provides new feminist dimensions, including applying Sharia, which the Egyptian Constitution specifies as the main source of legislation. “Their positive interaction gives me hope,” Soliman said.

In November 2018, women's rights organizations put forth a suggestion to introduce a new bill addressing all these inadequacies in gender-based violence cases, Aidarous said. The bill was adopted by member of parliament Nadia Henry, but is yet to be discussed in parliament.

The ruling regime has placed importance on women’s status in Egypt. In 2014, Article 306 of the Penal Code introduced penalties for sexual harassment, including imprisonment. The National Strategy for Combating Violence Against Women, a plan to confront gender discrimination in Egypt, was launched in 2015. The year 2017 was dubbed “Year of Egyptian Women.”

In May, female Judge Fatma Qandil was appointed to rule, among three others, in a criminal court for the first time.

“The priority should always be justice for the survivors, not propaganda or sending political messages. The process — from legislation to application — needs a gender lens,” Aidarous noted.

The interviewees all agreed that the Egyptian judiciary needs to breakaway from the shackles of patriarchy and misogyny. While shelving the Ayyat case, the Public Prosecution urged the survivor to “take care and not get involved with suspicious people,” and called on fathers “to look after their children.”