In a backlash against the women's movement in Egypt, one attorney is demanding the formation of a National Council for Men. 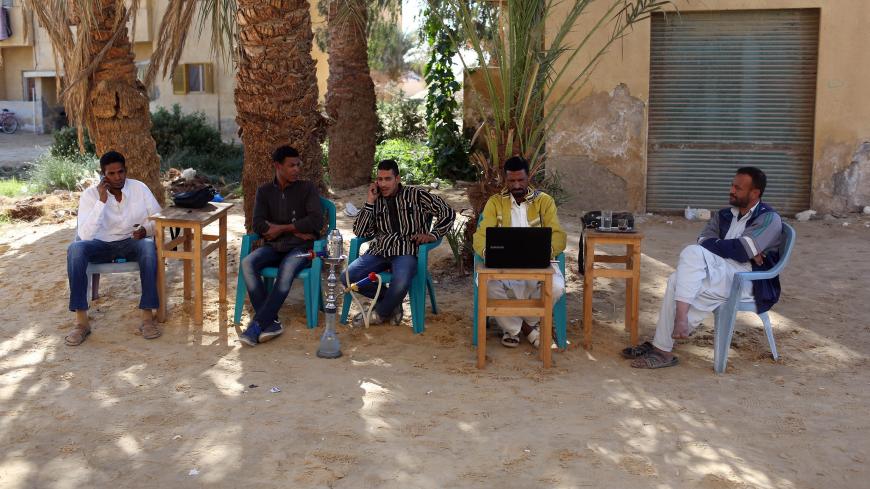 Egyptian men smoke and use their mobile phones as they sit at a small cafe in Siwa, Egypt, Nov. 22, 2014. - REUTERS/Asmaa Waguih

CAIRO — An Egyptian lawyer has called for the establishment of a national council to advocate for men’s rights. On the TV program “Hona al-Kahera” Feb. 14, attorney Essam Hajjaj said, “The national council will aim to support men harmed by the personal status laws issued during the last 20 years and passed with the support of the National Council for Women.”

He explained, “The personal status laws proved to be biased toward women, especially Law No. 1 of 2000 known as the Khula Law [permitting no-fault divorce] that completely destroyed Egyptian families, with a divorce case occurring every four minutes. Egyptian divorced women get custody of their children until they turn 15 while fathers get limited visitation rights.”

Article 20 of the Khula Law specifies that if two spouses do not mutually agree on divorce, the wife files a claim requesting khula, which waives all of her lawful financial rights. The provision has made it legally much easier for Egyptian women to get divorced, though they still risk losing everything.

On Feb. 10 on “al-Ashira Masaan” (Ten PM) on Egypt’s Dream 2 channel. Hajjaj had accused the National Council for Women (NCW) of harming men’s rights through its positions and laws it has drafted and endorsed since its establishment. “We have not seen a similar council for men's affairs,” he said.

“There will be no national council for the men,” NCW director Maya Morsi responded during the show in a telephone interview.

The NCW was established by a presidential decree in 2000 and operates under the president's office. It proposes general policies on women’s affairs to economically empower women, organize comprehensive development programs and submit proposals and observations to the administration.

Mona Ezzat, the director of the Women and Work Program at the New Woman Foundation, sees the call for a council for men as a response to women's issues having become so central to the public discourse. “Some argue that men also have their rights trampled upon, and this is not true,” she told Al-Monitor. “Gender-based violence exists. Women suffer this violence in addition to other public issues affecting both men and women. For example, both men and women complain of lack of public rights such as the need for a minimum wage, but women only face a gender-based wage disparity in favor of men in many jobs.”

Ezzat added, “Egyptian women face a patriarchal culture and are barred from certain public positions, such as judicial posts. This has resulted in an unemployment rate among women of 24% compared to only about 8% among men. The NCW and women’s associations are working to correct this injustice.”

For example, qualified candidate Omnia Gadallah applied for a judicial position at Egypt's State Council. Though Article 11 of the 2014 constitution guarantees equality between men and women, her application was not accepted for consideration. On Nov. 11, 2017, the Board of Commissioners of the Second Chamber of the Supreme Administrative Court refused to hear a case brought for the appointment of women judges to the council.

The chairperson of the Women's Center for Guidance and Legal Awareness, Reda al-Danbouky, said Egyptian society is fundamentally a male-dominated one and discrimination always works in favor of men.

“Calling for a national council for men cannot be serious, especially since women are still deprived of numerous rights,” he told Al-Monitor. “The penal code also discriminates against women in specific crimes concerning adultery and honor. Under the law, a man is only accused of adultery if his alleged act is committed within the marital home, while a woman can be accused of adultery regardless of the place."

Also in a phone interview on “Hona al-Kahera,” Alaa Abed, the head of the Egyptian parliament's Human Rights Committee, said, “Women and men are two sides of a single coin,” and stressed that women make up a crucial pillar of society.

Abed asked, “Is the man oppressed or subject to injustice? Are we a matriarchal society or a patriarchal society?” He said that the Egyptian street will not support such a council, adding, “The idea is not constitutionally enforceable.”

There are no statistics available from any government agencies or independent organizations on violations of men’s rights in Egyptian society. Meanwhile, women in Egypt — accounting for about 49% of the population — clearly face difficulties that men do not.

The Women's Empowerment Strategy 2030 drafted by the NCW and issued in March 2017 noted that in 2016, women made up 24.2% of the workforce. In 2015, the unemployment rate among women was 24%, and in 2016, the percentage of women in administrative positions was just 6%. In 2014, 4.1% of Egyptian women have been subject to sexual violence from their husbands, and 25.2% have suffered physical violence at the hands of their husbands. Almost one in five women aged 20-29 were married before the age of 18.