In an interview with Al-Monitor, the Women's Affairs Center director Amal Siyam talked about the political, social and economic obstacles women face in the Gaza Strip and the novel approach the center is taking to help them. 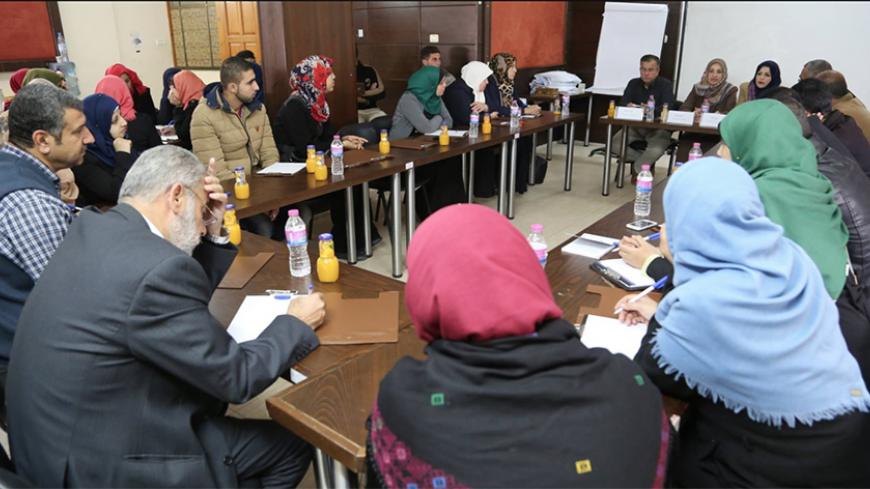 GAZA CITY, Gaza Strip — Despite efforts by women's rights organizations in the Gaza Strip to fight for their rights, empower them and change societal views of women as dependent beings, the director of the Women's Affairs Center in the Gaza Strip, Amal Siyam, said, “The process of developing the rights of women in Palestinian society is quite slow, as the community continues to hold onto customs and traditions that give men control and guardianship over women in most aspects of their lives.” She added that women's rights organizations have begun to directly target and confront men, instead of focusing only on helping women regain societal rights.

The center’s programs and projects serve women in marginalized positions, housewives, university students and women who have been victims of violence or whose rights have been violated. It focuses its efforts on deep-rooted problems in Palestinian society such as child marriage, denial of women's inheritance, domestic violence and divorce issues like child custody. It also aims to train women to achieve economic independence.

The center receives financial support for its projects from international development institutions such as Catholic Relief Services, the Swedish organization Kvinna till Kvinna and ActionAid, which is headquartered in South Africa.

Siyam, who has headed the Women's Affairs Center since 1997, finished a master's degree in business administration from Al-Azhar University in 2010. In an interview with Al-Monitor in her office in Gaza City, Siyam spoke about the main problems and obstacles that women's rights face in the Gaza Strip.

Al-Monitor:  What are the most important projects that you think women in Gaza need for a better future? Is it possible to say that efforts to empower women should be in partnership with men? What does the center do in this regard?

Siyam:  The center's main projects address the basic needs of Gaza’s women, their problems and their concerns, which are mainly related to social, political and economic problems, as the unemployment rate in Gaza has reached 41%. This [situation] has created many problems for women, including finding a job and competing with men for positions. In other words, women cannot get a sense of independence, which is why they feel the need to remain dependent on men.

Economic problems often lead to social problems. When the man of the house is unemployed, he pushes his daughters to marry young or forces them to drop out of school at a young age to start working in substandard jobs in order to help support the family. In addition, women face other problems like being denied their inheritance and their rights to divorce, while men continue to control their future, especially with regard to education and marriage.

In order to achieve progress in this area and help women restore their rights, we have found that the only way to succeed was to involve men in the center’s projects and programs alongside women, by giving them training and educating them on women’s rights and the impact of violating these rights on familial and social life. Thus, 50% of our projects now target men.

In this context, the center's role lies in educating women about their rights through training sessions and by providing free legal advice to inform them of their various rights, as we have noticed that many women are not even aware of their rights to begin with.

Al-Monitor:  How widespread is violence against women in Gaza? Do the government's executive and legal institutions protect women from such violence?

Despite these alarming statistics, the state’s executive and legal institutions do not provide enough protection for women from such violence for several reasons, most notably because the Palestinian laws are biased in favor of men. In this regard, the Higher Sharia Court Council in the Gaza Strip issued a decision on Feb. 7 granting husbands the right to file for divorce while denying it to wives.

In addition, women are ashamed to turn to institutions such as the police to seek protection from their husbands. This is why I believe protecting women from violence requires changing the way executive and legal institutions deal with women, and we need to encourage them to turn to state institutions for protection and in order to restore their rights.

Siyam:  Legal empowerment means educating women about their legal rights. The Women's Affairs Center has a legal department dedicated to this purpose, and in some cases the center appoints lawyers to represent women in courts pro bono to restore their rights.

Women face many issues in courts, most notably the long legal proceedings that may last for years before a final ruling is issued. In addition, bringing such cases to court costs these women huge amounts of money, which is why they sometimes give up for lack of financial resources.

Al-Monitor:  How does the government and legislative institutions deal with women's rights? Do they support them? How does this affect the situation of Palestinian women?

Siyam:  The efforts the official institutions employ do not rise to the level needed by Palestinian women, and civil institutions are bearing the brunt of the burden. The government’s intervention is often intangible, especially when it comes to social issues. There are little to no government projects to provide a source of livelihood for women, for example, or to protect them from violence.

Palestinian legislation is archaic and needs updating to adapt to modern society, like the 1954 Personal Status Law about marriage, which sets the minimum age of marriage at 17 for girls and 18 for boys. The problem with the law is that it grants the judge the power to allow the marriage of an underage girl, if she has reached puberty and her father approves, unless she is under nine years of age. This law is outdated and needs updating. Girls under 18 should not be allowed to marry, as this is the age of complete maturity and it is when a girl knows her family rights and duties.

Al-Monitor:  How did the Palestinian division and its subsequent lack of unified legislation under the dysfunctional Palestinian Legislative Council (PLC) affect Palestinian women’s situation?

Siyam:  The Palestinian rift in 2007 added insult to injury, and we ended up with two separate governments and judiciaries in Gaza and the West Bank. As a result, the PLC became dysfunctional, and laws and decisions were issued inconsistently between Gaza and the West Bank. This made the laws illegitimate. For instance, in April 2013, the Hamas-affiliated Change and Reform Bloc at the PLC issued a law banning the mixing of students and establishing all-girls schools. The decision — applicable only in Gaza, not the West Bank — does not help in building Palestinian society.

The Palestinian rift made room for laws that are not in line with the development of Palestinian women’s situation. It impeded any attempts for reform and any amendments to the inconvenient and archaic Palestinian laws.

Al-Monitor:  As a result of the repeated Israeli wars on Gaza, many women have had to bear the brunt of providing for their families after losing their husbands. What is the percentage of these women? What are the main obstacles facing them?

Siyam: According to the latest statistics issued in July 2014, 10.1% of women are [solely] responsible for families in Palestine. In the wake of the Israeli aggression on the Gaza Strip in 2014, around 800 women became widows, thus the only providers for their families and children. They face a life paved with hardship. Their families’ and children’s stability is compromised, and they are pushed to marry one of their deceased husband’s relatives for the sake of the children.

Some women get married at a young age before receiving a university degree. As a result, after the husband dies, they have to search for a job and for means to support their families. This is one of the worst scenarios.

Siyam:  Unemployment among women in the Gaza Strip has reached 63.3%, according to a local survey issued in February 2016. This rate is quite high, and therefore, small projects are important for women.

At the Women’s Affairs Center, we train, support and encourage women to have their own projects. This helps them achieve economic independence that enables them to provide for themselves and their families without needing anyone. Women receive education about how to start a project, establish it and develop it and market for their products. The center gives them zero-interest loans to launch their projects.

The center supports small projects for women, but only 10% of those are successful every year. Those that fail face obstacles like marketing their products and selling them amid a local market recession in Gaza. The Israeli blockade that has been ongoing since 2007 impedes women from exporting their embroideries to foreign markets. The price of raw material has also increased, not to mention the power cuts halting production.

Siyam:  Women’s limited participation in political life is related to culture, norms and traditions. Society does not consider women equal to men, both religiously and intellectually, and believes they are not competent to lead parties, people or organizations. Society views women as academically inept to assume leadership or pioneering roles. This is inaccurate because for each 145 Palestinian women who graduate from Palestinian universities yearly, there are only 100 men. These [numbers] reflect the improvement in women’s education in Palestine.

The real problem is the negative social perception to women in politics. Their presence is not wanted in this sector, but we are trying to change this by altering society’s stereotypical image of women. To address this issue, centers that support women must increase their political awareness and empower them to compete with men in high positions by developing their abilities and highlighting pioneering women’s experiences around the world.

Siyam:  Society ingrains the notions of women’s submissiveness to men. If women want to buy anything, they must get a man’s approval. This submissiveness is part of the social traditions and culture. But we assert that this is not men’s right. Women must feel independent and have the freedom to choose their paths in education, work, marriage and other aspects.

The center is trying to change this perspective by targeting men and women alike. We try to show the man that women have the right to choose and decide their fate. We raise women’s awareness of their ability to pick what is best for their interests and future. This empowers them to face life better and stop relying on men.