Divorced women in Gaza are frowned upon by society, struggle to remarry and are often discriminated against in the workplace. 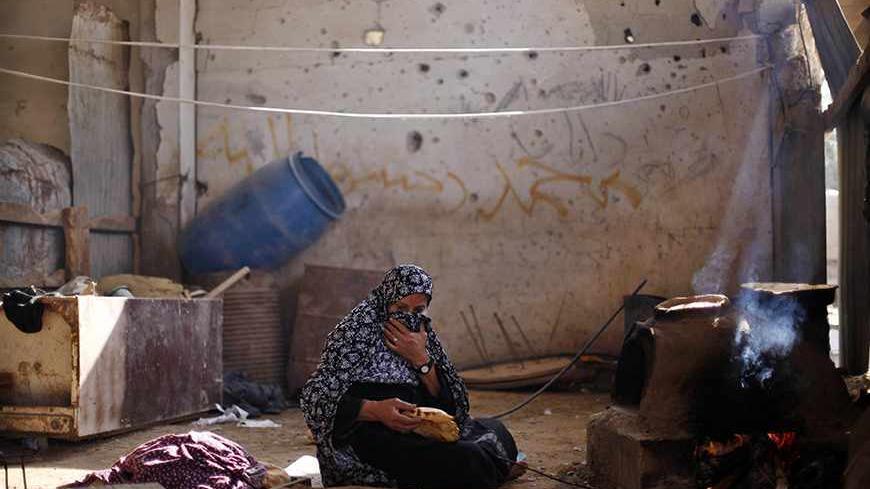 A Palestinian woman bakes bread inside her house, which she said was damaged during an Israeli air strike on a nearby smuggling tunnel during an eight-day conflict with Israel last year, in Rafah in the southern Gaza Strip, Nov. 13, 2013. - REUTERS/Ibraheem Abu Mustafa

GAZA CITY, Gaza — It was a bitter disappointment for Yasmine, 26, when she learned that the family of the man she loved was against their engagement because she was divorced after two years of a previous failed marriage.

Everyone knows that Yasmine's divorce was no fault of her own; she was just an unlucky woman. Yet, the way divorced women are perceived in Palestinian society pushes them to lead lonely lives, shunned in the public eye. This perception takes away their right to make free choices and move freely, to build social relations or find satisfactory jobs. They have heinous accusations hurled at them.

"I divorced my first husband after two years of marriage because of his bad temper, which was not his fault. Months later, I fell for another man, and he fell for me. When he told his parents he wanted to marry me, they accused him of being insane,” Yasmine told Al-Monitor.

Yasmine’s voice sounded strained as she gave the details of her story. She could not continue speaking for a few moments. "Was it my fault that I fell in love with someone? Or is it not my right to live a normal life like everybody else? Am I a stigma to my family and society for them to treat me this way?" she said through her tears. "I want a solution," she continued, wiping her face.

Al-Monitor spoke by phone with Youssef, 27, and asked him how his family reacted when he wanted to marry a divorced woman. For a second, he did not want to answer. However, he said, "My mother flatly refused to talk about it. She strictly told me, 'Have you any idea how you would look in the eyes of society if you married a divorced woman? I promise I will disown you if you ever think of this again.' Thus, I decided not to think about this matter at all."

Divorced women in Palestinian society are viewed very cruelly. They are subjected to blame and badly treated. They are not given another chance. Some believe that they are women who are unbearable to live with. They are increasingly subjected to harassment, according to Amal Siyam, director of the Women's Affairs Center in the Gaza Strip.

The environment surrounding divorced women can play a crucial role in society’s view of women, according to Dina, 24, who spoke to Al-Monitor about her painful story after she obtained a divorce from her first husband. She said, "When I got divorced, my brothers started monitoring my every move, restricting my freedom and controlling my relationships with others. They were very suspicious about everything I did."

However, Dina did not give up hope. She tried to win her life back and start all over, seeking to introduce herself in a new way to society. She believed that the best way to do this was to find a job and help support her family so they would stop considering her a burden. She applied for a position in a nongovernmental organization and passed all the tests successfully. This is when the manager asked for her identification papers and refused to hire her because she was divorced, and might cause problems between employees and their wives.

Dina seemed more composed than Yasmine, as if she had become accustomed to her situation and preferred to live with it instead of sinking into a despondency that would label her an "insane person" in addition to “divorcee.”

"Even married women in my family fear that I might steal their husbands. They do not allow me to enter their houses and have gone as far as to tarnish my reputation," said Dina calmly.

Divorced women are more likely to have temporary or chronic mental illnesses due to the social treatment they have to deal with, said Walid Mesbah, a social and psychological expert.

"It is in the customs and traditions of Palestinian society to blame women for divorce, placing tremendous psychological pressure and stress on them, which would lead to many mental illnesses, including dissociative identity disorder and chronic stress," Mesbah told Al-Monitor.

Dina said she hasn’t stopped searching for a job until she found one as a personal secretary. However, she ran away after harassment by her employer.

Mesbah said that society has imposed very tough conditions on women, as it views marriage as a means to "protect their honor." It is not participation in an integrative life. Thus, divorce is seen as a scandal, with resulting nerve-wrecking constraints on the women.

He also said that restricting the movements of divorced women can result in very negative repercussions, such as turning to “taboo” relations to satisfy their needs and living under constant psychological, biological and social discomfort.

“As soon as women are divorced, their every move would be monitored by their families, who start to restrict their freedom and prevent them from completing their education. If they agree to that, it will be done under tight control,” Siyam noted.

"Moreover, divorced women have another problem to deal with. Although according to Sharia they are entitled to keep their children after divorce, their families usually do not allow it, as they would rather not spend money on the children of men who have become estranged to them," she added.

The director also said that divorced women are more likely to be sexually harassed and abused, especially at their workplace.

When asked about a law that provides protection and social security for divorced women, Siyam said, "Some official and civil parties have been demanding to launch more programs targeting these women in order to empower them economically and provide them with social and psychological support."

After three years of leading a miserable life as a divorcee, Dina got herself a 63-year-old husband. She said this is better than being labeled a divorcee in a society that does not allow her to live with dignity.