How one Palestinian minister is empowering women

Palestinian Minister of Women’s Affairs Haifa al-Agha speaks to Al-Monitor about her accomplishments in advocating for Palestinian women in society and her future endeavors to further empower women on social and political levels. 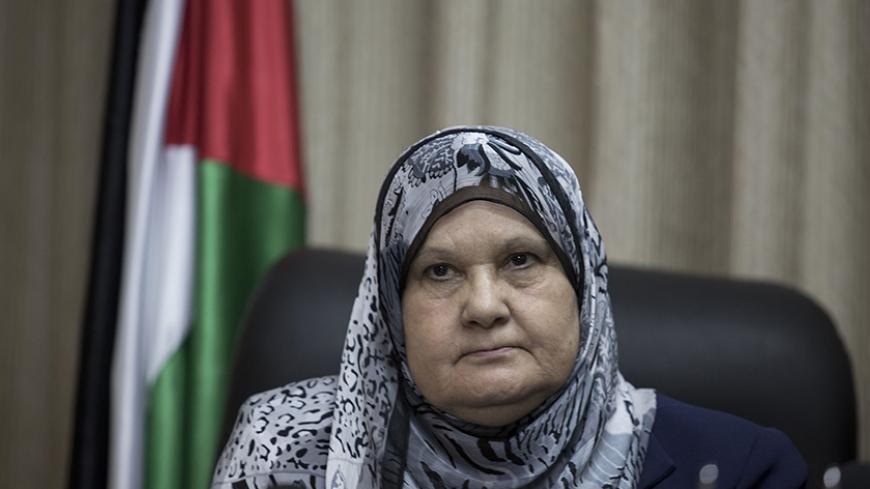 GAZA CITY, Gaza Strip — Since the Palestinian Nakba, Palestinian women have faced countless challenges and abuses, starting with being forced to seek asylum in other countries following Israel's occupation of Palestine in 1948, all the way to the current daily violations such as killings and arrests, perpetrated against them by Israel.

Haifa al-Agha, Palestinian minister of women's affairs, talks to Al-Monitor from her office at the ministry in Gaza City about the challenges women face in Palestinian society. She said the accumulation of violence against Palestinian women has made them tough as nails and an example for endurance and the ability to adapt in the face of adversity.

Agha, 65, was born in the city of Khan Yunis in the southern Gaza Strip and completed her secondary education at Haifa High School in her hometown in 1968. She obtained a bachelor's degree in public administration from the Higher Commercial Institute in the Egyptian capital of Cairo in 1972, a master's degree in guidance and educational counseling from Oklahoma State University in the United States in 1978, and a doctoral degree from that same university in 1991.

Agha opined that Palestinian women have faced many challenges that stand in the way of their continued attempts to showcase their presence and skills, commensurate with the level of sacrifice that they have made in Palestinian society by resisting Israel. Among those challenges is changing the stereotypical image that society has of women as mere housewives, competing with men in the political arena and fighting to bring about international protection for themselves from never-ending Israeli aggression.

In this context, Agha said that the Israeli aggressions against Palestinian women occur on all military, social and religious levels, and that during the Israeli war on Gaza in 2014, Israel killed 263 women. She added, "Palestinian women also suffer Israel’s cruelty at Israeli checkpoints erected at the cities’ entrances and roads in the West Bank. In December 2015, a woman who was on her way to the hospital was forced to deliver her baby at an Israeli military checkpoint in Hebron in the southern West Bank, after she was detained by Israeli forces at the checkpoint — that aims at impeding the citizens’ movement. In addition, Israel regularly issues decisions preventing a number of women from Jerusalem to enter Al-Aqsa Mosque.”

Al-Monitor:  What is the task of the Ministry of Women’s Affairs?

Agha:  The Ministry of Women’s Affairs has key responsibilities, both locally and internationally. Locally, it endeavors to change the stereotypical image that [Palestinian] society has of women, by allowing them to transcend their role as mere housewives, help them attain decision-making positions and assist them with the many challenges they face in society — such as honor killings, domestic violence and denial of inheritance rights — as well as empower them economically, socially and psychologically. These steps would thus allow them to face the repercussions of never-ending wars, during which they lost their homes, children and husbands, and of the ongoing siege imposed by Israel on Gaza, which forced them to work after their husbands lost their jobs.

Internationally, the task is to convey the suffering of Palestinian women to the international community, to guarantee them protection against the multitude of ongoing Israeli transgressions that affect them. For instance, politically motivated arrests such as the detention of member of the Popular Front for the Liberation of Palestine’s political bureau and deputy in the Palestinian Legislative Council [PLC] Khalida Jarrar on April 2, 2015. We also aim to protect women from being killed. During the latest war against Gaza [in the summer of 2014], 263 women were killed and 2,220 injured, of whom unfortunately a third will remain handicapped for life. In addition, over 790 women were widowed and became their families’ sole breadwinners as a result of their husbands being killed in the war.

Al-Monitor:  What inspired you to become a minister?

Agha:   I served as director general of public education in the Ministry of Education and Higher Education. I did not aspire to become a minister, but I was selected for the post when an agreement was reached to form a national consensus government subsequent to the April 2014 Beach Refugee Camp agreement between Fatah and Hamas. What encouraged me to accept it was the role that I would be allowed to play in empowering Palestinian women. Furthermore, this government did not represent the views of a specific political party, and as a nonpartisan myself, I accepted the appointment.

Al-Monitor:  How have the rights of women evolved since the establishment of the Palestinian Authority [PA] in 1993?

Agha:  The status of women has greatly improved and developed since the emergence of the PA in 1993. The cumulative efforts of the Ministry of Women's Affairs and private sector women’s organizations led to the betterment of the situation of women, especially in three different sectors: education, employment and political participation.

As for employment, 45% of public sector employees are women, which is a good percentage. But the unfortunate aspect of this statistic is that most of those employees hold low-level jobs, as only 12% of senior public sector positions — of general manager and above — are held by women. This is something that we are trying to change, and we aspire to see equal percentages of women and men in senior positions.

In addition, women are competing in businesses that have long been monopolized by men. In July 2015, two women were appointed as marriage registrars in Palestine, which was a positive development. But it is not enough and we aspire for much more.

Al-Monitor:  What is your position vis-a-vis the participation of women in the Palestinian political process? Do you believe that said participation must be developed, and how can more women be encouraged to participate?

Agha:  Palestinian women have yet to prove themselves when it comes to politics, though there are a few leading role models in this arena, such as Zuheira Kamal who holds the post of secretary-general of the Palestinian Democratic Union [FIDA] and Laila Ghannam who is governor of Ramallah and al-Bireh.

The quota of women in Palestinian legislative elections is 20% of the total number of candidates; our ambition is to see that percentage increase to 50%, as is the case for women in Tunisia.

To reach that level, we must change society’s negative views concerning politically active women, because the local community finds this undesirable and puts its trust in men more than women, who are viewed as mere housewives. We strive to transform this reality by changing society’s traditional stereotypical view of women.

On the other hand, we also strive to encourage higher female participation in political life, by providing them with the required support and developing their skills, knowledge base and awareness. This task can be achieved by expanding women’s opportunities, consolidating their participation in society and allowing them access to the experiences of other countries. But the Israeli siege on Gaza has prevented any rapid progress in that regard.

Al-Monitor:  Tell us about the most important initiatives that your ministry has worked on to advance women’s rights?

Agha:  When I assumed my responsibilities at the ministry in April 2014, I endeavored to improve the situation of women and protect them from transgressions. During that time, specifically in June 2015, the Council of Ministers ratified the national framework for the implementation of UN Resolution 1325 aimed at protecting women during armed conflicts. We are working on implementing said resolution on Palestinian territories and hold Israel responsible before international courts for its continued transgressions against Palestinian women.

We are also currently working on the ratification of the Family Protection Act, which aims to protect women and children from domestic violence. This act was submitted by three different ministries: the ministries of women’s affairs, justice and social affairs. It is now in the final stages of deliberations in the Council of Ministers.

Al-Monitor:  Since assuming the reins of the Ministry of Women’s Affairs, what is the accomplishment that you are most proud of?

Agha:  In addition to the achievements that I talked about earlier, I can say that I was honored to represent Palestinian women in many international, regional and local venues, the latest of which was my participation in the 7th session of the Committee on Women of the United Nations Economic and Social Commission for Western Asia [ESCWA], hosted by the Sultanate of Oman on Jan. 20, where Arab women’s issues were addressed. I am also currently preparing to go to the United Nations in the middle of March, where I will give Palestine’s keynote speech. In addition, I will discuss the Palestinian cause and the issues of Palestinian women, especially in the Gaza Strip, which has been enduring great hardships as a result of the ongoing Israeli siege. That, in my opinion, is one of my greatest accomplishments.

Another achievement is my contribution in informing other people about Palestinian women. In that regard, at the ESCWA [7th] session one of the participants asked me about the hardships that Palestinian women have to endure. I replied that Palestinian women inherited strength and endurance from their mothers, who inherited those traits from their grandmothers following the suffering that they were subjected to when they were forced to emigrate and seek asylum during the Palestinian Nakba of 1948, the war of 1967 and successive painful periods that followed — particularly the Israeli occupation of Palestinian territories in 1967, as well as the harsh living conditions that they endured, such as power cuts for 16 hours a day. This made it all that much harder to manage their households, but led to them becoming tough as nails.

Al-Monitor:  How has the political split between Fatah and Hamas [in 2007] affected Palestinian women?

Agha:  This issue is painful as much as it is shameful because the split has affected everything in Palestine. Its most painful and effective repercussion on Palestinian women was the continued paralysis of the PLC, which prevents us from adopting new pieces of legislation that advance the situation of Palestinian women and forces us to take improvised decisions in the absence of applicable legislation.