Several Palestinian media outlets from the West Bank and Gaza Strip signed a charter, drafted by the Ministry of Women's Affairs, to cover more issues about women and raise awareness about their rights. 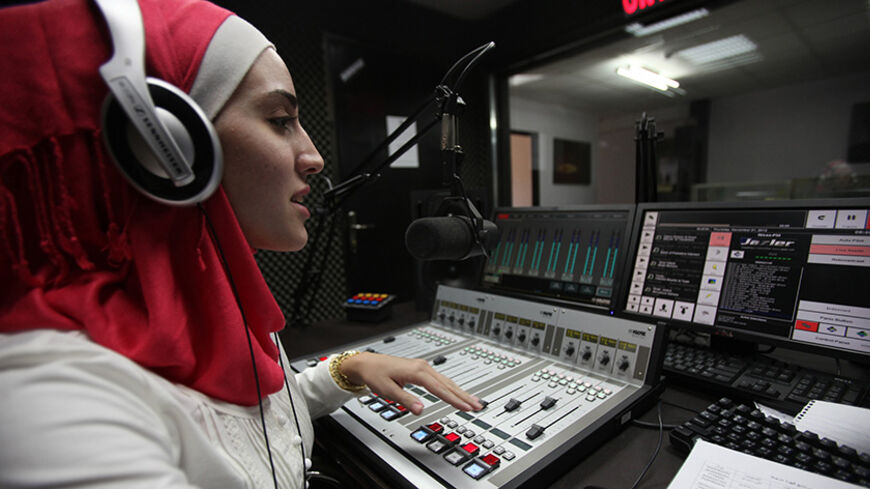 GAZA CITY, Gaza Strip — The Palestinian Ministry of Women’s Affairs, in collaboration with local media, is deploying major efforts to encourage the media to address social affairs, and women’s affairs in particular, in an attempt to change stereotypes and how society views Palestinian women.

On Dec. 5, 2016, 17 public and private Palestinian media organizations in Ramallah signed a charter of honor prepared by the Ministry of Women’s Affairs, to launch a safe media network that supports social issues and women’s affairs.

On Feb. 8, the ministry held a meeting in Gaza with local media outlets that had joined the network to discuss ways to develop mechanisms for the implementation of this charter. Media outlets that signed the charter include Palestine TV, Wafa News Agency, Maan News Network, Ajyal radio station, Watan TV, Al-Quds newspaper and Al-Raya radio station.

Minister of Women’s Affairs Haifa Agha, told Al-Monitor that in two separate meetings 17 media outlets in the West Bank and nine others in the Gaza Strip signed the charter of honor to work together using the same approach to change stereotypes about women, support their rights and address women’s affairs such as violence against them, denial of their inheritance, the right to choose a spouse and gender equality.

Regarding the implementation of the charter, Agha explained that starting March 2017, the ministry will specify a women's issue for media outlets to address uniformly and simultaneously during an agreed-upon period of time. The Ministry of Women’s Affairs and the Ministry of Information will later coordinate to put forward more issues related to women.

Agha said, “The charter stipulates several items, most notably the media’s commitment to collectively address women’s affairs and in coordination with the Ministry of Women’s Affairs to raise the issue of public opinion and achieve change. In addition, media outlets shall adopt a new work strategy to dedicate a larger number of media programs and articles to women by reporting about women and reporting in collaboration with women.”

She added, “Women in Palestine are better than men in several fields, most importantly in education; there are only 100 male graduates for every 145 female graduates. Despite these figures, society does not give women the chance to occupy leading positions in society — only 12% of positions higher than the position of general manager are occupied by women.”

Agha explained that the ministry prepared this charter in an attempt to push local media into assuming a greater responsibility and improving the quality of content by supporting women’s rights and promoting a culture to fight violence against women.

Raed Othman, a general manager at Maan network — Maan TV and Maan News — said that his network was excited to sign the charter in order to adopt a unified vision with other media outlets to address women's issues.

Othman told Al-Monitor, “After signing the charter of honor, Maan network decided to establish a gender control over the content published in articles and programs, in addition to organizing courses for our journalists on the coverage of women’s affairs.”

He stressed that Maan network has always been interested in women’s affairs, noting, “Supporting women’s affairs is one of our main concerns. We have a daily morning show hosted by five women from the West Bank and Gaza, during which they discuss various issues related to women. We also have two TV programs for women — 'Palestinian Women,' which features female role models and women’s achievements in society, and 'Who Has the Right,' which highlights women’s rights. We also have a special column for women’s affairs on our website.”

Othman explained that Maan’s management meets once every three months to set a new plan to address women’s affairs and raise awareness about women’s rights in society. Currently, the network is working on launching a media campaign by March 8, which marks International Women’s Day, to address several issues related to women such as violence against women, denial of their inheritance and gender equality.

Shady Zamarah, the program director at Al-Raya, said that his radio station is committed to the charter’s call for addressing women and gender affairs.

He told Al-Monitor, “We started implementing [the charter] by issuing a circular to all newsrooms to start giving women priority in covering news and preparing programs. In addition, we started relying more on female figures as a source of information and to highlight their presence in our society.”

Amal Siyam, the director of the Women’s Affairs Center in Gaza, believes local media does not assume enough responsibility in changing stereotypes about women. She told Al-Monitor, “Although media outlets cover women’s affairs, they are not a priority and they are not given the attention they deserve. This does not allow women to properly be in the spotlight.”

Siyam added, “The media only pays attention to women on special occasions such as Women’s International Day on March 8 each year,” expressing concern about the ministry’s charter of honor being occasional as well.

She called on media outlets to address women’s affairs on a regular basis and constantly shed light on the achievements of female pioneers and those who support their families, to show that women are productive members of society.

It seems that the charter of honor drafted by the Ministry of Women’s Affairs to support women is merely a moral and ethical commitment since it does not carry any punitive measures against media outlets that have signed it but refuse to abide by its terms. This may mean that the sudden interest in supporting women’s affairs may be a passing stage.