With a series of special programming, Radio Souriat has focused its listeners on UN Resolution 1325, which advocates for empowering women. 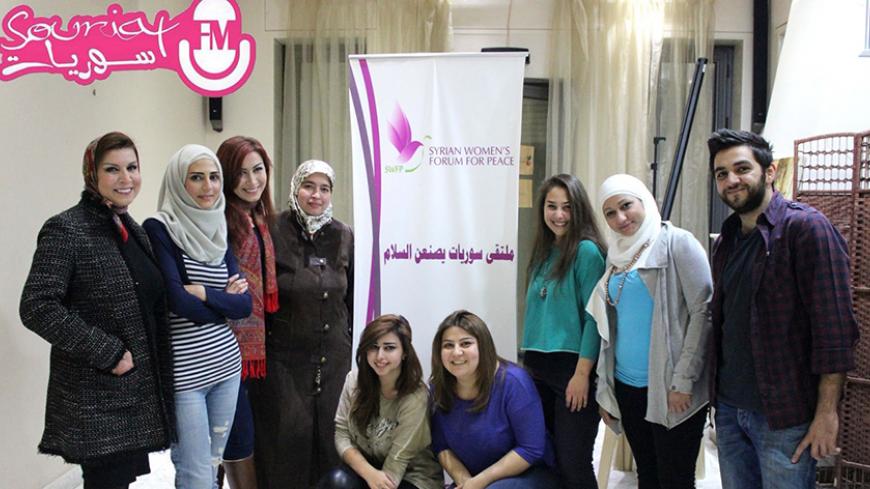 The team of Radio Souriat is seen with station director Amira Malek kneeling (in blue blouse) in the middle of the announcers of the daily programs. - Radio Souriat
Mustafa al-Haj
April 7, 2015

DAMASCUS, Syria — “Prevention, protection, participation” are the three basic concepts behind the “Our Right, Which We Must Demand” promotional campaign Radio Souriat started Feb. 22 to raise awareness about UN Resolution 1325 and to demand the implementation of its provisions as one of the important tools for gender equality during and after wars.

This campaign, the first of its kind in Syria, is especially important considering the political and military circumstances in the country. Campaign organizers thought that now was the best time to implement the provisions of the resolution, which was endorsed by Syria but never implemented following its adoption by the UN Security Council. According to one of the most important provisions, the peacekeeping forces, the police and the judicial authority should guarantee women’s protection. The forces should also commit to women’s and girls’ rights.

Visually, the campaign relied on simple “visual designs” in which the terms “prevention,” “protection” and “participation” formed the general framework, bolstered by symbols. Besides weekly radio shows, promotional voice recordings were aired on the radio station’s social networking pages and during daily broadcasts. 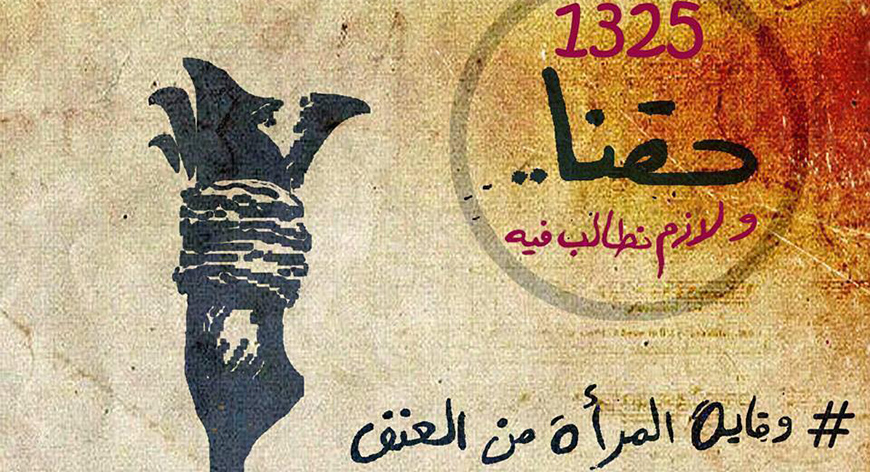 A poster advertises the first week of the campaign, focused on the theme of "prevention." (Photo by: Radio Souriat)

Amira Malek, the radio station’s director, told Al-Monitor: “The idea arose from the need to empower women, make them aware of their rights, and promote the concepts behind Resolution 1325, in light of the ongoing conflict in Syria, whereby those concepts emphasized the special status of women, and the need to include them in peacekeeping and peace-building operations while remaining sensitive to peacekeeping forces, police and judicial authorities about the specificity of women in the conflict, the need to take measures to guarantee their protection and undertake to preserve the rights of women and girls. The campaign also served as a means to pressure the government into adopting a national plan for the proper implementation of the resolution.”

The campaign focused in its first week on defining the concept of protecting women from violence and preventing physical, sexual and verbal violence against women and girls, as well as the violence that women endure during war. The second week, at the end of March, addressed the concept of protection, while the third and final week at the end of April will focus on women’s participation and representation in the communities witnessing armed conflicts. Their voices should be heard in conflict settlement so that they can be part of the decision making at all levels, as equals, to avoid and resolve conflicts.

The station primarily relied on adapting radio programming, and programs were streamed online as well as broadcast through the station’s Facebook page and its SoundCloud channel. In addition, a Facebook page was specifically created to promote the campaign, garnering about 300 visitors so far, while the radio station and its partners’ webpages started the hashtag "#our right, which we must demand."

“The campaign has been well accepted and popular on local media. Many women have begun contacting us in order to better understand those three concepts and to participate in promoting the campaign," Malek told Al-Monitor. "The campaign’s impact is also evident through the increasing number of civil society organizations’ comments and participation of those concerned on our webpages.

“Our campaign is not a mere promotional one, but includes concrete activities and events designed to enhance the participation of women with different backgrounds and levels of experience. It also comes at an opportune moment to raise social awareness about the role of women in achieving peace, and the ways by which women can be protected and shielded during times of armed conflict.”

With its partners, the radio station organized activities such as a seminar March 8 to discuss Resolution 1325, and a panel discussion in Aleppo. As part of International Women’s Day, the radio station hosted a group of female physicians and specialists who participated in an event titled “Your Health is Part of Your Protection,” with the aim of encouraging women to take better care of their health and answer their medical questions. Furthermore, a number of articles were published in Al Tafkir Li Souriya monthly magazine to provide education about the resolution’s provisions, while a series of films dealing with women’s issues was shown at the Binaa Culture Forum.

Concerning future activities, the radio station’s director told Al-Monitor that a panel discussion will be held in As-Suwayda next week, in collaboration with Jozoor Suwayda (Suwayda Roots) organization. Malek added: “During the final month of the campaign, a visual arts exhibition will be held, with the participation of a large number of Syrian female visual artists. It will be organized in collaboration with Binaa Culture Forum, which holds similar periodic events in the capital, Damascus.”

The initiative is an independent one established through the efforts of the Syrian Women’s Forum for Peace in December.

Malek said the radio station, the first community station that specializes in Syrian women’s affairs, was not promoting or advertising the activities of the Syrian Women’s Forum for Peace, established in 2012. The forum aims at establishing an international and Syrian public opinion to pressure decision-makers into adopting peaceful means in political life and building a democratic state. The forum also seeks to empower the Syrian women’s role in achieving peace and building democracy, as well as participating in public and social life.

Instead, she viewed the station as “a platform showcasing women’s issues, and a project of the forum’s plan for change through art.”

The project sponsored various activities and initiatives, such as the “Walls for Peace.” The station’s efforts occur parallel to those of the forum in a manner that focuses more on Syrian women, particularly since most other Syrian media outlets “deal with women’s issues as marginal inconsequential matters,” which are not the basis for social problems as a whole.

Malek said the radio station relies on volunteers and strives to receive the governmental licensing to facilitate its work and the movement of its employees inside Syria, as well as allowing it to reach the largest possible number of women in the country.