There is a dearth of women-focused media outlets in Gaza, where some female journalists are organizing their own platforms to promote women's issues and increase their presence in the sector. 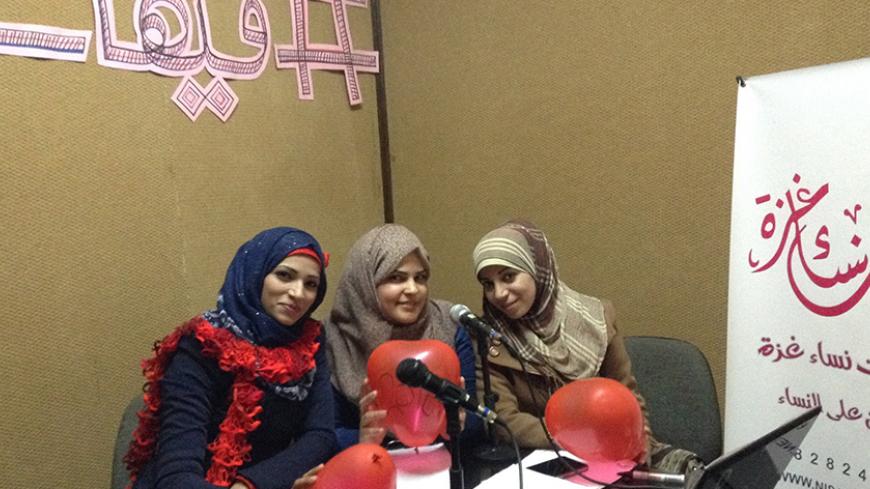 GAZA CITY, Gaza Strip — In male-dominated Palestinian society, female journalists in the Gaza Strip have been striving to get ahead. By improving the image of women in the various media outlets and increasing local coverage of women's issues, they hope to make society recognize that women are essential partners to men, strengthen the role of women's organizations and develop the role of female Palestinian journalists.

In the large media sector of the Gaza Strip, which is a hotbed of events that constantly attract the world’s attention, there are only five women-focused media outlets trying to find their niche. Muna Khader, the coordinator of the Palestinian Female Journalists Club in Gaza, listed the five outlets: Gaza Women Radio; Al Ghaida Magazine issued by the Women’s Affairs Center; Al Saada Magazine published by the Thoraya Communication and Information Foundation; Nawa News Network; and the Khnsaa Palestine website by the Islamic Jihad’s women’s department.

Khader told Al-Monitor, “The state of women in media in Gaza, in particular, and in Palestine, in general, is not up to the level of the sacrifices that women make. … The few media organizations for women in Gaza are affiliated with civil institutions, not the government. Therefore, the government should adopt women’s issues and promote women’s media organizations in Gaza.”

Khader explained that women’s media organizations in Gaza are trying to promote issues that are neglected by other local media outlets. She said, “Looking at the front pages of popular Palestinian dailies (Al-Quds, Al-Ayyam, al-Hayat al-Jadida and [Hamas-affiliated] Felesteen), we rarely see woman-specific headlines. [Women's] issues are discussed in the inside pages, not the front page.”

Journalist Islam al-Barbar founded Gaza Women Radio in 2013 as the first community-based electronic media outlet that caters to women in Gaza. But the project's facilities were shelled by the Israelis during the 2014 war. She was able to resume the disrupted broadcast in November.

Barbar told Al-Monitor, “I wanted to take a step forward for women-specific Palestinian media and talk in depth about all issues faced by Palestinian women, who are being harmed by the ongoing Israeli violations and societal marginalization. I want to showcase their successes and achievements at a time when local media portrays [Palestinian women] as always complaining and weeping. … Local radio stations mostly talk from a man’s perspective and are headed by men. So we had the idea of creating a radio station headed by a woman. And this broke the rule.”

She noted that Gaza Women Radio received no support from anyone and was created entirely independently. Noting that she wanted to provide more work opportunities for women because there are few jobs for them in the local media institutions, she pointed out that the station's staff includes 14 journalists, 10 of whom are women.

Asked about the targeting of the radio station during the 2014 war on Gaza, Barbar said, “Our headquarters were directly targeted by Israeli aircraft. We lost our office and our few pieces of equipment. It was a major blow for us.”

She noted that the lack of outside funding and support was a problem when she tried to resume work. Then the Arabic-language Middle East Broadcasting Center came forward and helped her by providing a little financial support. But she stressed that there is no guarantee that the station’s work will continue because women’s projects have no local support.

For her part, the editorial secretary of Al Ghaida Magazine, Samar al-Dreamly, said that although they do publish four issues a year, her publication has not been able to achieve its goals of becoming a monthly magazine, expanding its reach and increasing its circulation, which now does not exceed 1,000 copies per issue.

She told Al-Monitor, “Al Ghaida Magazine was established in March 1997 and we have published 29 issues so far. We employ at least 30 journalists, mostly women, and the magazine is considered a free and courageous platform that explores women’s issues. Every published issue is a mirror reflecting Palestinian women’s hopes, pains and ambitions.”

She said that her magazine aims to discuss Palestinian women’s issues, change the prevailing stereotypes about them, improve women’s intellectual and vocational levels, and promote their self-confidence as independent individuals that deserve an effective role in all spheres of life. She also seeks to offer job opportunities to recent female journalism graduates and writers and promote them in society.

Khader believes that female Palestinian journalists are able to innovate and excel if given the opportunity. “Most local media organizations do not give women senior supervisory roles, even though some women can successfully perform that role, such as Palestinian journalist Samar Shahin, who was able to prove her skills and capabilities when she became the editorial secretary of the daily newspaper Felesteen,” she said.

There is a dearth of financial support from local and international organizations to strengthen the role of Palestinian women in the local media sector. Khader added that the biggest obstacle to the development of women’s media organizations in Gaza is the lack of programs for developing the skills of female Palestinian journalists. Most female journalists in Gaza also lack work experience, given the lack of opportunities.