Egyptian women speak out amid global focus on sexual harassment

While social media campaigns are giving voice to many hitherto voiceless women in Egypt, much remains to be done about sexual harassment in the country. 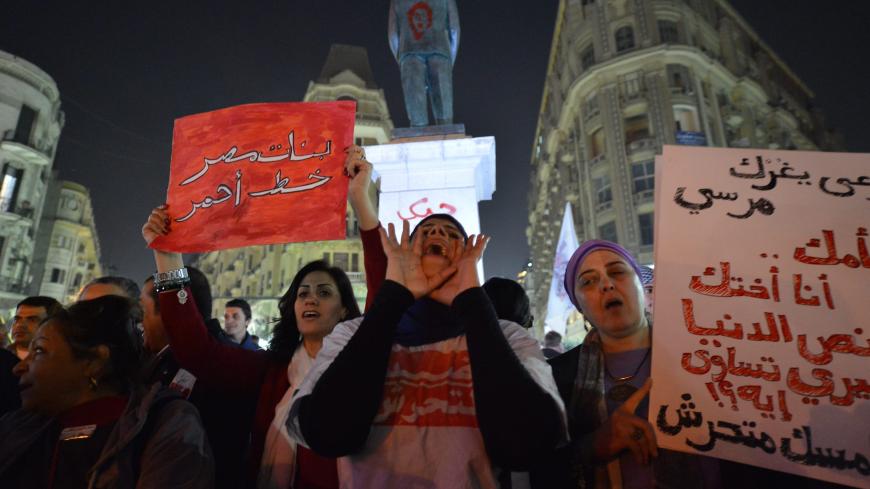 Egyptian protesters hold up placards and shout slogans during a demonstration in Cairo against sexual harassment on Feb. 12, 2013. - GETTY/Khaled Desouki

Two years ago, Somaya Tarek, known in the Egyptian media as “the mall girl,” was sexually harassed in a mall in the eastern Cairo suburb of Heliopolis. When she bravely chased down her harasser, he physically assaulted her before security guards came to her rescue. The scene was captured by mall security cameras and the man was arrested.

Tarek shared the details of the traumatic incident on a talk show on the privately owned Al Nahar TV channel. Much to her dismay, the female talk show host accused her of having “provoked harassment by wearing a sleeveless T-shirt.” Reham Saeed, the host in question, also showed private photos of Tarek in a bathing suit, allegedly obtained from the latter’s cellphone — without prior permission from Tarek — by the production team.

Saeed argued that “if a woman dressed provocatively, it is no surprise she would get harassed.”

Her words sparked outrage among women’s rights advocates and internet activists who launched a social media campaign calling for the suspension of the show. Bowing to pressure from the rights activists, Al Nahar’s management suspended Saeed’s show for several months and the harasser was sentenced to one month in prison and fined 100 Egyptian pounds (approximately $6).

The story, however, did not end there.

Earlier this month, exactly two years to the day Tarek was assaulted, the released attacker struck again. Seeking revenge, he waited for Tarek outside a cafe near her home and slashed her in the face with a sharp instrument (believed by Tarek to be penknife or a razor blade). He then ran off, leaving her bleeding on the pavement.

Sliced from her right cheek down to her lip, Tarek was rushed to the hospital.

“I needed 50 stitches to close the gaping wound on my face,” she later said in an interview broadcast on the privately owned Al-Masry Al-Youm news site. With the right side of her face badly swollen and her eye completely shut, Tarek warned women not to report harassment incidents “lest you suffer a similar fate.”

“I have fallen out with my family and lost many of my friends. Before reporting harassment, think what can happen to you. You may end up like me with a permanent scar on your face. If I could turn back the clock, I would not do it again,” she said.

Egyptian women have only recently broken their silence on sexual violence. Before the 2011 uprising that forced former president Hosni Mubarak to step down, few women had come forward to report sexual abuse and harassment incidents and sexual violence was rarely discussed in the media.

“Women were either afraid of being blamed for the assault or of bringing shame to their families, or both. So most survivors of sexual violence chose to remain silent,” Alia Soliman, communications officer at HarassMap, a volunteer-based Egyptian nongovernmental organization working to end sexual harassment, told Al-Monitor. The few survivors that shared their stories of harassment using the HarassMap online platform, launched in 2010, largely did so anonymously, she said.

However, that changed with the revolution.

“There’s been a major shift since 2011. With the fear barrier broken and with all the talk about freedom and social justice, women became more aware of their rights and are increasingly speaking out on the issue. The increased media coverage of sexual assault since the uprising has encouraged more women to open up. Many had previously believed that harassment meant groping or physical assault; now they know that they do not have to put up with verbal harassment either,” Soliman added.

Despite the progress made in the fight against sexual harassment, many survivors are still afraid of being blamed or ostracized if they report harassment, especially at the workplace, lamented Soliman.

About 99% of Egyptian women have experienced “some form of harassment” and “47% of divorced or separated women have reported domestic abuse,” according to a 2013 UN study. Harassment is so widespread in Egypt that some rights advocates have described it as “an epidemic.” A series of brutal mob sexual assaults at protest sites since the January 2011 uprising and immense pressure from civil society groups such as HarassMap and Tahrir Bodyguard prompted the issuance of a long-awaited law criminalizing sexual harassment and assault in July 2014. While the “landmark” legislation, lauded by UNFPA Egypt as “a major step toward achieving safety of Egyptian women and girls in public spaces,” has encouraged more women to report harassment incidents, it has yet to become an effective deterrent for offenders. “That is because many men are still unaware that they may face criminal punishment or because some still believe they can target women with near impunity,” said Soliman.

In mid-October, a poll by the Thomson Reuters Foundation ranked Cairo as the “most dangerous megacity for women,” sparking wide controversy in Egypt. The survey, which covered 19 “rising cities with over 10 million people,” was based on interviews with 20 experts and responses from 380 online pollsters. It focused on how well women are protected from sexual violence and from harmful cultural practices and whether they had access to finance, health care and education. According to women’s rights experts, the treatment of women in the Egyptian capital has worsened since the 2011 uprising. Women’s rights have been put on the back burner while the government prioritized the faltering economy over other issues, they lamented. Officials from the National Council for Women (NCW) — the government body solely responsible for addressing the issues and concerns of Egyptian women — argued, however, that women’s rights had improved in recent years with President Abdel Fattah al-Sisi declaring 2017 as “the year of the Egyptian woman.” Sanaa El Sherif, a prominent member of the NCW, insisted that “women are being politically and economically empowered” and had reached senior positions in all fields. “We have a female governor, a number of women deputies and female generals in the army. Who can say that Egyptian women have not attained their rights?” she asked in an interview broadcast on BBC Arabic.

In an official statement released Oct. 18 by the NCW, the state body criticized the survey’s outcome as “unacceptable” and “baseless,” adding that the outcome contradicts the results of other “serious well-researched studies” whose findings are based on “credible” statistical indicators and that were conducted using internationally recognized research methods of proven reliability. “While we are fully aware of the challenges faced by Egyptian women, the state is working to overcome them through a carefully planned strategy to empower women by 2030,” the statement said, citing “women-friendly legislation, increased awareness of women’s rights and changes in the mindset and attitudes of men vis a vis women’s issues,” among the positive achievements made in recent years.

The release of the survey coincided with the #MeToo social media campaign urging women worldwide to tell their stories of sexual abuse and harassment with the aim of showing the magnitude of the problem. As the campaign quickly went viral, scores of Egyptian women defied social norms by joining counterparts from around the world, publicly sharing their sexual abuse experiences on Facebook and Twitter. Hours after the campaign had been launched, activist Gigi Ibrahim tweeted: “#metoo just like every woman in this country #Egypt.”

While social media campaigns such as #MeToo and the HarassMap online platform are giving voice to many hitherto voiceless Egyptian women and are, according to the analysts, “democratizing feminism,” much remains to be done in Egypt. “All members of society — men and women — must shoulder their responsibilities. Eyewitnesses rarely come forward to give their testimonies. The media must stop blaming the victims and portraying them as ‘malicious women.’ Enforcing the laws that protect women and acknowledging the scale of sexual violence in the country would also be steps in the right direction,” Iman Bibars, the chairperson of the Association for the Development and Enhancement of Women, told Al-Monitor.