Civil organizations are encouraging Egyptian women — and men — to speak out against sexual harassment, and want the nation to start enforcing its laws against the crime. 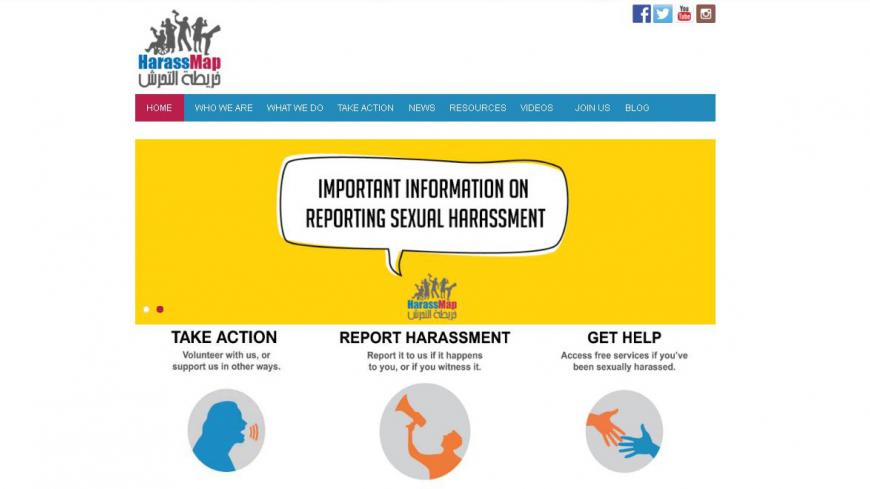 This screenshot of a HarassMap webpage shows how the organization, formed in 2010, is trying to end the acceptability of sexual harassment in Egypt. -

In a horrific incident in 2013, a microbus driver harassed a girl, then ran her over multiple times when she refused to move until her family arrived to deal with him, killing her. Nobody stopped him, and he got off for being a juvenile.

Earlier this month, the Egyptian parliament approved tougher penalties for sexual harassment, doubling the minimum imprisonment sentence to a year instead of six months, and increasing the fine to a minimum of 5,000 Egyptian pounds ($267) and a maximum of 10,000 pounds instead of 3,000 to 5,000 pounds. In cases of recidivism, the punishment is doubled.

Upon Cabinet approval, the bill would amend Article 306 of the Criminal Code.

Yet despite the presence of such provisions, 99.3% of women in Egypt are reported to have been sexually harassed. Civil society has stepped in, encouraging women to speak up and urging men to take a stance.

“Even if we have the most progressive law and the most progressive policy in the world and people do not think of sexual harassment as a crime, then we are not really doing anything,” said Alia Soliman, the communications manager at HarassMap, a volunteer-based organization with a mission to end the social acceptability of sexual harassment in Egypt. “Until this day, the survivor is blamed, and the harasser is given many excuses,” Soliman said.

Established in 2010, the organization maps sexual harassment and provides a platform for survivors to freely and anonymously report sexual violence. It is also a tool to identify harassment trends, and to know which areas need more working on.

Different teams tackle the epidemic through various lines of work.

One of the projects is the "Safe Corporates" program, which tailors sexual harassment policies for private companies and trains employees about the types of harassment and how to report an incident.

“People don't consider verbal sexual harassment as an act of sexual harassment. It is considered a minor thing by many people. It is actually not, and according to the law it is a crime,” Soliman said.

HarassMap is also present on university campuses all around Egypt, conducting workshops and raising awareness among students. At Cairo and Bani-Suef Universities there is a unit to report on-campus harassment. There is a plan to spread such units to more universities, Soliman said.

An “on the street” team in different governorates goes around talking to people about speaking up against this problem, intervening and reporting to the police instead of being passive about it.

But police themselves are part of the problem in Egypt.

In June 2014, interim President Adly Mansour enacted a law against sexual harassment after civil society lobbied intensely for it. Yet the law is flawed, and places burdens on the woman, said Hala Mostafa, one of the three founders of the I Saw Harassment initiative.

The law dictated that a survivor needs to capture the criminal, take two witnesses and head to the police station. But experts say that 90% of the time, police threaten the woman, belittle what she is going through or try to convince her to abstain from filing a legal case. Even if the survivor is able to get through all of this, a bribe as small as 20 pounds — a little more than a dollar — could give the harasser access to her contacts and address. She and her family are then subjected to threats, blackmail and scandal to drop charges.

“The number of cases filed do not constitute even 0.1% of the amount of harassment actually taking place in Egypt,” Mostafa said.

Mostafa cites political, social and religious reasons for the epidemic.

Consecutive regimes in Egypt used sexual harassment and rape to punish their opposition, be it men or women, she said. Security forces do not shy away from harassment, whether acting on their own or on orders, experts said. There are documented accounts of girls raped inside security vehicles.

Meanwhile, there is a religious discourse that through the extreme objectification of women regards the mere act of a woman's leaving her house as a proof of the woman's lack of virtue, therefore making her in their minds a legitimate target for inappropriate sexual approaches and harassment. As a result of incorrect upbringing, some girls blame harassment on themselves.

I Saw Harassment was launched in October 2012, during the reign of Muslim Brotherhood President Mohammed Morsi, “when the tone against women was high,” Mostafa said. The volunteers saved many women during protests, sit-ins and demonstrations, as well as public crowded places, especially during national and religious holidays.

Most recently, another initiative was launched early 2016, specifically targeting men who are passive toward sexual harassment, dubbed Malaksh Feha (Mind Your Own Business). The idea is to get men to read sexual harassment testimonials in front of the camera for the first time to record their reaction to these stories, said Allaa Emad, who is behind the campaign. It consists of a series of movies, each with a different story and character. Emad managed to collect 73 stories from women all over Egypt and of different age groups through her online campaign. One story tells how a Quran teacher, supposedly among the most religious people, harasses women.

Asked whether the campaign is working, Emad replied, “Yes. Some men have actually sent me stories of their intervening.”

Targeting a younger generation, Not Guilty reaches out to school children. The 5-year-old organization educates and informs them about what they should do if they are ever inappropriately touched in group sessions, getting the idea through using puppets, songs, coloring books, cards about feelings and skits. Not Guilty also trains the trainers, and spreads awareness among parents and grandparents for better upbringing.

“Egypt does not lack laws, nor does it need harsher punishments. Egypt lacks political and social will [for change],” Mostafa said.

Nevertheless, the 2014 law, for the first time in the history of Egyptian legislation, used the more general term “harassment” in place of “rape.” More women are standing up for themselves, filing complaints and using social media in their favor. The media now discusses sexual harassment, which was previously taboo, playing a role in combating it.