In their latest demonstration against sexual harassment, Egyptian women in 1960s-style dresses took to the streets of downtown Cairo for a photo shoot in celebration of how tolerant Egyptian society once was — and could be again. 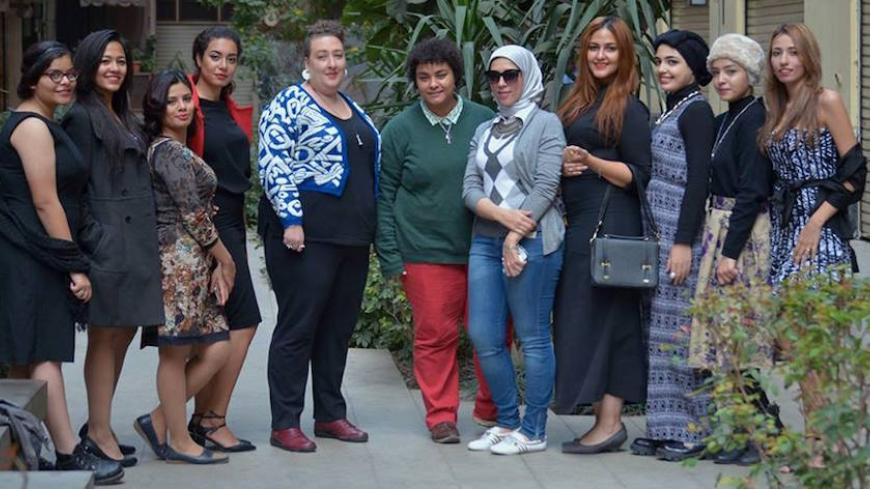 Participants of the "Dresses of the Past When Our Streets Were Safe" initiative posing at a cafe in downtown Cairo, Dec. 8, 2016. - Robabkia Photography

A new Egyptian initiative is calling upon women to wear 1960s-style dresses as a way to fight sexual harassment. The initiative, dubbed “Dresses of the Past When Our Streets Were Safe,” seeks to normalize the sight of women on the streets wearing dresses as it was in the 1960s, when sexual harassment rates were at their lowest.

Hadia Abdel-Fattah, the feminist activist behind the initiative, told Al-Monitor, “It is not about clothing, because no matter what you wear you will get harassed anyway. That is why we encourage women to wear whatever they like.”

The initiative comes as part of UN Women's 16 Days of Activism against Gender-Based Violence, an international campaign taking place from Nov. 25 to Dec. 10. The campaign is an annual event in which individuals and organizations around the world call for an end to violence against women and girls.

Abdel-Fattah said that she and another activist organized an event on Dec. 8 in which a group of women took to the streets wearing dresses and were pictured in downtown Cairo by photographer Gehad Saad. She added that the photo shoot was offered free of charge to participants as part of the initiative, which aims to end the social acceptance of sexual harassment.

Abdel-Fattah launched the initiative through her Facebook page “We Will Not Keep Silent about Sexual Harassment.” The page, established last June, seeks to reduce sexual harassment by organizing awareness campaigns and activities.

Abdel-Fattah wrote on the page, “Who of us has not dreamed of wearing a 1960s dress on the streets and walking freely without being harassed? Who of us has not wished to live in the 1960s and dress like women at the time without being criticized about her clothes?” Wearing dresses was normal in Egypt during late President Gamal Abdel Nasser’s era in the 1960s, before the radical Islamic expansion of the 1970s and the emergence of Gamaa Islamiya in 1979.

Abdel-Fattah said she wants to send the message to society that clothing is not the cause of sexual harassment, because there were times when women wore dresses and did not get sexually or verbally harassed.

In 2008, the Egyptian Center for Women’s Rights reported that wearing a veil did not appear to lower a woman’s chances of being harassed. According to a 2013 report by the United Nations Entity for Gender Equality and the Empowerment of Women, 99.3% of Egyptian women have experienced some form of sexual harassment.

Saad, the photographer who has conducted several other photography projects addressing violence against women, said that the causes of sexual harassment are rooted in systemic gender inequity, not a woman’s behavior or clothing choices. “Women think that when they wear hijab or niqab that will keep them safer on the streets. But that is not true because women wearing headscarves and full-face veils also get sexually and verbally harassed,” he told Al-Monitor.

However, Saad added that he is not calling upon women to take off their hijabs or niqabs. “On the contrary, I am just telling them to wear whatever they like, whether it is a dress, a miniskirt, a hijab or a niqab. I am telling them to feel free in their clothing choices because wearing conservative clothes does not really help,” he said. In the photos from Dec. 8, there were two women wearing hijab.

Abdel-Fattah’s action is not the first of its kind in Egypt. It was preceded by other initiatives that have encouraged many women to wear dresses in defiance of the sexual harassment they experience on the streets. The initiatives include “Lebet el-Set,” which featured an atelier selling clothes reminiscent of those of the 1960s, as well as one dubbed “Put on Your Dress and Take Back Your Femininity,” initiated by Egyptian writer and pharmacist Dina Anwar last year.

Saad said that interest in the initiative was very high, with about 2,000 women applying to participate in his photo shoot. “Many women have become courageous and have started to understand that they have the right to wear whatever they like without fear. Harassers are the ones who should be afraid,” he added.

Randa Fakhr el-Deen, executive director of the NGOs' Union against Harmful Practices on Women and Children, said that it is not clothing that deters a harasser, but the law and women’s attitudes toward sexual harassment. “Women should insist on taking legal action against the harassers, and the law should be used to hold violators accountable,” she told Al-Monitor.

A few days after the law was issued, a video emerged showing the horrific assault of a woman during celebrations of the inauguration of President Abdel Fattah al-Sisi on June 8 in Tahrir Square. The video showed a partially exposed woman, her legs bloody and bruised. She was then stripped totally naked and surrounded by a group of men trying to grope her from all sides while the police were trying to rescue her.

Sisi visited the woman in the hospital, giving her flowers, apologizing and vowing to crack down on sexual harassment. In the following month, seven men were sentenced to life and two men to 20 years in prison for assaults around Tahrir Square.