For the first time, Al-Azhar’s newspaper published the photos of unveiled women on the front page of an edition devoted to women's issues. 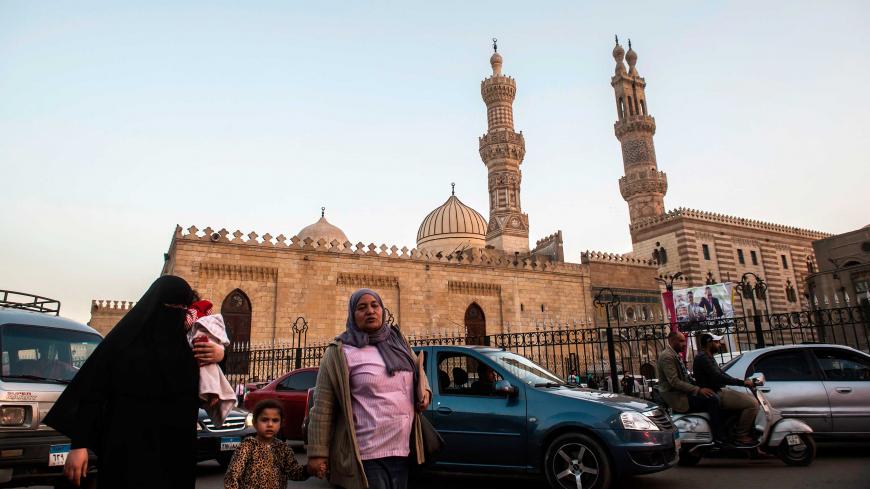 CAIRO — The Sept. 5 front page of Sawt al-Azhar, the official newspaper of Egypt's Al-Azhar Al-Sharif, featured several women, some of them unveiled, discussing sexual harassment. The unprecedented publication was a shock to both religious and social circles but was widely welcomed by human rights and women's rights activists.

“This is amazing. I did not expect them to publish my photo. I was asked to give comments on Al-Azhar’s role vis-à-vis women and recommendations to this effect. All my comments were unedited and published in the article. I am really astonished,” Azza Soliman, head of the Centre for Egyptian Women Legal Assistance, told Al-Monitor.

Ahmed al-Sawi, Sawt al-Azhar’s editor-in-chief, told Al-Monitor that it was not the first time that the newspaper has published the photos of and writing by unveiled women writers.

Sawi told Al-Monitor that the newspaper’s front page is a statement against harassment.

On Aug. 28, Al-Azhar issued a statement in response to the controversy that was sparked in Egypt when a woman was verbally harassed in a posh Cairo neighborhood on Aug. 16. The young woman, Mona Gebran, posted a video of a young man trying to harass her on Facebook. The video went viral and some commentators said that she was harassed because of her inappropriate clothing.

The statement read, “Harassment is a forbidden and deviant behavior, as it encroaches on the privacy, freedom and dignity of women. Justifying harassment with the women's clothing shows a misinterpreted understanding of the issue.” Al-Azhar also called for laws criminalizing and punishing harassment.

Al-Azhar has changed its stance on harassment since four years ago, when a PhD student at Al-Azhar University was harassed by her thesis adviser, and ended up being punished when she complained.

The results of a 2016 survey conducted by the Central Agency for Public Mobilization and Statistics showed that 49% of women living in slums were subjected to harassment, and 36% of young women aged between 15 and 17 have been sexually harassed.

Sawi noted that the newspaper’s role is to be a bridge between the community and Al-Azhar and be more engaged in dialogues and discussions on public issues, offering its religious opinions on social issues and addressing major social issues such as a child marriage and equality between Egyptian citizens of different religions.

“I am a journalist and thus I am viewed as belonging to the democratic civil movement. Yet I was chosen by Al-Azhar a year and a half ago to be the editor-in-chief of its newspaper. I discovered that Al-Azhar is introducing moderate Islam — a fact that the media fails to highlight,” Sawi told Al-Monitor.

Ilham Shahin, a professor of philosophy at Al-Azhar University, was surprised by the reactions to the newspaper. “It is not strange for Al-Azhar to discuss and to publish a diversity of opinions,” she told Al-Monitor.

For her part, Soliman explained that over the past three years Al-Azhar has been responsive to the calls of civil society organizations for dialogues on women’s issues such as the practice of verbal divorce, or "talaq," and proof of paternity. However, she noted that the men of Al-Azhar often do not share the women's opinion on how to resolve these issues.

“Al-Azhar says it offers a balanced religious discourse, but I do not see it. Al-Azhar continues to uphold talaq and to differentiate between men and women in inheritance, which is biased against women, in my opinion,” she said.

She added, “Al-Azhar has started to react positively to harassment, which is a very troubling issue to women. I believe the institution should continue to be involved in women’s affairs and open a door for dialogue with more women’s associations and civil society organizations. Al-Azhar ought to also offer a religious discourse that promotes women’s values and does not undermine their dignity.”

A few days following its statement on harassment, Al-Azhar's Grand Imam Ahmed al-Tayeb instituted lectures on the topic for men, in a bid to reduce the high rates of divorce, especially among newlyweds.

Egyptian parliamentarian Margaret Azer told Al-Youm Al-Sabaa that granting Egyptian women of different walks of life, be they Muslim or Christian, veiled or unveiled, a chance to express their opinion and publish their photo on its newspaper’s front page is a major step and a strong response to hard-liners.

Al-Azhar has been repeatedly accused of taking extremist stances, such as failing to classify the supporters of the Islamic State as non-believers. Most recently, Al-Azhar's Council of Senior Scholars headed by Tayeb rejected a proposal by Egyptian President Abdel-Fattah al-Sisi to annul talaq, stirring tension between the two leaders. On more than one occasion, Sisi has called on Al-Azhar to reform its religious discourse.

“Al-Azhar has renewed itself as an Islamic institution that avoids extremism and partiality,” Shahin asserted. “Its positions stem from scientific studies and are not based on personal or societal reactions.”

Sawi concurred with Shahin and stated that Al-Azhar has always been keen on fulfilling its duties toward women. “Last year it established the Faculty of Physical Education for girls, the first in its history. It also opened up to the arts by allowing Al-Azhar University to organize an art festival in May. The university formed a mixed student choir — an unprecedented step. This proves Al-Azhar is serious about reinventing itself and its curricula.”

Said Sadek, a professor of political sociology at the American University in Cairo, believes Al-Azhar's religious discourse is being slow to evolve because of most of its leaders' conservative mentality. He pointed out that the patriarchal culture, customs and conservative traditions prevalent in Egyptian society have heavily influenced Al-Azhar's stances. “This was particularly reflected in Al-Azhar’s insistence on upholding talaq, although many Muslim countries have abolished it.”

In an article published in March 2017, Tayeb wrote, “The deep-rooted ancient traditions and customs in Eastern societies have caused injustice and marginalization for women. This led to the emergence of several problems, such as spinsterhood and deprivation of inheritance.”

Sadek concluded, “Al-Azhar has been facing political pressure by the current regime over the last four years to push it to take serious steps to renewing its religious discourse. The institution has been resilient, but now, Al-Azhar seems to be starting to cave.”