A number of activists and initiatives are working to combat widespread sexual harassment in Egypt. 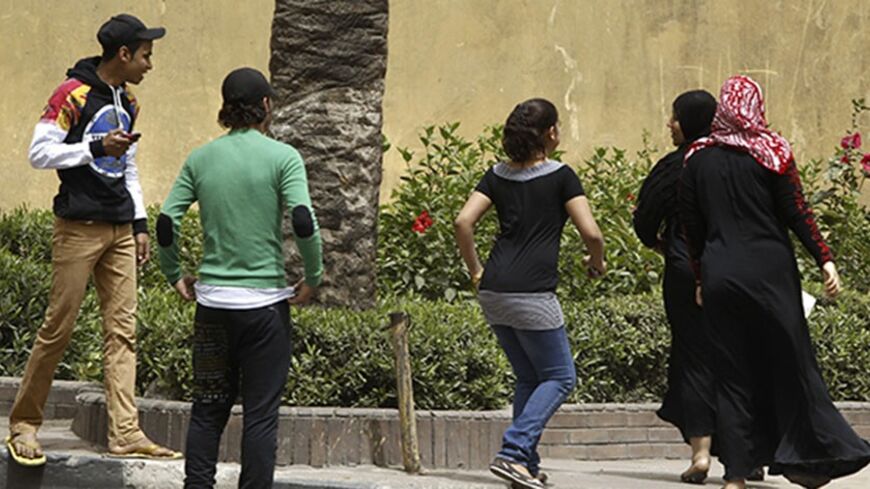 Sexual harassment in Egypt is a dangerous phenomenon. It surfaced in Egyptian society several years ago, and has increased to the point that all girls have become victims of it while outside their homes.

At the end of 2013, UN Women, in cooperation with the Cairo Demographic Center, issued a study about sexual harassment targeting women in Egypt. The study clarified that 99.3% of women surveyed had been subjected to one form of harassment or another — 86.8% of them faced verbal offenses, while 94.1% were subjected to dirty looks directed at their bodies. Moreover, 79.2% suffered from telephone stalking and 95.9% were subjected to obscene language. Thus, as part of the “Safe Cities” project, UN Women in Egypt issued a public service announcement titled “Put yourself in her shoes, instead of finding ways to blame her,” to combat violence against women and highlight the extent of fear they feel in the streets.

The HarassMap initiative, which was founded in 2010 to track and map reported incidents of harassment in Egypt, defines sexual harassment as “any form of unwelcome words and/or actions of a sexual nature that violate a person’s body, privacy or feelings and make that person feel uncomfortable, threatened, insecure, scared, disrespected, startled, insulted, intimidated, abused, offended or objectified.”

Hussein el-Shafei, the Community Mobilization Unit head for HarassMap, told Al-Monitor that the main reason behind harassment in Egypt is the social tolerance for this phenomenon. This tolerance resulted from the spread of a culture of marginalization and scorn toward women that men are brought up on. Such an upbringing makes the violation of a girl’s privacy normal and tolerable.

“Social acceptance of sexual harassment targeting women appears in many forms. First and foremost, girls who face verbal or physical assault in the street are not offered help. Sometimes people just watch the abuse and do not interfere to stop the abuser. Moreover, the girl is [often] blamed for triggering the harassment,” said Shafei.

Shafei added that the absence of express legal texts that criminalize harassment is one of the reasons it is not recognized as a crime committed against the harassed person. He confirmed that Egyptian law does not mention the word “harassment” in any of its articles concerning crimes against women.

According to the Egyptian penal code, public abuses against women are divided into three categories:

Shafei asserted that the media play an important role in spreading a culture of disdain toward women. Advertisements, cinematic productions and songs exploit the image of women to promote their goals. They also portray the abuser or mocker as a cool guy, despite that he mistreats another person. This is the image that the younger generations get and they imitate what they see in the media. Shafei also mentioned that children below the age of 14 were the victims of around 39% of sexual assault cases in 2012.

Moreover, the religious rhetoric that generations are brought up on does not clearly define the relationship between the sexes and the way they should deal with each other. Instead, this rhetoric contributes to harming women, through criticizing women who do not wear head scarves or claiming that the victim is responsible for attracting harassment, according to Shafei.

Chirine Sabet, an anti-harassment activist and blogger, told Al-Monitor that there is a certain environment encouraging harassment, or even rape, of girls. Amid the protests and celebrations currently witnessed in Egypt, the streets are crowded and harassers walk around abusing the female protesters. During the June 30 events, when protesters filled the streets, harassment and abuse against girls took place, sometimes with multiple men collectively harassing one girl.

Ayman Nagi, founded an anti-harassment campaign that started its activity in 2012, told Al-Monitor that the campaign aims at offering youth workshops to raise their awareness regarding the danger harassment poses to the safety and security of society, and to show them that harassment can affect even their sisters or female relatives.

The campaign also aims at offering harassed girls moral support, since many of them suffer from post-traumatic disorders. The symptoms of these disorders include depression, anxiety and self-blame, and specialist doctors help the girls overcome the psychological crisis that accompanies their abuse, Nagi noted.

Other initiatives include the HarassMap, which aims at removing the bad idea about men and the misconception that every male is a harasser. Shafei said that the first steps to solve the harassment phenomenon entail focusing on men, not women, because they are the core of the problem. This crisis concerns men more than women because they are the initiators of the problem.