Although a number of recent developments offer hope to Egyptian women that efforts to combat sexual harassment are working, change is slow. 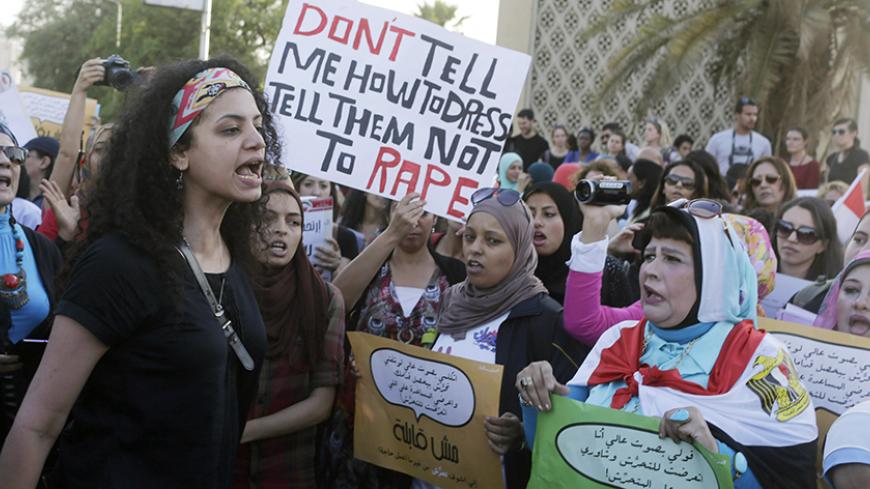 Women chant slogans as they gather to protest against sexual harassment in front of the opera house in Cairo, June 14, 2014. - REUTERS/Asmaa Waguih

An Egyptian TV talk show host who slammed a sexual assault survivor, blaming her for provoking the attack by “dressing immodestly,” has been sentenced to one year in prison.

Reham Saeed’s conviction is a milestone ruling in a country where sexual harassment and assault is so commonplace that it has been described by rights groups as “endemic” and where, for decades, survivors have been stigmatized and blamed for provoking the assaults. Rights activists believe the recent court decision is the result of social media pressure after thousands of activists launched a relentless online campaign using Arabic hashtags that translate to #dieReham and #prosecuteRehamSaeed.

The outcry also prompted an advertising boycott and the subsequent suspension of the show by the management of the privately owned al-Nahar network.

The outpouring of anger came after Somaya Tarek had appeared on Saeed’s show to complain about an alleged sexual assault incident that had taken place in a Cairo mall in October and the police’s failure to arrest the attacker. Rather than condemn the incident and call for the attacker to be held accountable, Saeed instead suggested that the woman herself was to blame, asking her, “Do you think you were dressed appropriately?”

Much to the shock and dismay of viewers, Saeed also showed photos of the woman (allegedly stolen from Tarek’s cellphone by Saeed’s production team), including one of her in a bikini in an attempt to convince the public that the woman had brought trouble on herself because she had been wearing a sleeveless T-shirt.

Tarek’s decision to speak up about her ordeal marks a clear shift in women’s attitudes since the 2011 uprising — a far cry from the pre-revolution days when, for decades, women had accepted harassment as part of their daily lives. Since the uprising five years ago, more women have broken their silence, coming forward to report harassment and sexual assault incidents and to demand justice from the perpetrators of such attacks. According to a 2013 UN survey, 99.3% of Egyptian women had reported being sexually harassed.

“We are not sure whether there has actually been a surge in sexual assault incidents since the 2011 uprising or whether the rise is attributed to the fact that more women are reporting such incidents. It is probably a combination of both,” said Mona Eltahawy, a feminist author and journalist who has written a book titled “Headscarves and Hymens: Why the Middle East Needs a Sexual Revolution.” Eltahawy was assaulted by security forces during a protest in downtown Cairo’s Mohamed Mahmoud Street in November 2011 and was left with a broken arm and a dislocated wrist.

While sexual harassment has been rampant in Egypt for decades, there has been a surge in mob sexual assaults as well as a marked increase in the level of violence practiced against women since the 2011 uprising. Women’s rights groups have said they documented more than 250 cases of mass rapes and mob sexual assaults in the country between November 2012 and January 2014, the majority of them during protest rallies in Cairo’s iconic Tahrir Square. The shocking revelation came in a joint statement released by 29 women’s rights groups after a June 2014 rally to celebrate the inauguration of then newly elected President Abdel Fattah al-Sisi. More than 27 complaints of mass rapes and mob sexual assaults were filed with the police in a single day of violence. In their statement, the rights groups also criticized the government for not doing enough to curb such attacks The assaults took place despite a heavy presence of volunteer rescue squads from nongovernmental organizations, such as Operation Anti-Sexual Harassment and Tahrir Bodyguard, that were patrolling the square.

Anti-harassment groups have mushroomed since the 2011 uprising because of the unparalleled scale of sexual assaults in the country. Those groups have stepped in to fill the vacuum left by the police, as the latter had often turned a blind eye to such crimes and have at times even been accused of harassing the sexual assault survivors who had gone to report the incidents.

Azza Kamel, the founder of “I Saw Harassment,” an Egyptian nonprofit organization fighting sexual harassment, believes the Tahrir assaults were “deliberate, systematic and organized and were meant to keep women out of the public space.”

“We have seen such crimes repeated a number of times at protest rallies in the square during and after the 2011 uprising. Those were not isolated incidents, but were part of a continuing trend. Often, high-profile journalists and activists were targeted in those attacks,” she noted.

It was not until a graphic video of a young woman being sexually assaulted in the square during the June 2014 rally had gone viral on social media that the government was compelled to finally take action.

Seven men were arrested in connection with the brutal assault. The uproar over the video also prompted Sisi to decree long-awaited legislation criminalizing sexual harassment. Those convicted under the law face up to five years in prison in addition to fines reaching up to 5,000 Egyptian pounds ($638).

The decree signaled there was political will to tackle the problem head on. However, a May 2015 report released by the International Federation for Human Rights shattered much of the optimism of rights advocates, dashing their hopes for quick progress. According to the report, security forces were themselves routinely using sexual harassment and abuse against political prisoners and detainees. While the report does not identify victims by name, it nonetheless paints a grim picture of widespread, systemic sexual violence against prisoners in the country.

“We fought long and hard to have legislation criminalizing sexual harassment and assault,” said Fatemah Khafagy, a gender expert and former ombudsman at the National Council for Women.

“While the law has deterred many potential harassers, legislation is not enough. What Egypt really needs is a change in people’s attitudes, and that can only come through education and awareness campaigns.”

But change is happening, albeit slowly. The women are no longer tolerating such crimes and are speaking out. Youths are also raising public awareness through their engagement in dozens of grass-roots initiatives fighting sexual harassment. What remains is for men to realize the extent of the damage and pain they inflict on women they harass and assault. But first and foremost, the state has to come to terms with the magnitude and gravity of the problem, admitting that these are not isolated cases but a cancer that has spread from police stations and prison camps to university campuses and public transport.