The arrest of an accused serial rapist and sexual harasser in Egypt has rekindled public discussion about sexual harassment and abuse after many women shared their stories of the man over social media. 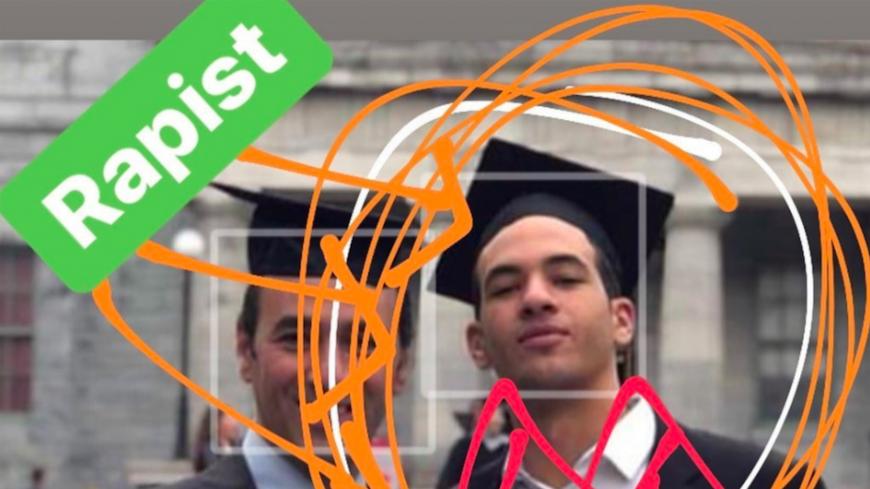 One of many social media posts by alleged victims of Ahmed Bassam Zaki, an Egyptian men in custody after accusations of rape and harassment spread online, depicts the accused with the label "rapist." - assaultpolice.com

Defying the stigma associated with sexual violence, thousands of Egyptian women and girls are joining a rising call for harassers and rapists to be held accountable for their misdeeds. The Arabic hashtags "Listen to the voice of Egyptian women" and "Where is justice for Egyptian women" have gone viral on Egyptian social media platforms after multiple allegations of sexual harassment, assault and rape surfaced against a purported “serial harasser” named Ahmed Bassam Zaki.

In a message directed at Zaki and other harassers, one activist tweeted July 6, “No means no! No does not mean convince me. No does not mean maybe. No does not mean yes." Other activists expressed solidarity and support for the “brave” survivors who shared online accounts of their traumatic experiences of sexual assault at Zaki's hands.

The social media campaign against Zaki, a business student in his mid-20s studying in Spain, was started July 1 by an Instagram account created by an activist who chose not to disclose her identity along with a group of survivors who claimed they had been harassed or sexually assaulted by Zaki at some point in the last five years. Using the Instagram handle @assaultpolice, the women urged other survivors to share evidence of sexual abuse by Zaki.

Dozens of women took screenshots of abusive online messages he had allegedly sent them and published them anonymously for fear of reprisal. One woman posted voice messages from Zaki making lewd comments and threatening to send nude photographs of her to her family if she continued to reject him. Among the others was a girl who said she had been raped by Zaki and who has since sought treatment for trauma at a psychiatric clinic. “I'm not the only one he raped, anally as well,” she complained to a childhood friend who published her testimony in Empower Magazine.

Zaki has been accused of harassing girls at his high school, the American International School in Cairo, before joining an online group of American University in Cairo students and harassing its female members. The daughter of a family friend has also come out about an incident of sexual assault involving Zaki. Young women at the EU Business School in Barcelona, at which he enrolled in 2018, have also spoken out about unwanted sexual advances by him. The online testimonials, shared over various social media networks, sent shockwaves across the conservative society, provoking outrage among women's rights advocates. The unprecedented outpouring of support for the survivors has led some Twitter users to describe it as a “revolution.”

Some users jumped to Zaki's defense, saying that girls who dress provocatively deserve to be raped. Others made excuses for him, arguing he is mentally ill and needs treatment.

Celebrities weighed in with advice for apologists who blame the victims: “A girl's clothes — no matter how revealing — are no justification for assaulting her,” tweeted director and screenwriter Amr Salama.

The National Council of Women said in a July 2 statement that the body was following the case closely. It called on the authorities to investigate the matter and prosecute as appropriate. The NCW also called on survivors “to file lawsuits against the accused so that he may get the legal punishment he deserves and to deter potential harassers.”

Though the NCW assured the survivors that their privacy and confidentiality would be protected if they decided to pursue the matter legally, some of the victims are reluctant to file legal complaints against Zaki “for fear of sullying their reputations,” rights lawyer Nehad Abul Komsan told TV host Amr Adeeb.

On July 8, the cabinet approved a bill that would guarantee the confidentiality of survivors of sexual assault and harassment. Under the draft law, complainants' information would no longer be kept in the case files, but rather in a separate file to be shared only upon request by the court and defense lawyers.

Soon after the NCW statement was published, complaints started trickling in. Within days, more than 100 complaints had been submitted via the NCW 's hotline, including one from a minor who claimed she had been sexually assaulted by Zaki when she was just 14. Several written complaints have since been referred to the prosecutor's office.

The EU Business School in Barcelona, where Zaki had been studying, was notified of the online allegations and immediately took action, announcing his suspension pending investigation. But as complaints against him came flooding in and after Zaki admitted to blackmailing several of the complainants, the university announced its decision to dismiss him.

Speaking to TV host Amr Adeeb off-camera, Zaki's father said his son had admitted to “making mistakes” but had denied the allegations of rape and sexual assault, which he claimed were made via fake accounts.

What started on July 1 as a social media campaign against Zaki has developed into a full-fledged movement against sexual harassment and assault reminiscent of the "me too" movement.

Some activists turned their wrath on radical clerics who accuse women of bringing harassment onto themselves by dressing immodestly. Others vented their frustration toward the authorities for failing to stem the tide of sexual harassment in the country they described as an “epidemic.”

More than 99% of Egyptian women have experienced some form of sexual harassment, according to a 2013 United Nations report. In 2014, an anti-sexual harassment law was passed as an amendment to the Penal Code following a surge in reported sexual assault incidents in the country, many of which were committed by security forces.

Under the law, offenders face jail terms of between six months and five years and fines of up to 5,000 Egyptian pounds (approximately $312). The lengthier jail sentences are reserved for offenses involving multiple perpetrators, offenders who are in a position of authority over the complainant and those carrying weapons. But while the law has been commended by the United Nations as “encouraging,” it has also been criticized by some women's rights campaigners and groups such as Nazra for Feminist Studies as falling short of international rights standards.

“To date, Egypt has no comprehensive law criminalizing sexual violence,” lamented Fatemah Khafagy, a prominent women's rights advocate. “Rights advocates have been calling for a holistic approach to the problem rather than scattered provisions within the Penal Code stipulating penalties for offenders. A comprehensive law would spell out preventative and protective measures such as training of prosecutors and judges, sexual education being incorporated in the school curriculum and services provided to survivors such as shelters,” she told Al-Monitor.

Mozn Hassan, a women's rights campaigner and Founder of Nazra, echoed Khafagy's call for a comprehensive law, adding that political will is needed for such a law to pass. “Women who come forward to report sexual assault or rape need a law that guarantees their protection from the offenders," she said, citing the case of a survivor who was assaulted outside a Cairo shopping mall by her harasser in a revenge attack after she had reported him to the police.

Parliament member Anissa Hassouna, meanwhile, described Zaki's case as “a societal issue.” She hailed the authorities’ “quick response” and the massive online support for the survivors, saying it represents “a cultural shift in how the state deals with sexual harassment cases.”

“The case sends a strong message that there needs to be a change in society. People need to rethink their attitudes toward sexual assault, which is often taken lightly with some even defending such shameful actions and making excuses for the harasser. Most men fail to see the harm they are inflicting on women by hurting their dignity,” Hassouna told Al-Monitor.

She continued, “Even one case is one too many. We are confident that justice will be served. If the defendant is convicted, his punishment should be made public to deter others from such disgraceful behavior.”