Several Fatah leaders told Al-Monitor that the Hamas-affiliated security apparatuses in Gaza arrested them and violated their basic human rights, which Hamas rushed to deny. 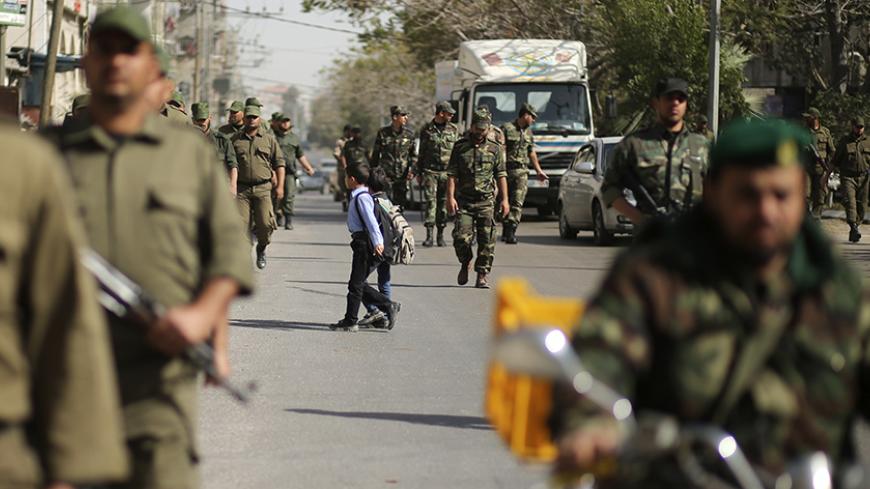 GAZA CITY, Gaza Strip — Nahru al-Haddad did not expect to be arrested for political reasons in January. The Fatah leader in the Gaza Strip told Al-Monitor how Gaza's internal security apparatus subjected him and other Fatah leaders to insulting treatment during their detention. Almost two months after this incident, shock is still written all over his face as a result of the poor treatment.

Haddad, 58, a Fatah secretary in eastern Gaza City, told Al-Monitor, “I have been summoned by the security apparatus dozens of times since its establishment during the days of former Prime Minister Ismail Haniyeh in mid-2007, which is when Hamas took control of the Gaza Strip. I was summoned because of my affiliation with Fatah and the movement’s activities in Gaza, but I was never held for more than a few hours.

“On Dec. 31, 2014, during the ceremony of lighting the flame to celebrate Fatah’s anniversary, an internal security official called me and warned me about holding the event under the pretext that it was not licensed. On the same day, the event took place since [we] had received a license from the Gaza government and the security apparatus.

“A march for unity was supposed to take place in Gaza the next day, but I got a call from the internal security apparatus telling me that this activity would lead to bloodshed and that I was the person responsible. After negotiating with the movement’s command, the march was canceled.”

Two days after the event was canceled, Haddad was surprised when he and several leaders were summoned to appear at the internal security apparatus' office. They immediately obliged, as they thought they were going to be thanked for canceling the event.

Haddad said that they were instead insulted and subjected to ill treatment. “A minute after we arrived, they blindfolded us and moved us to another place, which we reached after about half an hour. I think it was an academic institution, not a detention center, because I could see a sign indicating [as much] when the bandage slightly slipped from my eyes.”

Haddad said that the arresting officers mocked the detained individuals and ordered them to take off all their clothes except their underwear, despite the cold temperature. According to Haddad, the security officers stooped the lowest when they ordered the detainees to address each other with serial numbers and female names.

“When we were climbing the stairs to reach the place, the officers ordered us to call ourselves animal names, like dog and donkey. Whoever slackened was spanked. I was flabbergasted. I could not believe this was happening to me after my long struggle in the occupation’s prisons for years,” he said.

Haddad said that the officers also dragged the detainees by their ears, told them they smelled like animals, scolded them if they shivered from the cold and poured water on them.

The detainees' demands to pray and go to the bathroom were refused, he said. When the officers were done insulting and interrogating Haddad, they asked him to work as an informant for the security apparatus. Upon release, Haddad said some detainees were thrown out into different areas of Gaza.

Several political detainees who underwent a similar experience told Al-Monitor in separate interviews that Haddad's story is true, as they were summoned to the same unknown place and treated similarly.

Al-Monitor met with Mohammad Lafi, head of Gaza's internal security apparatus, who refused to answer any questions related to his officers’ practices in the unknown location mentioned by the interviewees.

Yahya Moussa, a Hamas leader and chairman of the Legislative Council’s Oversight and Human Rights Committee in the Gaza Strip, refused to disclose to Al-Monitor any information about the internal security apparatus' practices and the recent detention of Fatah leaders. He denied knowledge of any such event, and claimed that he did not receive any complaints from human rights organizations or from the detainees themselves.

Attorney Sobhiya Jomaa, coordinator of the Fact Finding and Complaints Unit at the Palestinian Independent Commission for Human Rights in Gaza, noted that the security apparatus' actions are an assault on the freedoms of people and public institutions.

Jomaa told Al-Monitor that the internal security apparatus abused the detainees and insulted their dignity. A week after the group's detention, the security apparatus summoned a group of individuals from north Gaza to find out about their activities in Fatah.

“Any arrest that happens without minding legal methods is despicable. No citizen should be arrested unless the arrest happens as per the law, following reasonable suspicions. The arrested person should not be beaten. There are certain arrest methods and specific investigation conditions, not to mention a set number of hours for the arrest. Failure to comply with any of the above proceedings would imply failure to comply with all of them,” Jomaa said.

Although the internal security apparatus was formed to pursue individuals accused of communicating with Israel, according to its leaders’ media statements, this apparatus has become obsessed with pursuing political opponents. Many Gaza residents see it as the “bogeyman” that will follow them if they criticize Hamas’ policies.

A spokesman for Gaza’s Ministry of Interior, Iyad al-Bozom, said that the security apparatus has achieved many accomplishments in maintaining domestic order, pursuing spies and crippling the occupation’s intelligence abilities. He noted that it has played a heroic role and has faced many challenges with little resources.

“Some citizens who have committed breaches and tried to violate public security will always believe that the internal security apparatus is their bogeyman,” he told Al-Monitor.

Al-Monitor received samples of summoning orders that have been sent to several Fatah leaders to appear at the security apparatus office. Al-Monitor also received documentation of the abuses through human rights organizations. However, Bozom completely denied the arrests. "Everybody knows that the Palestinian arena is divided, despite signing the reconciliation agreement," he said. "We are constantly accused of arrests, but none of the Fatah members’ arrests have been proven. The Ministry of Interior can assert that the security apparatus is ensuring society’s security, and insulting citizens is not part of its mission."

Bozom noted that his ministry’s security apparatus in Gaza follows Palestinian laws and that it is very careful not to violate them.