Hazem Balousha reports on a new Hamas campaign offering amnesty to Palestinians in Gaza who have collaborated with Israel. 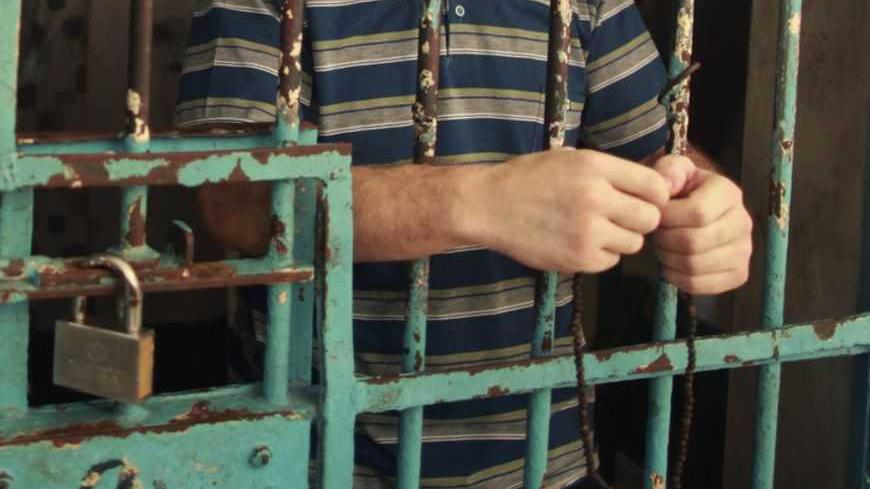 A Palestinian inmate stands behind the bars of a Hamas-run jail in Gaza City after prayers during Ramadan in 2012. - REUTERS/Mohammed Salem

Inside Ansar Central Prison in Gaza City, a security officer in military uniform accompanies a prisoner into a room that looks like a clinic. The prisoner, who has been accused of collaborating with Israel, is seated in front of me. The security officer remains in the room to monitor our conversation.

I ask the prisoner, B.A., if he had any objections to an interview with the press and whether he had been pressured to meet with me. “I am just following orders,” he replied with a little smile on his face. I explained the nature of the meeting to him and that I would be publishing his comments. “No problem,” he responded.  B.A. began the interview with details of his life and his arrest.

“I am 28 years old. I married my brother’s widow to look after his three children. Twenty days after my wedding, I was arrested by the Internal Security Services, in January 2011, on the street where I went to meet them after having received a phone call from them. The caller claimed that he wanted to buy the apartment where I live,” said B.A. “I admitted during the interrogations, which lasted for six months, that I had been collaborating with the Israeli intelligence services by providing them with information from the Gaza Strip for six years. After nearly eight and a half months, I was referred to the military court, where I was sentenced to life in prison.”

The security officer present during the interview did not hesitate to interrupt when he objected to some of the questions. B.A. said he had not been tortured during the investigation, only slapped in the face or ordered to stand facing the wall when he lied about information, and that he forged a good relationship with the investigator over a period of time.

A man wearing black who identified himself as an internal security officer entered the room at one point. He asked the prisoner about the details of his arrest. The prisoner, confused, said, “I have already undergone interrogation. I have nothing to do with murder or anything like that, and I have been sentenced.”

When the interview was over, the internal security officer approached me and expressed his irritation at the way I had conversed with B.A., in particular my asking him about being tortured in prison. “We have methods other than torturing to obtain information,” he said. “Rest assured, our techniques and tactics have long exceeded this stage.”

I had learned from a knowledgeable source of complaints that the prisoner had been “unjustly treated” and had appealed to the courts because the “charges are trumped-up, and it’s all about politics — nothing more.”

On March 12, the Interior Ministry in Gaza launched the National Campaign Against Collaborating With the Enemy, which set a deadline of April 11, 2013, for collaborators with Israel to turn themselves in and receive amnesty. It is the second such offer of amnesty, following a similar campaign launched in July 2010 that lasted until the end of that year.

The Interior Ministry refuses to disclose the number of people it has in its custody from the first campaign. Local security sources said, however, that the security services had arrested an estimated 30 collaborators discovered during Israel's eight-day Operation Pillar of Cloud offensive in November 2012.

Islam Shahwan, a spokesman for the Interior Ministry, said in a press release, “Operation Pillar of Cloud allowed the internal security apparatus to reorganize themselves, identify the points of strength and weakness, and learn more about the relationship between the intelligence and agents. This enabled it to capture more of them.”

Israel uses collaborators to help it identify the location of militants affiliated with the various Palestinian factions, as well as weapons storage sites, tunnels, missile launchers, and houses in which political and military leaders hide.

Muhammad Lafi, an internal security official, said the apparatus has a list of collaborators who will be arrested if they do not surrender during the campaign. He noted that their families would be guaranteed a monthly salary from the Ministry of Social Affairs to avoid extortion by others who might threaten to turn them in.

Security prisoners are usually referred to military courts in Gaza, based on the Revolutionary Penal Code of 1979 issued by the Palestine Liberation Organization, although it was not incorporated into the Palestinian legal system, and human rights organizations charge that it denies the minimum guarantees of a fair trial.

According to the Independent Commission for Human Rights (ICHR), since Hamas’ takeover of Gaza, military courts have issued 13 death sentences against alleged collaborators. Six sentences have been officially carried out. During Pillar of Cloud, militants killed seven alleged collaborators in the streets of Gaza City. Previously, during the 2008–2009 war with Israel, 15 others were similarly killed.

According to article 10 of the Palestinian Basic Law, no one should be subjected to coercion or torture, and defendants and detainees should receive decent treatment. In addition, statements or confessions obtained in violation of basic human rights and freedoms are invalid.

The ICHR noted in its 2011 annual report that it had received complaints that included alleged violations of physical safety. Twenty-seven of 102 complaints from Gaza were against the internal security apparatus.

The report went on to state that the internal security apparatus had declined to respond to inquiries by the ICHR on the issue. The same was true of the Gaza police and military justice apparatus. Concerning the public prosecutions, the ICHR received responses from the attorney general about complaints related to claims of physical abuse, he did not, however, consider allegations of torture or other ill-treatment to be valid.

Hazem Balousha is a Palestinian journalist based in Gaza City. He has worked as a producer for BBC World Service and has been a contributor to The Guardian (UK), Deutsche Welle (Germany), Al-Raya (Qatar) and other news organizations.