Rights groups and activists have documented a rise in cases of torture against detainees and prisoners in the Gaza Strip, while the Ministry of Interior says it is launching investigations into the incidents and imposing sanctions. 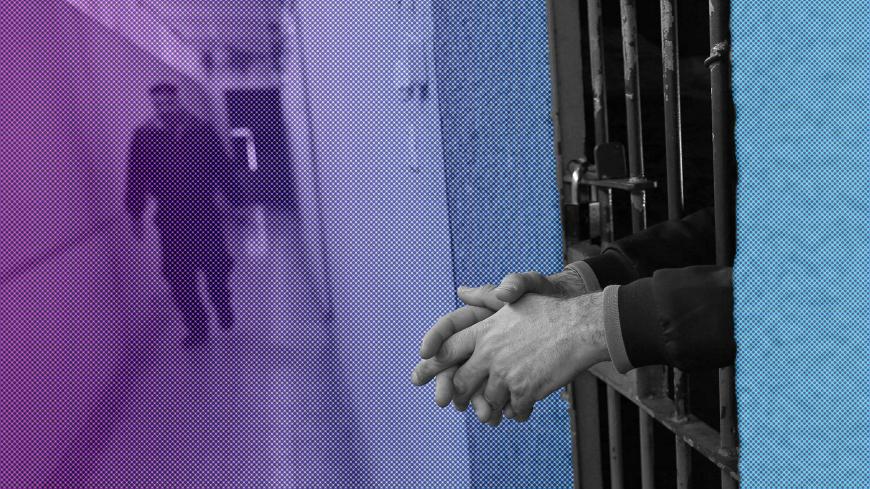 The number of victims of torture in Hamas-controlled prisons and detention centers in the Gaza Strip has increased significantly in recent months based on reports by Palestinian human rights centers. Torture has become a key method of interrogating detainees in the majority of cases.

Mohammed Sufian al-Qassas, 30, a resident of Khan Yunis, was arrested on Sept. 18 by three officers of the intelligence services inside his internet cafe, claiming they had received complaints that some of his clients were “insulting God.”

His uncle, Mohammed Yahya al-Qassas, told Al-Monitor that the officers attacked him severely before his arrest.

“They started beating him up using their guns and sticks ever since they got ahold of him in the cafe until they arrived at the headquarters of the intelligence agency. When they took him in, they brutally assaulted him all over until blood came out of his mouth, nose and ears. His face got all swollen and he ended up with some broken ribs, a dislocated shoulder and a smashed foot. They then held his head over a toilet seat and poured burning hot water all over his face,” he said.

Yahya Qassas explained that after the torture, which lasted for several hours, they left his nephew at the door of a hospital in the city of Khan Yunis. “Later we were informed of his presence at the hospital and we were shocked by the sight and the amount of torture he was obviously subjected to. He was in a coma for 2½ days,” he noted.

Many cases of torture have occurred in Hamas-controlled prisons and detention centers in the Gaza Strip, some of which resulted in death, such as Hassan al-Humeidi, 23, from Deir el-Balah, who died after being tortured on Nov. 3, 2011.

His brother Ali al-Humeidi told Al-Monitor, “My brother Hassan was arrested without any charge, and he had never been summoned before. I remember he was asleep when a special police force broke into the family's house in Deir el-Balah and arrested him. Less than an hour into the interrogation, he was beaten all over, his bones were broken and he was hit on the back of his head with a weapon, causing an internal bleeding.”

Hassan remained in a state of clinical death for a week until he was declared dead on Nov. 11, 2011, according to his brother.

The Humeidi family told Al-Monitor about a video filmed by the Ministry of the Interior in Gaza that documented the arrest of their son. The family documented in another video the signs of torture on his body.

Human rights organizations operating in the Gaza Strip have monitored many cases of torture in Gaza prisons in 2016-17, which were described as “recurring.”

After he was severely tortured, detainee Khalil Abu Harb, from Gaza City, committed suicide on Sept. 19. The Palestinian Center for Human Rights (PCHR) demanded in a Sept. 20 statement that the attorney general and decision-makers in the Gaza Strip stop what the PCHR described as a state of decay in detention centers. The PCHR demanded that they put an end to torture in prisons and abide by Palestinian law.

The Independent Commission for Human Rights (ICHR) issued its monthly report for July on Sept. 20. The ICHR noted that during July, it received 38 complaints of torture and ill-treatment in the Palestinian territories, 26 of which were in Gaza, and they included 22 complaints against the police and four against the Internal Security Service.

In its annual report for 2016, the ICHR revealed that it documented hundreds of complaints submitted by victims of torture in detention centers and prisons in the Gaza Strip that year.

PCHR's legal researcher Mohammed Abu Hashim told Al-Monitor that there is a lack of comprehensive and accurate statistics on cases of torture in prisons and detention centers, because the victims of torture are reluctant to confront the authorities. They do not trust in their ability to protect them or provide some form of compensation either by the judiciary or human rights centers.

Abu Hashim added, “The vast majority of defendants are subjected to one or more methods of torture. The journey of torture begins from the time of arrest until the trial. Torture is a systematic policy of interrogation, and it is more rampant with arrests of a criminal nature. Alleged criminals are reluctant to submit complaints because of the nature of their cases, and the interrogators justify torture with the lack of other resources, claiming that security cannot be achieved otherwise.”

Said Seyam, the minister of interior in the government formed by Hamas after winning the 2006 legislative elections, announced on April 20, 2006, the opening of a new position for general inspector of the Ministry of Interior to monitor the work of the government security services.

Speaking to Al-Monitor, the general inspector, Mohammad Lafi, said that they formed committees to investigate all recent incidents that led to injuries and deaths among the detainees, stressing that the results of the investigation are binding.

He added, “Today, for example, I received the results of an investigation, and they have been applied. Punishments vary according to the charge, either those found guilty are imprisoned or their ranks are lowered, as some are high-ranking officers, and we investigate everyone and everything to get to the truth. We understand cases of self-defense, if the arrestee was not being cooperative and attacked the officers, we get why they would use force, as long as it does not turn into torture.”

Lafi believes that, to date, the committees have not proved any deliberate killings, describing the illegal violations committed by some officers as “undeliberate and reflecting wrong judgment in the field.”