The recent arrest of two satirists in Gaza points to increasing restrictions on freedom of expression due to Hamas' insecurity. 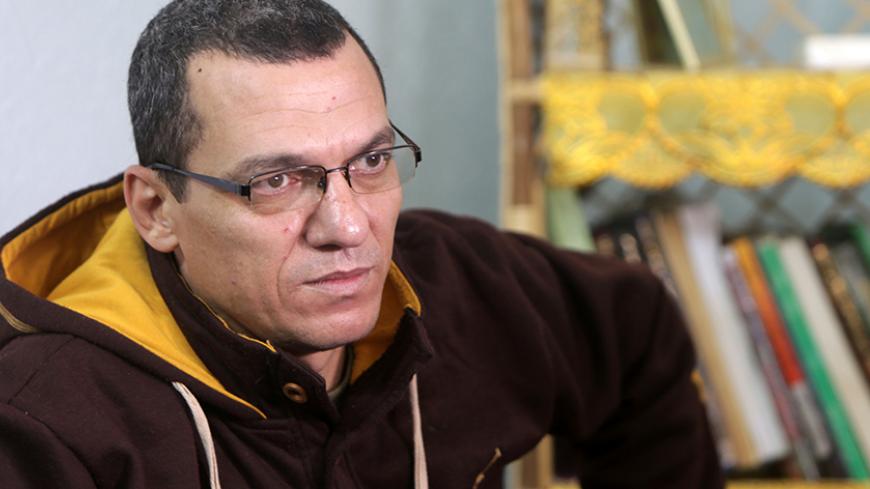 GAZA CITY, Gaza Strip — The Ministry of Interior in the Gaza Strip ushered in the new year by launching what many view as a war on political satire, sending a warning with the Jan. 3 arrests of Ayman al-Aloul and Ramzi Harzallah. In December, parties in government close to Hamas had filed complaints with the public prosecutor against them because of their activities online.

Aloul’s son, Omar, told Al-Monitor, “A military jeep and two Hyundai cars stopped in front of the house, in the Sabra neighborhood, south of Gaza City. Several individuals got out of the vehicles and introduced themselves as members of the internal security apparatus. They asked my father to step out of the house, without letting him change, so my grandmother wrapped him with a fleece robe.” Omar added, “They asked for all the laptops we had in the house, and one of them told my grandmother that her son is too comfortable expressing his opinions on Facebook.”

On Jan. 3, Al Mezan Center for Human Rights posted notice of Harzallah's arrest on its website. It read, “Individuals who introduced themselves as members of the internal security apparatus arrested Harzallah, a political activist from al-Wahda Street in central Gaza City. They confiscated his laptop and cell phone and took him to an unknown destination.”

Khalil Shaheen, manager of the Economic, Social and Cultural Rights Unit of the Palestinian Center for Human Rights, told Al-Monitor that summoning satirical writers for expressing criticisms is a violation of freedom of expression.

Al-Monitor had spoken with both Harzallah and Aloul before their arrests to ask them about the complaints filed against them with the public prosecutor. Aloul told Al-Monitor on Dec. 20, “Around two months ago, I posted on Facebook [a story] about a school in Gaza in which there are separate classrooms for Hamas-affiliated teachers and Fatah-affiliated teachers, and I stated the school’s name but later deleted the post.” He did not receive threats regarding the posting.

According to Aloul, he did not mention whether the classroom divisions stemmed from a decision by the Ministry of Education or some other official body, but he did say it was the result of social division. Regardless, the Ministry of Education filed a complaint with the public prosecutor, Ismail Jabr, accusing him of lies and defamation. On Dec. 10, Jabr summoned him for questioning, meaning that the case had been referred to the Magistrates Court. While Aloul awaited notice of his hearing, internal security authorities detained him.

On Dec. 28, Harzallah told Al-Monitor that he had received a phone call ordering him to report to the public prosecutor's office in Gaza City. “I thought the call was an attempt to muzzle activists in Gaza so that no one would speak up about injustices,” he said. “No matter what happens, I will not stop being an activist, even if it costs me my life. The important thing is to defend people’s rights.”

The video showed border guards affiliated with the Ministry of Interior using their mobile phones Dec. 24 to take pictures of Isaac Hassan as he walked and swam in the Mediterranean toward the Egyptian border. The guards watched as Egyptian army personnel shot and killed Hassan, who was unarmed and said to have been desperate to go to Egypt for medical treatment. The incident was widely reported. Harzallah described the video as the “green occupation,” a reference to Hamas.

After they were detained, Aloul and Harzallah’s Facebook pages were removed. Al-Monitor tried, though to no avail, to meet with representatives from the Ministry of Interior to inquire about the summoning of the activists. Ministry spokesperson Iyad al-Bozom asked for interview questions to be sent in writing and said, “Freedom of opinion and expression is guaranteed to all citizens in the Gaza Strip in accordance with the Palestinian Basic Law. Should any citizen be summoned, it would be by virtue of the law.”

Samir Zaqout, coordinator of the Field Research Unit at Al Mezan, said the detention of both activists was not in accordance with the law. According to him, the internal security apparatus, which detained the men, does not have the right to act as a judicial enforcement authority. Only representatives of the public prosecutor and the police, instructed by the public prosecutor, have the right to do that.

“Everyone has the right to express their opinion in a suitable manner, as long as it does not violate the law and does not include revealing military or security secrets or defamation of people and their private lives,” Zaqout told Al-Monitor. “Judicial proceedings are crystal clear, and the prosecution has the right to summon anyone to testify, but their houses should not be raided in order to arrest them, their dignity should not be harmed and suspicions about the person arrested should not be spread.”

On Jan. 4, a group of journalists and human rights activists circulated a petition, collecting more than 1,000 signatures, calling for the release of Aloul and Harzallah. The group also staged a protest in front of the government media office in Gaza.

In another case, on Dec. 17, security intelligence summoned the satirist Akram Sourani for questioning after his participation in an episode of “al-Nashra,” a political satire program, aired on YouTube. Civil society figures intervened on his behalf to mediate with Hamas, allowing him to avoid interrogation.

Al-Nashra, first screened July 10, was the first satirical show program produced by Palestinian Khabar Press, a local media agency. The New York Times ran an article about it June 19 and reported that Hamas had not objected to the show. Only two episodes were broadcast, however, as political satire in Gaza has become threatened with extinction.

Harzallah and Aloul were released Jan. 11. Aloul told Al-Monitor after his release, “I will no longer write, I am afraid. They beat me and put me in solitary confinement. I don’t want to go through the same experience again. Maybe next time they will shoot me.”

Aloul added, “Everyone is quiet. Things have changed now. My arrest was a message to public opinion. Some security officers in prison told me that they have problems with the Palestinian Authority, Israel and Egypt, which is why they will no longer tolerate our criticism and us inciting people against [the security forces].”