Arrests in the Gaza Strip point at Hamas' harsh treatment of protesters and its civil rights violations. 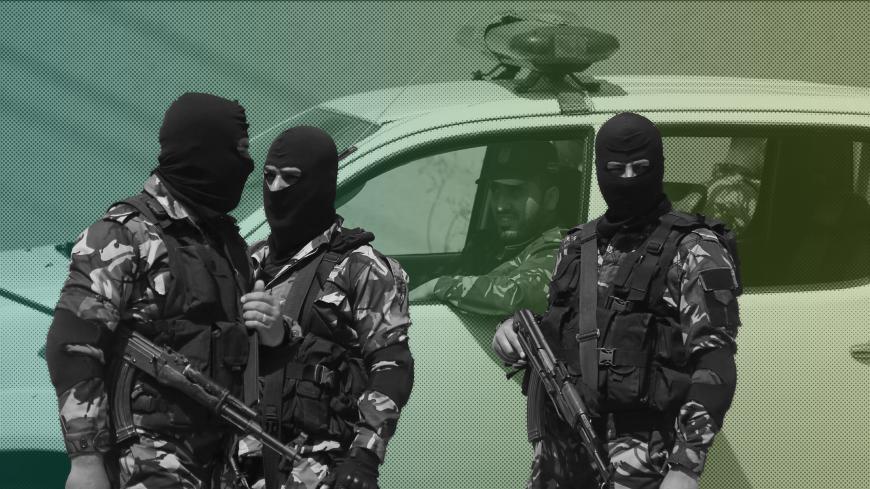 GAZA CITY, Gaza Strip — Al Mezan Center for Human Rights released April 23 a "fact sheet" on violations of the people’s rights to assemble peacefully, express opinions and not be subject to arbitrary detention in the Gaza Strip.

The information presented was gathered between March 1, 2018, and March 1, 2019, as part of an EU-funded project to document rights abuses and promote compliance with international law.

The statement indicates that the Hamas government security service in the Gaza Strip summoned, arrested and detained 742 people, including five women, as they were exercising their rights, because of their political affiliations. The fact sheet reports bans on media coverage of protests and restrictions on the press, as well as theatrical and drama productions deemed to be anti-government.

The numbers would have been even higher, but the project ended just before the “We Want to Live” popular protests against the poor economic and humanitarian conditions in Gaza. During the protests, which ignited March 14 in Gaza City, security services arrested hundreds of protesters. Also, there were many reports of police using excessive violence in dispersing protesters, human rights activists and journalists.

“The 'We Want to Live' protests, which Hamas perceived to be a global conspiracy targeting the movement, have doubled the number of prisoners [being held for expressing their opinion] in an attempt to prevent the protests from escalating,” Samir Zaqout, Al Mezan's director of monitoring and awareness, told Al-Monitor.

Human Rights Watch has reported that the Fatah-led Palestinian Authority (PA) in the West Bank and the Hamas government in the Gaza Strip both arrest and torture peaceful opponents and critics, with each party targeting the supporters of the other.

Such arrests fluctuate depending on the political climate in the Palestinian territories. The political conflict between Hamas and Fatah has caused lawlessness for years, Zaqout noted. He confirmed that when the government in the West Bank arrests Hamas supporters, the Gaza government rushes to arrest Fatah supporters.

Zaqout said that Hamas is trying to hold on to the reins of its rule in the Gaza Strip and has become very sensitive to any criticism.

Al Mezan monitors and documents the violations, keeping the UN and relevant human rights organizations informed. “We are trying to reduce abuses of the law and ensure protection, albeit modest, to detainees in prisons,” Zaqout said.

He explained that obtaining permission to visit detainees in prisons has been an obstacle, as the Gaza security services delay and use excuses to prevent visits from taking place. Another obstacle is that complaints against security staff are handled internally. “We are told that the security members in question are being held accountable, but we don't know how. Holding these members accountable doesn't take place according to the law in force in the Palestinian territories, which requires the general prosecution to take action," he said. This makes the complaints basically "worthless,” Zaqout added.

“There is no separation of powers, and the executive power is dominating all other authorities, which encourages greater and more violations,” he said.

Mohamed Safi was arrested March 19 for participating in the protests. Though he was released March 21, he has been summoned to return repeatedly for unspecified reasons.

Family members declined to talk to Al-Monitor about the arrest, but according to previous media reports, the family blames the security services for Safi losing his eyesight. Security officials knew that he suffered from optic nerve disorders and was supposed to undergo surgery on April 9, yet they summoned and detained him that day for hours, according to the reports. Also, the Gaza government didn't allow him to leave the Gaza Strip through the Beit Hanoun crossing April 17 for treatment in Ramallah, even though he had already obtained the needed Israeli permits to cross. After being detained again for hours, Safi was notified that he was not allowed to leave the Gaza Strip, but he was given no reason.

Human rights activist Bilal Kheir Eddin was arrested March 12 for calling on the people to join the coming “We Want to Live” protests via Facebook. He was released April 7 after his lawyer signed an agreement that Kheir Eddin wouldn't write political and instigative posts. Kheir Eddin told Al-Monitor, “I was tortured and accused of working to the advantage of external agendas, such as the PA and Israel.”

He said his detention was extended after he was accused of hostility to public policies. While he was detained, he said, he was told that if he continued to write such posts on social media, his captors would ruin his reputation by fabricating drug trafficking and ethics-related charges against him. He said he never expected that his own government would terrorize him. “It would have been easier for me to be held in Israeli jails than in Palestinian ones,” Kheir Eddin said.

He noted that local and international human rights centers didn't follow up on cases of political detainees in Gaza prisons, which gave captors the confidence to go too far with their abuses. Kheir Eddin added that social media activists’ pressure for the prisoners' release had in some cases negatively affected them. “I was subjected to further torture and humiliation with every demand made for my release,” he said.

“I am leaving the country if I ever get a chance," he stated, adding, "The slim chance I have to live abroad is better than being humiliated in my own country.”

Moemen al-Natour was an organizer of the “We Want to Live” protest. He was arrested March 25 and released March 31. He told Al-Monitor, “I was accused of being supported by the Israeli Blue and White party. I don't know how they fabricate charges without any evidence.”

Natour said he was tortured and arrested on the same charges as Kheir Eddin, and he was supposed to appear before the military court. Yet the aggravated security situation in the Gaza Strip — with rockets being fired at Tel Aviv on March 21 and the Israeli military response — preoccupied Hamas and prevented him from appearing before the court.

Natour said that from now on he will refrain from even raising the humanitarian demands upon which the protest was based, fearing for his and his family’s lives. Having been threatened with death, Natour said, “We are ruled by the law of the jungle.”

He said he wants to leave the Palestinian territories when the opportunity presents itself, adding that while he was detained the military commanders told him that the attitude toward migrating youth is "good riddance."

Speaking to Al-Monitor, political analyst Talal Awkal expressed fear that the Gaza security services are using a policy of repression to help secure its control over the Gaza Strip. “Hamas needs to know that resorting to repression in handling the security situation could result in its rule collapsing,” Awkal noted.

“The use of violence to repress freedom of expression and opinion is not [advantageous for] any government. Hamas needs to learn the lessons of the Arab Spring in the neighboring countries,” he added, referring to the 2011 uprisings.

The Interior Ministry did not respond to Al-Monitor's request for comment.