Rights organizations and activists in the Gaza Strip called on Hamas to stop its violent repression of peaceful demonstrations that erupted there against deteriorating living conditions. 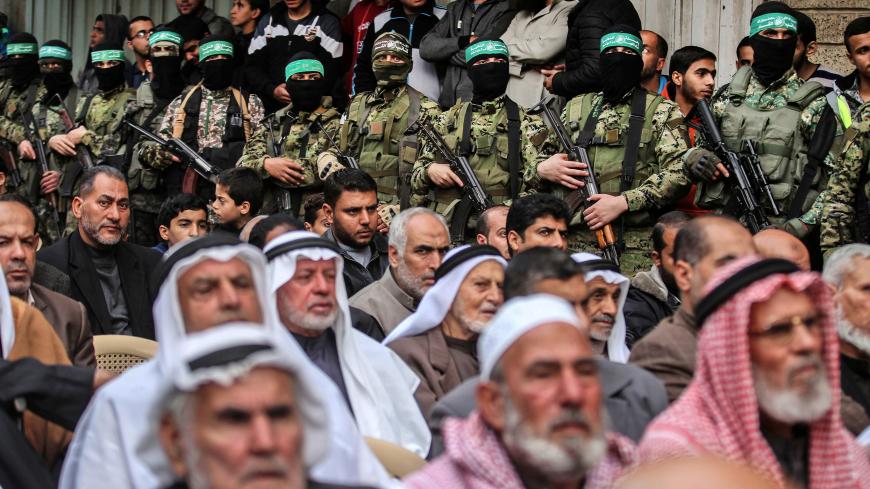 Palestinian men watch as fighters from the Izz al-Din al-Qassam Brigades, the armed wing of Hamas, take part in a military show ahead of the 30th anniversary of the movement's founding, Khan Yunis, Gaza, Dec. 5, 2017. - SAID KHATIB/AFP/Getty Images

GAZA CITY, Gaza Strip — Coming just days before a rocket fired from the Gaza Strip into southern Israel erupted into an exchange of missiles between the two sides, a Hamas crackdown on peaceful protesters in Gaza has drawn the condemnation of other factions and human rights groups. Hamas, however, says the Palestinian Authority (PA) and President Mahmoud Abbas instigated the protests as a political ploy.

Palestinians have taken to the streets under the slogan “We want to live,” protesting price hikes and the dire living conditions in the Gaza Strip. Hamas’ security forces cracked down on demonstrators soon after the protests began March 14, arresting hundreds of protesters and using violence to disperse the gatherings. Several human rights activists and journalists were arrested; their phones and cameras were confiscated.

The director of the Gaza-based office of the Independent Commission for Human Rights and the head of the commission’s complaints department were beaten March 16 as they were documenting the crackdown on protesters in Deir al-Balah town in central Gaza Strip.

Local human rights organizations condemned the violence and suppression, stressing that the freedoms of expression, peaceful assembly and political participation are guaranteed by the Palestinian Basic Law and cannot be violated under any pretext.

UN Special Coordinator for the Middle East Nickolay Mladenov on March 17 also strongly condemned the arrests and violence used by Hamas security forces against demonstrators, including women and children.

Hamas has accused the PA of orchestrating the demonstrations, although demonstrators have stated they are only calling for better living conditions, with no political motivation. Hamas called on its supporters March 16 to take to the street and demand the ousting of Abbas, in what some observers said was a bid to offset the popular movement.

In a March 19 statement, Hamas expressed regret over any damage that might have been caused to the demonstrators. It urged human rights groups to continue working and stated that Palestinians have the right to express themselves peacefully.

Still, the security forces continue trying to disperse the demonstrations.

About 10 Palestinian factions met March 16 in the Gaza Strip to affirm their support for the “just demands” called for in the demonstrations, which they described as peaceful. They rejected all forms of repression and the violent crackdown on freedoms and rights.

The factions also demanded that Hamas and Gaza officials withdraw security forces and gunmen from the streets and public squares, release the arrested protesters and hold accountable those who attacked the demonstrators. The factions further said that the crisis gripping the Gaza Strip is the result of the Israeli blockade and the Palestinian division, and has been further exacerbated by the PA's punitive measures and additional taxes imposed by Hamas.

Hamas recently increased taxes on cigarettes, which are seen as a primary source of income for the government. At the beginning of the year, Hamas also imposed new taxes on imported goods that have alternatives in the Gazan market. Hamas said the taxes are designed to protect local products. The Gaza-based Coalition for Accountability and Integrity (AMAN) has called on the Ministry of Finance in Gaza to reverse the additional taxes, which have weighed heavily on the cash-strapped people suffering under the siege and punitive measures.

“The [peaceful] demonstrations are a result of the difficult economic situation the people of Gaza are living in and the neglect of the officials, who are preoccupied with their political differences,” Momen al-Natour, one of the organizers of the “We want to live” demonstrations, told Al-Monitor before he was arrested by Hamas on March 21.

Natour explained that mainly young people from the Gaza Strip called on people over social media to take part in weekly peaceful protests across all governorates, demanding job opportunities, noting that the repression they faced early on in the demonstrations pushed them to continue protesting.

What started out as peaceful demands on social media could turn into full-blown calls for strikes, mass disobedience and sit-ins, he said, adding that the movements will continue.

“We don't follow any political party," Natour said. "Our demands are strictly social, aiming for better living conditions and ways to solve unemployment, which currently stands at 53% in the Gaza Strip, and to reverse the decision to slash salaries of the employees in Gaza.”

Hamas and the PA are blaming one another for the demonstrations. Hamas says the dire economic conditions are the result of the PA’s policies on the Gaza Strip, while the PA claims the situation has resulted from Hamas’ mismanagement of the coastal strip. Natour noted that the protesters are only calling for better living conditions and social justice — not the overthrow of Hamas or Abbas.

Natour added that security forces broke into his house and confiscated the phones of his parents, who received a notice March 16 telling their son to surrender to Hamas' internal security branch, which he said he will not do. He is still hiding for fear of getting arrested. According to Natour, everyone arrested was tortured, humiliated and accused of collaborating with Israel and the PA. Some of those arrested were released after signing a document pledging not to take part in the demonstrations, but a large number of protesters remain in detention.

“We are well aware that we can't topple Hamas’ rule, which has a strong military wing that helped the security forces to disperse the demonstrations. We are only calling for a decent life," he said.

For its part, Hamas police said demonstrations were dispersed because the organizers hadn't obtained permission. According to Natour, Palestinian law doesn't require peaceful protesters to get permission.

“This is a partisan police fight to protect Hamas, not the people. We hope that the government will absorb the situation instead of confronting it with violence,” he concluded.

Political analyst Tala Okal told Al-Monitor that the demonstrations are not surprising, given the deterioration of the situation in the Gaza Strip and the crises that affect people. He explained that Hamas tried to avoid this popular explosion by launching the Great Return March last year.

“A year later, the Great Return March has not achieved its objectives, leaving the people in even more despair, which made it only normal to break their silence and call for their basic human rights,” Okal said.

He stressed that it is not right for the Hamas government to claim that the demonstrations are politically motivated to defend its mismanagement of the coastal enclave. “They ought to … take the right measures to decrease taxes and create job opportunities,” he said.

“Hamas must know that the repressive security measures will lead to more violence and ultimately the collapse of its rule. They also need to consider this: The people who sacrificed more than 250 martyrs and more than 30,000 wounded in the Great Return March are ready to pay [with] their freedom as a price to improve economic and living conditions,” he said.

Samir Zaqout, deputy director of the Gaza-based Al Mezan Center for Human Rights, told Al-Monitor that the police claim that the demonstrations did not have a permit is baseless and that this is their right according to Palestinian law.

Zaqout explained that these demonstrations should not be dispersed unless there were attacks on public property, and even if that were the case, the dispersal should have been done properly, not by beating and arresting protesters and storming their homes without warrants. Journalists were also banned from covering the developments and their equipment was confiscated.

“The public prosecutor in Gaza must act immediately to stop these serious human rights abuses. Hamas’ violent acts should not be forgiven just because it is upholding the resistance,” Zaqout said.