Thousands of Palestinians participated in Friday protests along the Gaza-Israel border for the second week in a row, with clashes leaving at least seven dead. 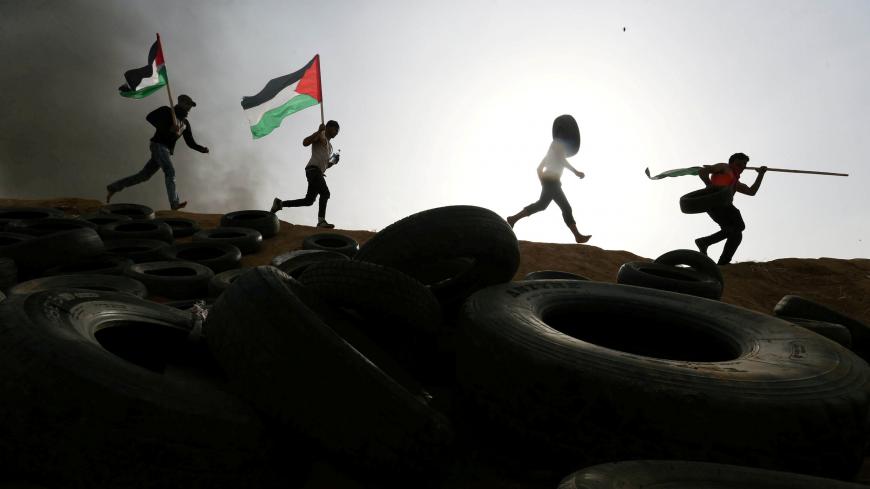 GAZA CITY, Gaza Strip — Thousands of Palestinians are participating in demonstrations along the Gaza-Israel border for the second week in a row, with at least seven protesters killed by Israeli army gunfire April 6, according to the latest statistics from Gaza’s Ministry of Health. This follows massive clashes March 30 that left 17 dead and over 1,000 wounded.

The "Great Return March" that took off March 30 on the eastern border of the Gaza Strip comes amid growing frustration at a decadelong border blockade on the coastal enclave. The protests have united the Palestinian factions on the ground and hope to offer a unified Arab stance pressing to alleviate the humanitarian crises in Gaza. The protests are planned to continue until May 15, which marks the 70th anniversary of the Nakba — Arabic for “catastrophe” — when 750,000 Palestinian were forced from their homes when Israel was established in 1948.

The number of protesters is expected to rise as May 15 approaches, raising concerns among the Israeli authorities. Salah Abdel Atty, a member of the coordination committee for the march in Gaza, told Al-Monitor, “The rallying for the Great Return March will continue and will culminate on May 15 marking Nakba Day. We are coordinating with the Palestinian diaspora to increase participation in the occupied territories and the diaspora.”

Atty said that the committee wants to achieve key strategic goals, noting, “The protests aim at mapping a new path for the Palestinian cause and asserting the right of return for the refugees, as per UN Resolution 194. Protesters refuse any humiliating settlement under the name 'deal of the century' and they object to the US decision to consider Jerusalem the capital of Israel and move the US Embassy to Jerusalem. The protests seek to reunite Palestinians at home and abroad.”

Alongside the youth, Palestinian families including women, children and men are participating in the protests, and the nationalist and Islamic factions have called for peaceful protests to commemorate the 42nd anniversary of Land Day (March 30). Thousands of Gazans who have lived under the Israeli siege for 11 years and suffer from the internal political division have participated in marches in six areas along the eastern border of the Gaza Strip.

The protests have gained attention in the Arab world and the West. Kuwait, which represents the Arab Group at the UN Security Council, called for an emergency session. Participants, however, failed to agree on the issuance of a statement on the Israeli practices against the protesters in the first week of the marches, due to US objections.

Atty said the US administration is biased toward Israelis, which he accused of committing "organized international crimes."

"The Palestinian leadership should benefit from its membership in the International Criminal Court [ICC] to reclaim Palestinians' rights," he added.

Organizers of the marches, who are lawyers affiliated with independent rights’ centers, told Al-Monitor that the coordination committee of the Great Return March is preparing a pro forma trial for the leaders of the Israeli army, as part of the border protests in the east of the Gaza Strip in the coming days. The aim is to alert the Palestinian Authority (PA) to the importance of benefiting from its new membership in the ICC to punish the Israeli army for its crimes of killing peaceful protesters.

Saudi newspaper Elaph reported March 31 that Egyptian officials are in contact with the United States, Israel and the Palestinian authorities to contain the situation, avoid escalation and stop the Palestinian bloodshed.

The PA ministers were quick in issuing a response on the Israeli attacks. Palestinian President Mahmoud Abbas declared a day of national mourning March 31 to honor those who died during the marches, even though he had voiced willingness to impose sanctions on Gaza at the end of March after the bombing of the convoy of Palestinian Prime Minister Rami Hamdallah March 13 during his visit to the Gaza Strip.

Palestinian Islamic Jihad considered Abbas’ stance positive, and the leader and head of the coordination committee of the Great Return March, Khaled al-Batesh, told Al-Monitor, “Abbas’ reaction was important, and I hope the measures he took against the Gaza Strip will be discussed and that he will take steps to promote citizens’ resilience in Gaza.”

Hamas spokesman Fawzi Barhoum told Al-Monitor, “Abbas’ speech was not a responsible one and it was disappointing because it did not serve the demands of the Gaza Strip. Abbas should take immediate action to lift the sanctions and walk a serious path to national unity by developing a united national strategy instead of seeking to achieve political gains at the expense of the Palestinians’ sacrifices in Gaza.”

Mustafa al-Sawaf, a political analyst with the newspaper Felesteen, told Al-Monitor, “The marches that started March 30 are considered a change in the track of the crisis plaguing the Gaza Strip since 2006, as they unite the Palestinian factions and people under one umbrella.”

He said, “The ongoing protests might achieve major gains for the Palestinian cause, but this requires ongoing efforts from the Palestinian factions and people and requires a change in Abbas’ general policy toward the reconciliation and the current crises in Gaza.”

He added that the ongoing protests might push the Jordanian regime that oversees the holy Islamic sites in Israel to change its politics and “to ruin the historical strategic relations between Israel and Jordan.”

Israel is also worried about the increasing security tensions on the borders with the Gaza Strip, and the Israeli army is on full alert. Many Israelis who live in close proximity to the Gaza border have left their houses until the situation calms down.

Palestinian journalist Mamoun Abu Amer told Al-Monitor, “Israel is afraid of the expansion of public protests as protesters or resistance members might be able to cross the border fence with Israel for the first time during massive protests in May, thus leading to more casualties and increasing security risks.”

Eighty-five tents were set up for protesters in six locations along the eastern borders of the five provinces of the Gaza Strip. Some families and individuals are living in the tents, where many cultural, social and entertainment activities are taking place. The sites have facilities for food preparation and there is entertainment for the children; wedding parties are taking place to the beat of Palestinian folkloric dabke.

The coordination committee will announce a series of cultural and national activities to commemorate Palestinian Prisoners Day on April 17, and more activities are planned for Nakba Day on May 15.