The odds of the UN passing a resolution to send a protective force to the Palestinian territories are slim, but recent violence there has given the proposal legs. 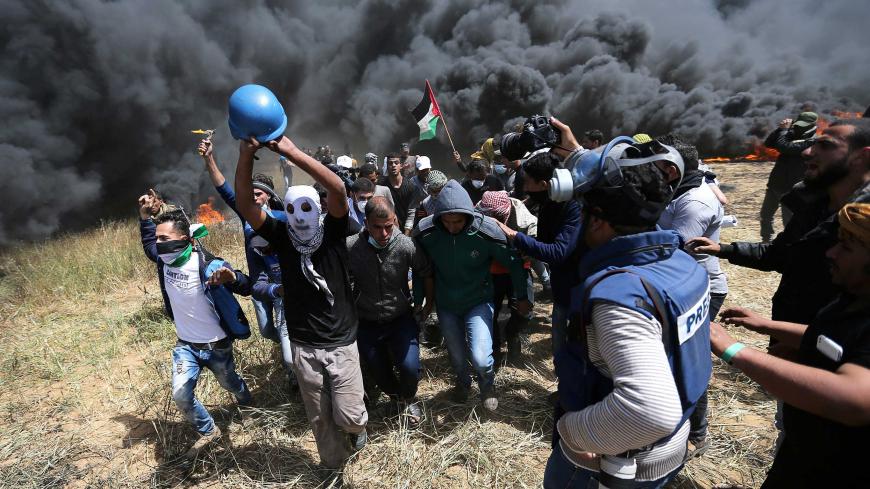 Following Israel's bloody crackdown on Gaza Strip demonstrators in May, some Middle East groups are calling for an international force to protect Palestinian citizens.

The violence was especially deadly May 14 at the Gaza-Israel border; some 60 Palestinians were killed and hundreds were wounded. Palestinians were commemorating the Nakba — the day Israel was formed in 1948, displacing hundreds of thousands of Palestinians — and protesting the United States moving its embassy in Israel from Tel Aviv to Jerusalem.

The struggles began March 30 with the Great Return March and continued throughout and beyond the six-week event. This led Palestinian, Arab and Muslim groups to call for other countries to become involved in protecting Palestinians. Skynews Arabia reported April 21 that Palestinian Authority President Mahmoud Abbas demanded that Riyad Mansour, the permanent observer of Palestine to the UN, press the UN to protect the Palestinian people.

Moreover, Mansour Al-Otaibi, Kuwait's permanent UN representative, on May 16 urged the UN Security Council to issue a resolution “to provide civilians with international protection." The Organization of Islamic Cooperation (OIC) Extraordinary Islamic Summit Conference in Istanbul on May 18 also called for an international force to be dispatched.

Turkish Foreign Minister Mevlut Cavusoglu said May 22, “The Islamic world has for the first time made a decision. We will send an international force to protect our Palestinian brothers and Jerusalem. After that, Israel won't be able to attack them whenever it wants.”

He added, "We will ensure that Israel is held accountable. … Of course we will do that with the United Nations and the international community."

Mansour said May 15 at a United Nations Security Council emergency meeting that such international protection has become an urgent matter.

Speaking to Al-Monitor on condition of anonymity, a close associate to Abbas said, “Palestinians are currently focusing their efforts on mobilizing support and endorsement for the idea of dispatching an international protection force to the Palestinian territories in general and the Gaza Strip in particular, especially via the [Security Council]. They are also contacting some of the world's decision-makers, such as Moscow, Beijing and Paris, to have them persuade the rest of the countries to approve the idea and discuss the needed details on said force, [such as] the nationalities it will include, the funding, its powers and relations. This is although we are aware of the size of the Israeli opposition to this demand.”

Jonathan Allen, UK deputy permanent representative to the UN, told reporters May 22 in New York that other details also need to be clarified, such as how a force would operate and the potential consequences of its formation.

Danny Danon, Israel's permanent UN representative, warned the Security Council on May 26 against deploying a force to the Gaza Strip, saying it would pose a threat to Israel by bolstering Hamas.

Yahya Moussa, deputy head of Hamas’ parliamentary bloc, told Al-Monitor that Hamas doesn't want to comment on such a force unless one is actually formed — in which case Hamas will consult with other Palestinian factions on how to deal with it. "This is although we believe it would be hard for the Palestinian demand … to be passed, because the UN and [its] Security Council are under the major powers’ control, particularly the United States, which will veto such a step in a way that goes in line with Israel’s desire.”

Hamas appears to have shifted its position on the idea of an international force. In 2014, Hamas opposed any foreign military observer force arranged between Israel and the Palestinian Authority and threatened to attack any such force the same way it would Israeli troops.

The apparent change in approach may show that Hamas is evolving and that its leaders believe an international presence in Gaza would reduce Israel’s control and help ensure that the Gaza Strip obtains some measure of political independence.

Mukhaimer Abu Saada, a political science professor at Al-Azhar University in Gaza City, told Al-Monitor, “The dispatch of an international force should not be limited to the Gaza Strip. Rather, it should include both the West Bank and the Gaza Strip, as limiting it to the Gaza Strip would imply a separation between these parts. Israel could be [especially] against the presence of such a force in the West Bank, as it would restrict its military movement between Palestinian cities.”

A clear vision for an international force is needed, and further diplomatic discussions are anticipated, particularly at the UN. Details need to be worked out, including the nature of such a force's tasks, powers and scope. Without such structure, it's unlikely the UNSC would endorse a resolution and achieve the ultimate goal of protecting Palestinians. However, Israel's recent military escalation could increase the legitimacy and urgency of the Palestinians’ call for international protection.