An anticipated deal between Hamas in the Gaza Strip and Israel appears to be headed south, with Hamas leaders still waiting for a guarantee of economic assistance to Gaza. 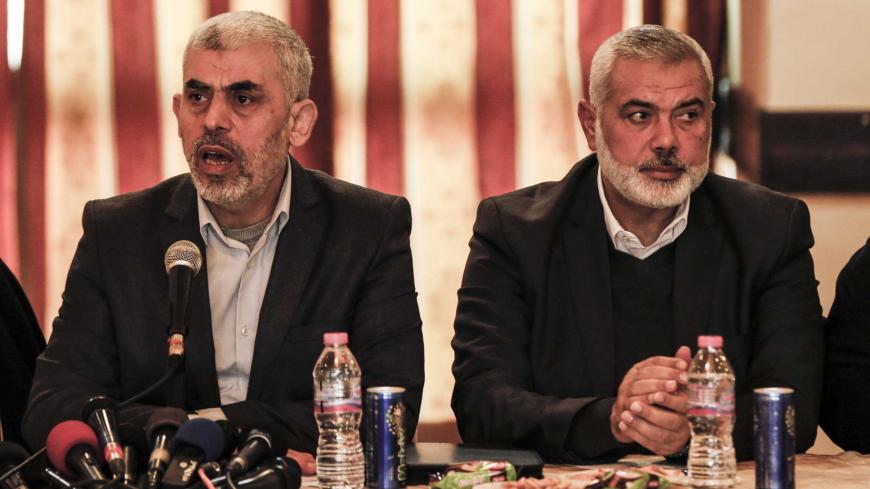 Optimistic assessments by senior Hamas leaders that their arrangement with Israel would soon go into effect were dashed last week. An agreement to ease the siege on the Gaza Strip now seems even farther away than before.

On the eve of Eid al-Adha, Aug. 21, Hamas political bureau leader Ismail Haniyeh had promised Gazans that the siege would soon be lifted. He congratulated them on standing firm against the siege, saying that strength had led them to victory.

Now, other voices are being heard. Hamas leaders are preparing the Palestinian public for news of the arrangement's failure, pointing fingers of blame. As far as Hamas is concerned, the person who bears the brunt of responsibility is Palestinian President Mahmoud Abbas, who is adamantly refusing to even approach the sickbed that is the Gaza Strip.

The movement’s leader in Gaza, Yahya Sinwar, said Sept. 4, “As of now, there is no agreement or even the outline of an agreement with Israel.” He criticized the UN emissary to the Middle East, Nikolay Mladenov, who was very active in discussions between the parties but hasn’t been to the Gaza Strip in the past three weeks.

Meanwhile, at an Aug. 24 meeting in Israel with leaders of the local councils surrounding Gaza, Defense Minister Avigdor Liberman said what was under discussion was not an agreement with Hamas, but rather understandings reached after the 2014 Operation Protective Edge, which included a cease-fire and easing of restrictions at border crossings. He added that he's not involved in any arrangement with Hamas and doesn't support any such agreement. “There is only one arrangement and this is the reality on the ground,” Liberman said. “If there is terrorism, there will be no [economic relief]."

The arrangement's fate has also come into question because Hamas leaders demand clear assurances of a feasible solution to economic crisis. But Hamas knows that without Abbas on board, the plans wouldn't be worth the paper they were written on.

Furthermore, PLO Executive Committee Chairman Saeb Erekat, an Abbas confidant, threatened that if Hamas does sign an agreement with Israel, the Palestinian leadership will impose further sanctions on Hamas. Hamas spokesman Sami Abu Zuhri responded to Erekat, “All that these threats show is how determined Fatah is to strangle the Gaza Strip.”

A political source in Hamas told Al-Monitor on condition of anonymity, “There’s talk and promises. People toss out numbers. Still, nobody knows how serious it really is.” According to him, the promises come primarily from UN emissary Mladenov, who claims he was able to raise hundreds of millions of dollars for Gaza relief. The problem is, the source continued, “that until now, no one has known if it’s true, [but] the money really will begin to flow to projects in Gaza.” During talks, the Egyptians mediating the deal had presented Hamas representatives with all sorts of potential economic programs based on promises by the administration of US President Donald Trump. But, as with anything to do with Trump, Hamas leaders can’t be sure they can rely on these promises.

Another serious concern also is adding to Hamas leaders' worries about the future. Late last week, on Sept. 1, the United States announced it is stopping all aid to the UN Relief and Works Agency for Palestinian Refugees (UNRWA). In other words, the main source of aid to residents of the Gaza Strip is about to be eliminated. Despite condemnation by EU leaders, almost no European nation promised to provide UNRWA with replacement funds. However, the UK did announce this week that it will step up its support of UNRWA.

In response to the dramatic American decision, Abu Zuhri pointed a finger at Israel. “The fact that [Prime Minister Benjamin] Netanyahu congratulated the US for its actions against UNRWA proves that this is really an Israeli decision with American cover,” he said. He went on to threaten, “Israel will bear responsibility for its implications."

Given this situation, when it's obvious to Hamas that economic conditions in the Gaza Strip could get much worse, there is no way Hamas leaders will knowingly tie their own hands with an agreement with Israel.

At the same time, the source said, Israel has conditions of its own for this arrangement, particularly the return of its fallen soldiers’ remains, as well as the two Israeli citizens being held by Hamas. So far, Sinwar has insisted on keeping the arrangement separate from an agreement over the prisoners, even if it means that the deal might collapse. On the other hand, in an Aug. 30 talk with reporters in Gaza, Sinwar acknowledged the possibility that progress might soon be made on returning the Israeli civilians and soldiers’ remains held in Gaza in exchange for Israeli releasing Palestinian prisoners.

Hamas must realize that this insistence obligates it to make progress on the prisoner issue first.

There is a dispute between the Israeli political and military leadership about whether the government should insist on the return of the soldiers’ remains and the two civilians. A statement released Sept. 4 by the Israel Defense Forces said the IDF has intelligence confirming that the two civilians, Avera Mengistu and Hisham al-Sayed, are alive in Hamas' custody. In an unusual step, the IDF also said it believes it would be wrong to include the issue in the initial part of the arrangement in Gaza and that the issue should be postponed to a later stage.

But while the IDF is reworking its assessments to prevent an armed conflict with Hamas, the political leadership is still subject to the pressure of the Israeli public. Netanyahu recently sustained a harsh attack from the families of soldiers Hadar Goldin and Oron Shaul,  which was immediately followed by a report that Netanyahu’s wife, Sara, had called Leah Goldin, Hadar’s mother, “ungrateful” in a phone call to the bereaved mother two years ago. The Netanyahu family denied these allegations. It's entirely conceivable that the comments were leaked to the media to pressure the prime minister and expand the circle of people on the Israeli right (the source of Netanyahu’s strength) that oppose the economic arrangement. For the moment, it looks like this tactic has worked. The pressure is taking its toll and the arrangement with Hamas is now on hold — at least until the next blowup.