Israeli diplomats claim that the UNRWA’s mandate must be revised so that the issue of Palestinian refugees will include only the generation that really lost its home. 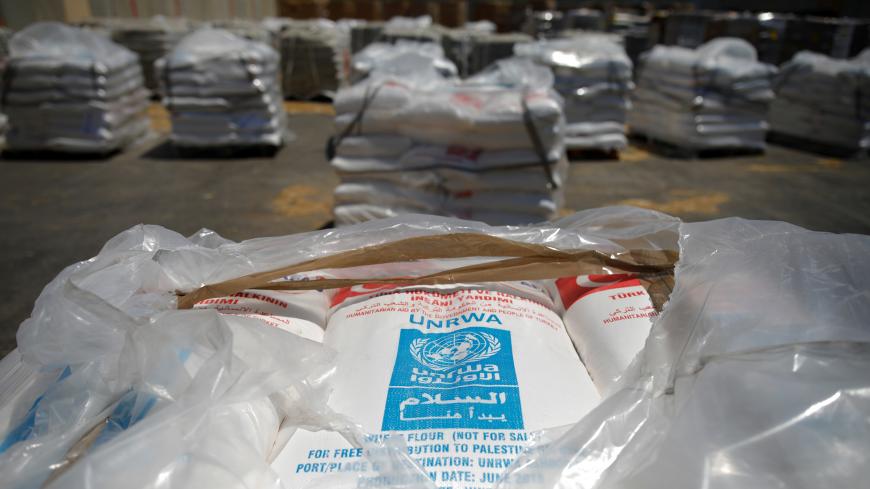 Bags containing aid from the UN Relief and Works Agency (UNRWA) are seen ahead of their transfer to the Gaza Strip, inside the Kerem Shalom border crossing terminal between Israel and Gaza Strip, Aug. 15, 2018. - REUTERS/Amir Cohen

In the words of President Donald Trump, the (symbolic) transfer of the American Embassy from Tel Aviv to Jerusalem served to take the Jerusalem problem “off the table.” Trump put a checkmark next to the Jerusalem issue, a conundrum that has cast a shadow on anyone who tried to mediate between Israel and the Palestinians ever since the 1993 Oslo Accord. Now, it seems, Trump is also removing the Palestinian refugee problem from the agenda. This is an issue that the Palestinian narrative views as central and imperative, even more than Jerusalem.

How is Trump accomplishing this? In his own way: The American administration stops recognizing the approximately 5 million Palestinian refugees listed by the United Nations Relief and Works Agency (UNRWA), which is charged with aiding them. From now on, only those who were de facto refugees in 1948 will be considered refugees today. It was in 1948 that the Arab countries attacked Israel immediately after the State of Israel was declared, which resulted in the “Nakba’’ ("catastrophe" in Arabic) — the great Palestinian defeat. Hundreds of thousands of Palestinians fled or were expelled from the territories of the Jewish state in the making to cities of refuge across the entire area. Simultaneously with this dramatic change of policy, the United States is making a sharp cutback of about $200 million in the monetary aid it gives the Palestinians. This constitutes a declaration of war on the way the UN has functioned over the last 70 years to empower and perpetuate the problem of the Palestinian refugees instead of acting to resolve it.

Al-Monitor reviewed in an earlier article the issue of cutbacks in the UNRWA budget. Meanwhile, it turns out that the American course of action will be sharper and more aggressive than was originally assessed in Israel. The watershed will be breached on Sept. 1, exactly when hundreds of schools in Gaza and the West Bank operated by the UNRWA are due to open. The Israel Defense Forces (IDF) and the Shin Bet warn that UNRWA cutbacks are likely to cause the security situation to deteriorate unless an alternate program is presented.

“When Sept. 1 rolls around and hundreds of thousands of young pupils remain on the streets without a solution, this will create negative energies and greatly undermine stability,” a high-level Israeli security source told Al-Monitor on condition of anonymity about two weeks ago. Now the assessment is that the sharp cutback in aid will also negatively affect current efforts to reach an arrangement between Hamas and Israel in the Strip. “In Gaza,” explains an Israeli security source to Al-Monitor (speaking on condition of anonymity), “UNRWA not only takes care of education, health and welfare, but also feeds tens of thousands of families of refugees who have no independent economic existence apart from this assistance. If all this will be rolled back, we are likely to find ourselves in a real crisis.”

From Israel’s point of view, the new American policy is a dream come true. The Trump administration has fully adopted the Israeli stance, which is not devoid of logic and is backed up by facts. The person who led the public campaign against the UNRWA was Ron Prosor, the much-esteemed former Israeli ambassador to London and the UN.

“UNRWA is an organization that — instead of solving the refugee problem — perpetuates it,” Prosor told Al-Monitor. “The UN already has an organization dealing with refugees around the world [UNHCR] but the Palestinian refugees are excluded from it, and they have their own agency. The numbers that UNRWA disseminates have no connection to reality. In Lebanon, 200,000 refugees 'disappeared' from the number that UNRWA reports. The refugee status has become hereditary and transferred from parents to children for four generations — from father to son to grandson to great-grandson. Hundreds of thousands of refugees are scattered around the world who have not been relevant already for a long time, but their refugee status is written in stone. All this is designed to perpetuate the problem, not solve it,” the ambassador said.

Prosor does not blink at the warnings of the Israeli security system regarding the dangers of this change. “The security system has automatically supported UNRWA for all these years out of short-range vision. No one wants the change to take place on his watch. Everyone is afraid of the ramifications, and no one considers the strategic angle. If I was Coordinator of Government Activities in the Territories, I also wouldn’t want to rock an already leaking boat. I’d be happy that someone else would continue to feed and take care of this enormous elephant sitting in the middle of our living room. The time has come to state the truth. The refugees should be rehabilitated. There are no more than half a million refugees from 1948. All the rest are hitchhikers getting a free ride; it is about time that they rehabilitate themselves in the places they live.”

Prosor’s criticism of the security system multiplies when we talk to right-wing ministers. These ministers reject the automatic stance of the IDF and the Shin Bet, which are against bringing down the UNRWA without an alternative means of support for the Palestinians.

The one person who has not opened his mouth on this issue is Prime Minister Benjamin Netanyahu. Usually, Netanyahu adopts positions identified with the right in the speed of light, and these positions become part of his continuous campaign for the right-wing vote. But this time, Netanyahu is keeping silent. He knows that the army’s warnings can materialize and then he would be viewed as the one who fanned the fires and encouraged the Americans to take that gamble. Therefore, before he jumps on the victory bandwagon, he wants to make sure that the bandwagon won’t go up in flames.

Prosor explains that examination of the refugee issue began a while back, during the Obama administration. “There was a classified report in the State Department on the real number of refugees; it was discovered that we are talking about 10% of the number reported by UNRWA,” Prosor told Al-Monitor. “When the administration changed, the classified status of the report was revoked and parts of it were publicized. At the end of the day, we are talking about something that, instead of disappearing over time, continues to swell up in front of our eyes. UNRWA has become a monster employing tens of thousands of people in order to perpetuate a whole industry. This makes any attempt to discuss a solution to the Israeli-Palestinian conflict impossible.”

According to Prosor, treatment of the Palestinian refugees must be transferred to the UN’s professional agency that deals with all of the world’s refugees. Prosor says that the world should stop recognizing generations of Palestinian refugees but only recognize the original ones. There is no reason to take care of refugees who, for example, became citizens of Jordan, or those living under the Palestinian Authority, which should take care of their own people. In this way, says Prosor, the “refugee problem” will return to its real dimensions and thus be open to a doable, logical solution.

Until that happens, Israel continues to cultivate hopes regarding Trump. When the president announced Aug. 23 that now it’s the Palestinians’ turn to "get something very good" in return for the embassy move, it did not generate much worry in Jerusalem. If Trump resolved the refugee issue and the Jerusalem issue so elegantly, jokes a high-placed Likud minister, then all that remains is for Israelis to hope that he will revoke his recognition of the Palestinian people. This would surely resolve the Palestinian problem itself.

Correction: Aug. 28, 2018. An earlier version of this article stated that the United States is making a cutback of about $200 million in the monetary aid to UNRWA. Rather, it is making this cutback in aid to the Palestinians.