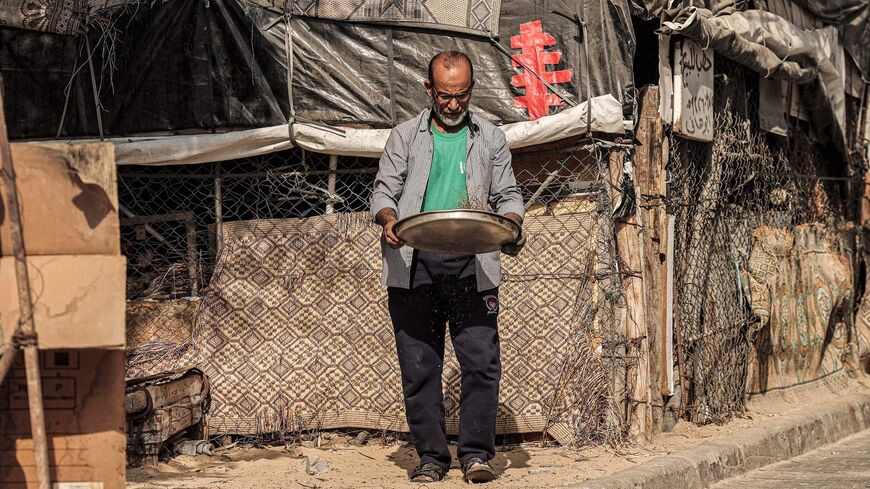 A man holds a tray as he shakes wheat kernels outside a home at the Rafah camp for Palestinian refugees in the southern Gaza Strip on Nov. 16, 2021. - SAID KHATIB/AFP via Getty Images

“We Want to Live” is a popular movement that began in March 2019 with social media calls for peaceful demonstrations over the difficult economic conditions and the high unemployment rates in Gaza. The demonstrations, which evolved into strikes, mass civil disobedience and camping on the streets of Gaza, were heavily repressed by Hamas security forces, who arrested dozens of demonstrators.

After the drowning deaths of Gazan migrants off the Greek coast on Nov. 6, the “We Want to Live” movement resurfaced to demand a decent life for Gazans.

In a Nov. 21 statement, the movement announced it would continue to protest the high cost of living and demand economic and social rights in Gaza. “The increase in prices is emptying our pockets amid illegal and inhumane taxes and tolls that the de facto government is taking by force from merchants, suppliers, companies and businessmen in the Gaza Strip,” it read.

The hashtag “We want to live” went viral on social media as dozens of users expressed their anger over the living conditions in Gaza.

Twitter user "Uncle Hassan" tweeted Nov. 25, “We Gazans want an open country like in the old days to be able to work in the West Bank and Israel. Our youth have become fish food during their emigration from Gaza in search of a decent life.”

On Nov. 24, the “We Want to Live” Twitter account posted a video of a young man from Gaza appealing to the Hamas leadership to provide a decent life and a home for his homeless family.

“Enough is enough! Why should my children suffer from homelessness? They would be better off dead,” he said.

Protest coordinator Azmi al-Shuyukhi told Al-Monitor, “We tell the lords of palaces and hotels and the ruling sultans in Gaza that the revolution of the hungry in Gaza may explode at any moment, like a volcano.”

He said no date has been set yet for the protests, “but it will be very soon.” He went on, “This revolution will be against the de facto government in Gaza and in rejection of its extensive taxes and lack of job opportunities. This government has starved, humiliated and robbed people of their ability to provide for their children.”

He explained that the taxes have raised the prices of basic commodities. The price of a kilo of lentils in the Gaza Strip rose from four shekels ($1.20) to seven shekels ($2.20) and a 50-kilo bag of sugar rose from 100 shekels ($31.50) to 130 shekels ($41). The prices of legumes, rice, cooking oil, flour, eggs, cheese and coffee have all increased.

Shuyukhi stressed the need to “get rid of all the impediments that Hamas places on the work of the Palestinian government in Ramallah, led by Prime Minister Mohammad Shtayyeh, to freely carry out its governmental role in the Gaza Strip, as it has the mandate to rule.”

During a visit by a delegation of 20 ambassadors and representatives of EU countries to the Gaza Strip on Nov. 25, the movement appealed to the delegation to intervene to reduce taxes in Gaza.

Shuyukhi said in a Nov. 25 statement addressed to representatives of the European Union, “Citizens in the Gaza Strip hope that the delegation’s visit will [produce measures to] save our collapsed national economy and alleviate the suffering of citizens,” adding that the poverty rate in Gaza has passed 80% and unemployment has reached 60%.

The statement attributed the dire situation to the Palestinian division since 2007 “and the de facto government’s interference and obstruction of the work of the Palestinian government in Ramallah in implementing its full official and governmental role in Gaza.”

Human rights activist Moumen ALnatour told Al-Monitor that the “We want to live” movement voices the concerns of an entire Gazan population that was forced to live under a political regime that is indifferent to the concerns and suffering of the people.

Natour, who was repeatedly arrested by Hamas security forces while monitoring human rights violations in Gaza, stressed that the repeated calls for new protests against Hamas policies in Gaza were a natural result of the pressures there. “What is also expected is for the Hamas security services to respond with repression, violence, arrest and accusations of collaborating with Israel and committing acts of national treason.”

He explained that the movement’s demands of reducing taxes and providing job opportunities for young people are reasonable and just.

A Hamas security source told Al-Monitor on condition of anonymity that the movement’s security forces are preparing to deal with the outbreak of popular protests.

“These protests are driven by foreign parties and these parties are seeking to destabilize the Gaza Strip. We have thwarted several calls for such protests over the past days,” the source said.

“These parties take advantage of any local or international event to turn citizens against Hamas, such as the drowning incidents of Palestinian immigrants and the global rise in food prices, as they mislead citizens that Hamas is the reason behind them,” he added.

The source stressed that the movement’s security apparatus “is able to control with minimal damage any events or demonstrations that may emerge on the ground.”

On Nov. 10, the Hamas website Palestine Online published a report claiming the “We Want to Live” movement was established by the Shin Bet to incite the citizens of the Gaza Strip against the Palestinian resistance.