Hamas' call for more taxes gets Gazans fired up

Gazans are questioning Hamas’ decision to impose additional taxes, as they are still plagued by poverty, unemployment and insecurity, with no plans for development on the horizon. 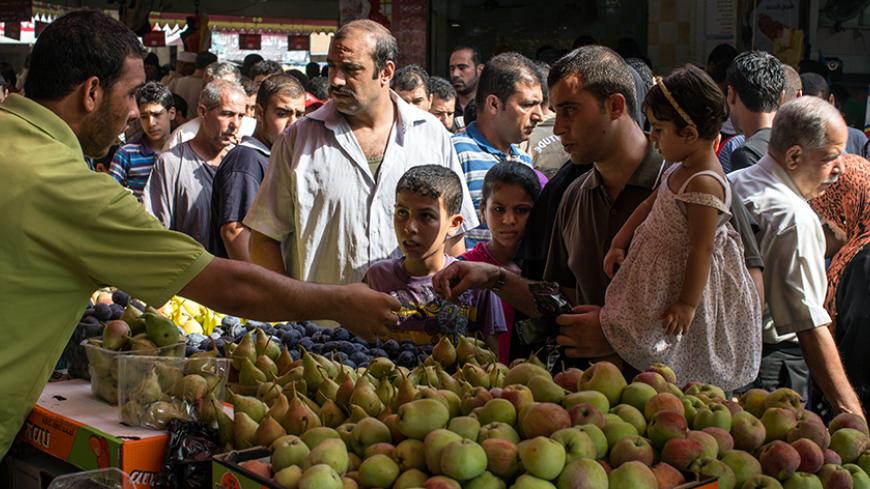 GAZA CITY, Gaza Strip — Amid ongoing economic deterioration in the Gaza Strip, the Hamas government has imposed new taxes on the population. In addition to siege and division, the government and its employees are struggling to weather the financial crisis and increased isolation resulting from the destruction of the smuggling tunnels.

On Dec. 1, the Finance Ministry instituted new import taxes on some goods, including fruits, vegetables and livestock entering Gaza through the Karam Abu Salem commercial crossing in addition to new taxes on shops, restaurants and bakeries. Several merchants and shop owners confirmed to Al-Monitor that the Finance Ministry had imposed an import taxes equivalent to a $30 tariff on each ton of fruit, $50 on each calf and $15 on each sheep. The new taxes have angered business owners, leading some to close their shops in protest during certain hours. Other merchants have threatened to halt imports of fruit and livestock until the government revokes what they see as unfair burdens.

Atef Adwan, head of the Gaza-based Economic Committee of the Palestinian Legislative Council, told Al-Monitor, “The new taxes are intended to cover government expenditures, which is normal. The financial crisis facing the government in Gaza and the lack of funds forced it to rely on those who owe taxes to the government. ... People these days are confusing the taxes they pay with the bills they owe in return for the services provided.”

Adwan's assertion contradicts the view expressed by Hamas parliamentarian Ahmad Abu Halabiya in an interview with Mashriq News. He said that Gaza PLC members who met April 18, 2015, with no Fatah lawmakers present, ratified the “solidarity tax.” The law imposes additional sales taxes ranging between 1% and 10% on items deemed “luxury” goods in Gaza in light of the excruciating poverty, such as fruits, cigarettes, livestock and new cars.

Al-Monitor interviewed Gazans who said residents cannot bear additional taxes amid the deteriorating economic situation, including rising poverty, unemployment and declining purchasing power. They are victims of the new taxes because they have been paying double the price for goods after merchants raised prices following the new tax hikes. Hamas parliament member Jamal Nassar agreed, arguing that the real victims are the citizens, not the merchants.

Aouni al-Basha, assistant undersecretary at the Ministry of Finance, told Al-Monitor, “The [Gaza Finance Ministry], in collecting the taxes, refers to a number of laws in force, such as Income Tax Act no. 17 of 2004, passed by the PLC ..., Customs Act no. 1 of 1962 and VAT Act no. 6 of 1994. These old and the newly imposed taxes are only used to pay the salaries of the Gaza government employees who were appointed after the [2007 Palestinian split] and whom the Ramallah government refuses to recognize.” Hamas wrested control of Gaza from Fatah and the Palestinian Authority (PA) in 2007.

A Fatah official from Gaza told Al-Monitor on condition of anonymity, “The [import] tax collection in Gaza violates the applicable Palestinian tax law in Gaza and the West Bank.Tax collection is supposed to be spent on the services offered to the citizens in Gaza, whereas there are no services in Gaza. Thus, tax collection in Gaza is not transparent, as the aim is to entrench Hamas’ rule over the Strip and spend the tax money on the movement’s employees and their agendas.”

Atallah Abu Moussa, a lawyer and head of the Justice for Rights and Community Empowerment Association, told Al-Monitor, “The relevant ministry files a lawsuit ... against anyone neglecting to pay taxes. The ministry protects the public's rights. If the person neglecting to pay the taxes has a registered business, its registration deposit is forfeited and the accumulated taxes are deducted from it.” He also said, “If the person is not registered, the public prosecutor considers him a tax evader, and some of his properties are confiscated until he settles his legal status. Otherwise, he will be jailed.”

In 2008, PA President Mahmoud Abbas issued a decree, from Ramallah, amending the tax law to exempt Gazans from income taxes. The Hamas government, however, did not implement the amendment, considering it a political decision without authority and in conflict with the Income Tax Act.

Jamil Mezher, a member of the Popular Front for the Liberation of Palestine’s political bureau, told Al-Monitor, “I can’t see the legal basis for the taxes collected by Gaza’s de facto government by force and in the absence of transparency in the spending [process], as the tax money is disbursed to [Hamas] employees who have been appointed since the 2007 division.”

Taxes are supposed to be spent on services, which is not happening in Gaza, Mezher asserted, adding, “The new taxes will exacerbate the people’s difficult living conditions as they are already plagued by poverty and unemployment.” Mezher stressed the need to “end this in order to alleviate their suffering and give the consensus government an opportunity to provide for the people in the Gaza Strip.”

Mazen al-Ajala, an economic researcher and lecturer at al-Azhar University in Gaza, also disagreed with the imposition of new taxes. He told Al-Monitor, “In case of an economic recession, no taxes should be imposed, as it would add to the people’s suffering.” He further explained, “In the case of Gaza, the situation is extremely serious, because of the increasing tax rates in light of the severe economic recession, in addition to a 14% decrease of the gross domestic product. This is while the recurring aggressions on the Strip call for immediate help to the affected and homeless. The taxes, however, seem to worsen the situation in Gaza in light of a peaking unemployment rate of 43% while 40% of its population are living below the poverty line. Meanwhile, merchants and citizens continue to complain about the [economic] stagnation and the drop in sales.”​

Ajala charged, “Unfortunately, those controlling Gaza do not care about the citizens’ interests and the economy.”

Samir Abu Mudallala, an economics professor at Al-Azhar University, echoed Ajala's assessment. In a March 19 statement to Kofia Press, Mudallala said, “Forcing new taxes on the Gaza Strip is a form of economic piracy and may worsen the current economic situation. It will also deepen the people’s scourges and increase poverty rates and food insecurity.”

In an interview with Al-Monitor, Fatah parliament member Ahmad Abu Holi also criticized the taxes. “The tax laws discussed by the PLC in Gaza amid the lack of a quorum were illogical,” he said. “They only aim at raising tax rates and should not be subject to political disagreements or divisions. Any additional taxes or hikes will result in inflation due to political and security instability and the low salary scale.”

Thus, as the political division between Hamas and Fatah continues, the suffering among Gazans continues and grows ever deeper.