Life as a Gaza street vendor

Owners of small businesses in Gaza are already struggling to make ends meet, and the fines and taxes they are required to pay are adding to their difficulties. 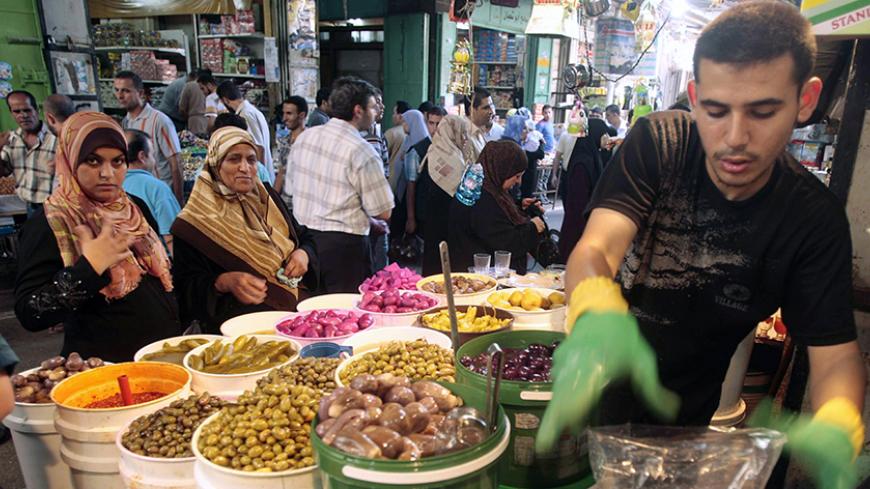 GAZA CITY, Gaza Strip — Thousands of unemployed in the Gaza Strip wait for the summer season to get their small projects up and running to support their families in light of the continuing economic downturn. These projects include the sale of boiled corn and summer fruits on small carts, moving between markets and beaches. The owners of these projects, who are trying to fight poverty and unemployment, usually face several types of harassment by local authorities, most notably the latter’s imposition and collection of taxes.

Economist Mohsen Abu Ramadan believes the spread of street carts and vendors is a natural phenomenon resulting from economic deterioration, increasing poverty and unemployment rates, accumulation of university graduates, the Israeli blockade and repeated wars. “The economic situation in Gaza does not give the breadwinner the opportunity to find a job to protect his family from [the need to] beg. Therefore, he would work at any job to support his family,” Abu Ramadan told Al-Monitor.

Abu Mohammed Mekdad, 42, who worked at a concrete factory that was destroyed in Israel’s last war on Gaza, was forced to borrow some money from relatives to buy a cart to sell fruit in the Sheikh Radwan neighborhood in northern Gaza City to provide for his family that was displaced by the war. “Police cars are always on our tail, claiming that our work is illegal and unauthorized. Each time they confiscate our weighing scale and the cart’s umbrella and we can only get those back by paying a fine of 40 shekels (about $10),” he told Al-Monitor.

Mohammed Abu Dalfa, a 27-year-old fruit vendor, said, “Police raids have increased recently. They used to occur once a month, but during the past few months they are repeated three or four times [a month].” Abu Dalfa grudgingly added, “These raids aim only at imposing and collecting fines.”

He pointed out that the vendors are each time forced to go to the police station and pay the fine to recover the confiscated items. “If the vendor fails to pay the fine within one month, the items are permanently confiscated and sold at auction as spare junk,” Abu Dalfa said.

He indignantly indicated that instead of being concerned with improving water, electricity and sanitation services to citizens, local authorities are preoccupied with raising money from taxes and fines.

The poverty rate in the Gaza Strip stood at 65% as of the fourth quarter of 2014, according to the Palestinian Central Bureau of Statistics.

Two blocks from Sheikh Radwan neighborhood, Khoder al-Iff, 19, stands on the corner of the street holding a box containing packets of cigarettes. He fears his goods will be confiscated. He reaps profits from the sale of cigarettes for 30 shekels a day (about $8) and this is the only source of livelihood for his family of four.

“The police are after us in an arbitrary manner. Sometimes they chase us and sometimes they let us go," he said. "If they arrest us they confiscate our goods.”

The police in Gaza decided April 6 to prevent street vendors from selling cigarettes on main and secondary streets. The Interior Ministry website said this decision aims at reducing the prevalence of smoking among those younger than 18.

Iff questioned the credibility of these claims and sarcastically said, “If the [Interior Ministry’s] arguments were true, why did the police allow shops to sell cigarettes to people of all ages without any impediments?”

Ahmed Abu Assi, 25, built a cart for selling boiled corn on the beach of Gaza, which is the entertainment escape for Gazans during summer. He was shocked that at the end of April, officials from the Municipality of Gaza destroyed his cart following skirmishes between him and municipality employees, claiming that it was illegal.

“The building of this cart, which I called ‘Roots al-Glaba’ [luxury for the poor people], cost me 550 shekels [about $140], but I was surprised that officials from Gaza’s municipality destroyed it, allegedly claiming its illegality despite the existence of dozens of other carts on the beach,” Abu Assi told Al-Monitor.

Social media activists started the hashtag #Roots_algalaba on Facebook in solidarity with him. Some of them collected money and rebuilt the corn cart in a move that gained great popularity.

The Palestinian News and Info Agency (WAFA) cited a World Bank report saying unemployment in the Gaza Strip is the highest in the world, reaching 43% at the end of 2014.

The May 22 article's quoted the report: “Gaza’s economic performance over this period has been roughly 250% worse than that of any relevant comparators including that of the West Bank. ... Real per capita income is 31% lower in Gaza than it was 20 years ago. ... GDP losses caused by the blockade [are] estimated at over 50%.”

For Abu Ramadan, it's extremely unfair to impose taxes on these vendors; rather, they must be given support and commercial facilities and legislation must be issued to facilitate their life instead of complicating it.

He said Hamas is suffering from a financial crisis because of the closure of tunnels and the drained external financial support sources that forced it to impose taxes on citizens to obtain money.

“The tax imposition policy adopted by Hamas, most notably the Solidarity Tax law, cannot be applied onto a society like the Palestinian society in Gaza, which has been suffering from living, political and economic instability for years,” Abu Ramadan said.

The Ministry of Economy in Gaza’s government had announced in October 2013 that the closure of tunnels caused losses estimated at $230 million a month.

According to Hamas leader Yahya Moussa, about $9 million in taxes were being reaped every month in the Gaza Strip before the imposition of the Solidarity Tax law, while local authorities need $40 million per month to manage governmental institutions and ministries.

Street vendors are calling on the local authorities to provide decent jobs that could help vendors face unemployment and poverty — instead of imposing taxes.