The Gaza Strip tries to maintain its own culture, even as the blockade forces it to embrace imports. 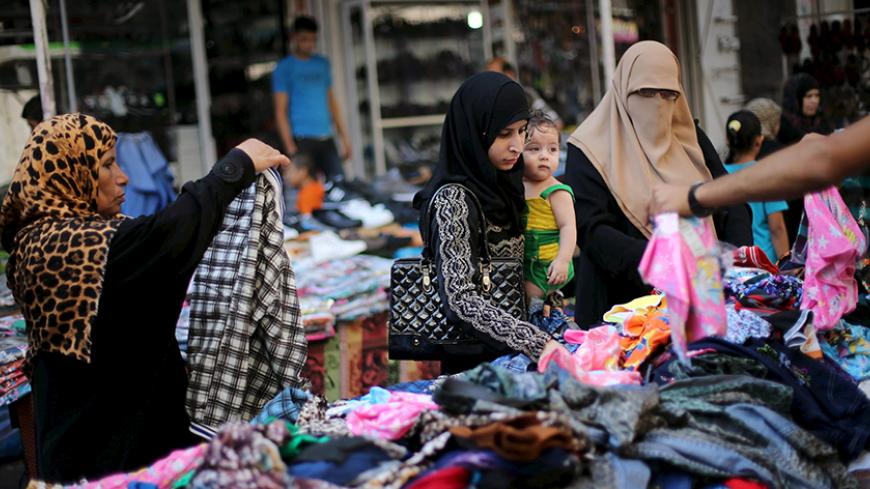 Palestinians shop in a clothing market before the end of Ramadan in the central Gaza Strip, July 16, 2015. - REUTERS/Ibraheem Abu Mustafa

GAZA CITY, Gaza Strip — The nine-year siege on the Gaza Strip has caused Gaza City to resemble anything but its old self. One can find Egyptian, Turkish, Israeli and Chinese cultural and commercial products — but rarely Palestinian products from either Gaza or the West Bank.

The siege, occupation and Islamic rule have altered Gaza City’s true character culturally and economically, but experts assert that these effects are not radical or permanent.

The Egyptian culture is a major influence. Since the blockade was imposed on Gaza in 2006, more than 2,000 smuggling tunnels have been dug between Egypt and Rafah in the southern Gaza Strip. Though the Egyptian army has closed most of the tunnels now, they were widely used, making Rafah Gaza’s window to the world.

Al-Tali’ah, a 70-year-old bookstore, is in Palestine Square, one of Gaza City’s largest markets. The store sells Egyptian novels such as "The Future File," "Beyond Nature" and "Flowers," by prominent Egyptian authors such as Nabil Farouk, as well as Egyptian paperback novels that were popular in the mid-1980s.

The store's shelves are stacked with hundreds of audiocassettes of Egyptian Quranic reciters such as Abdul Basit Abdus Samad. Facing those shelves are tapes of old Egyptian films, mostly featuring Egyptian actor Adel Imam. In the bookstore, it feels as if time has stopped because everything is so old.

“We have not had new novels and books in the shop for more than two years" said Haitham al-Wahidi, who runs the bookstore. "We used to sell more than 30 films and novels a day, but [almost] nothing today.”

Books by Gazan authors are almost absent because of the blockade and the high cost of paper for local presses. Local feature films are also absent. Artistic and cultural pieces are almost completely missing.

Near the bookstore, Nour Abu Assi sells fresh juice in a decorated cart that roves around. He told Al-Monitor, “I saw similar carts that sell ice cream and juice in Egyptian films and Turkish series, so I thought, why not do the same? The [idea] succeeded even though the cart is not intended for juice but for transporting merchandise.”

Gaza’s streets have vendor carts selling sandwiches, coffee, tea and boiled corn in cups, as the products cost little and are in high demand. Atta al-Ghandour sells boiled corn, adding salt and lemon. He told Al-Monitor, “The idea came to me while watching scenes of street vendors on the Nile Corniche in Egyptian films. But of course my main motivation was not to imitate, but because of poverty.”

The influence of Egyptian culture is mainly due to the Gaza Strip being connected to Egypt historically, according to social specialist Zahia al-Qara. Egypt, the closest neighbor, ruled the Gaza Strip administratively between 1948 and 1967.

“Gaza has always been more open to Egypt than to northern Palestine or the West Bank, since Israel separated the Gaza Strip and the West Bank and closed the roads between them with military checkpoints,” she told Al-Monitor.

In times of crisis, like during the current blockade, people invoke other cultures to distract them from their problems.

“In this case, we find that they [Gazans] took from Egypt the culture of poverty and the subsequent emergence of certain behaviors, such as social castes and pushcarts selling juice or corn,” Qara said.

About Egyptian books and films, she said, “The educated middle class in Gaza studied in accordance with the Egyptian curriculum, read Egyptian novels and was the first to watch black-and-white Egyptian films.”

This absence of cultural and creative identities is contrary to the Strategic Plan for Culture and Heritage (2014-16), published in 2013 by the Palestinian Ministry of Culture. The plan has two main objectives: to enable Palestinian culture to contribute to a pluralistic national culture to strengthen unity, and to protect and renew Palestinians' cultural heritage. This plan can be achieved by collecting and archiving stories, proverbs, tales, legends, oral history and manuscripts, and raising awareness of the value of heritage.

Gazans also take their fashion cues from other cultures.

Abu Ahmed Mushtaha, a Gaza City clothing store owner, told Al-Monitor, “I have fashion [items] from Turkey, China and Israel. All come through the commercial crossings. But I have no goods from the West Bank or Gaza. The best-selling fashion is Turkish, whether for veiled women or others.”

The area's Omar Mukhtar Street looks almost like the fashion stores in Istanbul's Taksim Square, especially since many young men have Turkish beards, which has become a trend among the youth: They grow their beards and get short haircuts. As for the Turkish hijab trend, it consists of covering the hair completely and tying the veil from behind, unlike the traditional way of tying it from the front.

But Turkish fashion does not detract from the impact of Egyptian culture. The popular Koshari al-Nile store in Gaza City sells the famous Egyptian dish Koshari, which is made up of pasta, rice, lentils and sauce, and topped with fried onions.

Koshari's owner, Osama Hassan, told Al-Monitor, “I opened my store Koshari in the central province in Nuseirat and in Gaza City. Both stores succeeded because most people here either studied in Egypt or lived there. All have memories [from Egypt] and like to recall them by eating Koshari.”

Qara feels the Egyptian effect is superficial, not deep-rooted. “Throughout history, the Gaza Strip was always a corridor for various civilizations and commercial convoys. But it was always resistant to change, similar to the minorities who hold on to their identities in the face of change. Gaza continues to resist whatever may change its identity, whether this change comes from Egypt, Turkey or Saudi Arabia.”

Political writer Ibrahim Abrash wrote in his study “The Problem of Culture and Intellectuals in Palestine,” published in October 2015, that there is a lack of a specific culture and national identity in the Gaza Strip for several reasons, the most significant being “the wars waged by the Israeli occupation against the Strip, wars that devastated everything.”

The study also blames Hamas, which "hides its failure as a political authority by wearing a religious cloak and pushing toward fake religiosity, which rejects creativity."

The store feels like an old mansion. There are various copperplates: mirror frames, large lamps, some artifacts made of Indian ivory and Thai rugs. But there is barely a Palestinian product. It is as if this small city, which cannot travel to the outside world because of the blockade, has decided to bring the world to it and place it on store shelves.