Although ice cream is popular among Palestinians in the Gaza Strip, local ice cream shops struggle to sustain themselves under Israel's blockade and Hamas' law on imported goods. 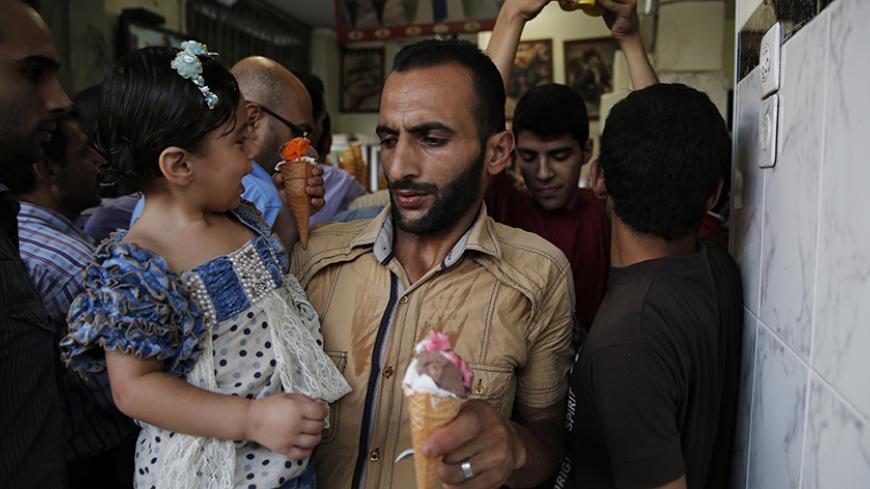 GAZA CITY, Gaza Strip — Ice cream is a popular treat for Gazans, who are suffering from the emotional stress of the deteriorating political and economic situation, especially since 2007, and who are facing another summer with intense heat. They consume locally produced ice cream at ice cream parlors or eat factory-produced ice cream sold in grocery stores across the Gaza Strip.

Kazem's ice cream parlor in the heart of Gaza City has borne witness over the last 65 years to the Palestinian heritage of locally produced Arabic- and Western-style ice cream.

Hajj Abu Kazem Abu Shaaban told Al-Monitor the story of Kazem's ice cream parlor, which his father, Kazem Abu Shaaban, established in 1950 and developed into a distinctive commercial brand thanks to its recipes that have enchanted Gazans. Regardless of their social status, residents from all over Gaza flock to the shop where the elder Kazem worked hard to develop the ice cream production industry until his death in December 2010.

“My father began producing ice cream at his grocery store in 1950, where it was prepared manually," said Abu Shaaban, who inherited the ice cream parlor from his father. "He subsequently installed primitive plastic cooling tubs, until the business gradually evolved and we began, almost 20 years ago, to use Italian-made machines that produce ice cream. [We would like to think of the ice cream parlor as] belonging to all Gazans. It is comprised of two floors: the ground floor that houses simple items, affordable to all, irrespective of their financial means, and where prices range from 1 to 2 shekels [25 to 50 cents]; and the second floor where the Ice Cafe is located. Here various types of ice cream are sold to the middle and upper classes. The second floor overlooks the most lively street in Gaza and the cafe offers types of ice cream that are not available on the first floor.”

Concerning the evolution of ice cream flavors, Abu Shaaban said, “To judge the quality of ice cream, one must refer to its primary flavor, vanilla, the recipe of which remains our own guarded secret. We later added more flavors, such as strawberry, mango, apple and lemon, and Arabic ice cream made from vanilla mixed with nuts and pistachios. We subsequently expanded beyond the production of Arabic ice cream and became authorized agents for Italy’s Mec3, which supplies us with new flavors allowing us to produce more than 30 types of ice cream at international standards, such as cookies and cream, Snickers, Kinder Bueno, Raffaello, damask rose and others that are offered on the second floor. We also took part in Arab and international ice cream-making seminars in Egypt, Jordan and Israel, among others, sponsored by Mec3, which allowed us to become the first Gazan company to produce crepes, waffles, Nutella ice cakes and natural fruit yogurt.”

Ice cream parlors are widely scattered across the Gaza Strip: Abu Zeitoun Refreshments is the most famous in northern Gaza, with the Hamada for Ice Cream and Cakes being the most prominent in the central area and Rumaneh Refreshments taking top honors in the south. Yet, Kazem's ice cream parlor remains the favored destination for Gazans, who flock there from all areas to eat ice cream.

Abeer sat with her fiance in Kazem’s Ice Cafe and told Al-Monitor, “I asked my fiance to bring me to Kazem’s. We came here from Khan Yunis because eating ice cream in Gaza is a very special experience. The food and atmosphere are beautiful, complemented by a stroll through the al-Rammal neighborhood in the center of town.”

According to the Palestinian Federation of Industries, there are five ice cream factories in Palestine, which are producing ice cream that is a popular alternative to the ice cream sold at ice cream parlors. They distribute ice cream to grocery stores and supermarkets, at prices not exceeding 1 shekel.

Workers at the al-Aroosa ice cream factory during a morning, making the product that will be sent to supermarkets and shops, May 4, 2015. (photo by Mohammed Nehro)

In the busy Zamroun neighborhood, east of Gaza City, adjacent to the timber and glass factories, lies the Al-Aroussa ice cream factory — a name that has been part of Palestinian life since its establishment in 1970. The factory’s owner, Ghazi Mushtaha, told Al-Monitor, “Despite the significant demand for the factory's various ice cream products, production now is less than 30% of what it was prior to the blockade, when factories exported their products to the predominantly Arab areas of Israeli-occupied Palestinian lands, West Bank cities and other areas in Israel.”

The factory produces roughly 30 types of ice cream, including ice cream brands popular with children, such as the milk-based Al-Aroussa ice cream, strawberry Twist, vanilla, chocolate and Magnum, as well as fruit-flavored ice cream, such as grape, pineapple, strawberry and lemon.

The ice cream industry has remained resilient, despite the difficulties caused by the Israeli blockade on the Gaza Strip, which hinders the import of most of the required production materials. Mushtaha said, “Israel is constantly and intentionally delaying the entry of raw materials such as sugar, cardboard, powdered milk, ice cream cones and flavoring agents that are imported from abroad through Israel’s port of Ashdod.”

Despite the losses incurred by the ice cream factories as a result of the production stoppages during last summer’s war, they all resumed operations by the end of it.

Abu Mohammed, owner of a grocery store in Gaza City, told Al-Monitor, “Although available in Gaza, Israeli ice cream products, imported through Israeli border crossings, cannot compete with those produced by local Gazan stores or factories, because imported ice cream is more expensive and less varied than the locally produced ones.”

Mushtaha said: “The taxes imposed by the Hamas government are putting a significant strain on the owners of ice cream factories. In addition to VAT [value added tax] paid to Israel — of which a portion goes to the Palestinian Authority — we also pay an annual income tax to Hamas, which also imposed its own VAT because it was not recuperating the proceeds thereof from Israel due to the break in political relations with the latter."

The Solidarity Tax law — which Hamas imposed on imported goods and that serves to pay salaries to the employees who were appointed by the previous government — has had an impact on ice cream factories that have had to pay this tax on their mostly imported goods.

Despite the development witnessed by the ice cream industry in the Gaza Strip, political hurdles affecting the industry prove that nothing in Gaza is immune to the effects of politics. Even ice cream, which allows Gazans to alleviate the pressures they face, is affected by Israel’s wars on Gaza, the little support from the consensus government and the taxes imposed by Hamas.