Ahead of the highly anticipated Palestinian general elections, President Mahmoud Abbas issued a decree that called for the respect of public freedoms and the release of all prisoners of conscience. 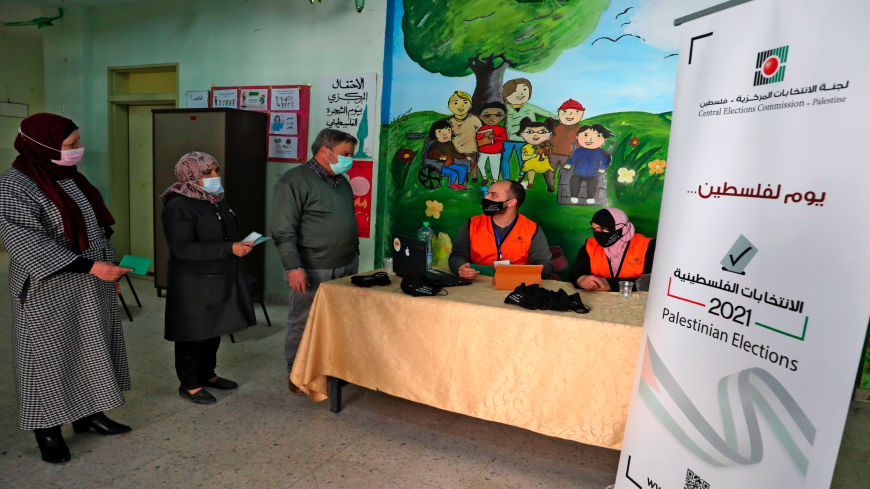 Members of the Palestinian Central Elections Commission register voters in the West Bank town of Hebron on Feb. 10, 2021. Rival Palestinian factions Fatah and Hamas said they had agreed on "mechanisms" for forthcoming elections and to respect their outcome, after years of bitter divisions. - HAZEM BADER/AFP via Getty Images

GAZA CITY, Gaza Strip — The Hamas-run Interior Ministry in Gaza released 45 prisoners affiliated with rival Palestinian faction Fatah on Feb. 25. In a statement, it said the released prisoners were arrested over security issues that harmed resistance groups in Gaza, adding their arrests were not politically motivated. The ministry said the move was part of efforts to improve the atmosphere ahead of the upcoming Palestinian general elections. It said there are no prisoners "arrested for their political views and opinion" in the Gaza Strip. Palestinian Prime Minister Mohammad Shtayyeh asked on Feb .22 the Hamas group to release more than 80 “political prisoners” held in Gaza prisons.

Palestinian President Mahmoud Abbas issued Feb. 20 a decree ordering that public freedoms be observed, including the freedom to engage in political activity, in accordance with the Palestinian Basic Law and other relevant law provisions.

The decree, which is binding on all parties in the Palestinian territories, prohibits the prosecution, detention, arrest, apprehension and all forms of unlawful accountability for reasons related to freedom of opinion and political affiliation.

The decree also calls for the release of all detainees and prisoners jailed for political affiliation or for expressing their opinion, or imprisoned on charges of any other party-related or faction-related reasons in the Palestinian territories. In addition, it provides for the freedom to electoral campaigning, be it traditional, digital or printed, to hold political and electoral meetings, and to receive electoral funding in accordance with the law. The decree also sets forth equal opportunity to media access for all electoral lists without any discrimination by law.

Hamas spokesman Hazem Qassem told Al-Monitor, "The numbers mentioned by Mohammad Shtayyeh are incorrect. There are no political detainees in the Gaza Strip, but [they were arrested] over security issues." He explained that Hamas is open to all steps and measures that would enhance the atmosphere of freedoms in the Gaza Strip, stressing that the factions in Gaza operate all activities in the Strip without any obstacles. "The released prisoners were arrested over security issues that harmed resistance groups in Gaza. Their arrests were not politically motivated."

Hamas leader Mahmoud Mardawi told Al-Monitor that the decree comes as part of the agreement reached during the inter-Palestinian factions talks in Cairo on Feb. 8-9 in preparation for the upcoming Palestinian elections.

“The Cairo agreement stressed the importance of providing the right environment conducive to free and fair elections. It stressed that every Palestinian individual or group is guaranteed the right to exercise freedom of electoral campaigning in accordance with the Palestinian Basic Law, without being subjected to any forms of coercion and pressure, and to willingly choose their representatives in the ballot boxes,” he said.

According to Mardawi, the elections’ results can only be accepted if there are no political arrests or any form of violation of personal freedoms, including the freedoms of movement, expression, peaceful assembly, or of the press and media, provided that the law is not violated.

“The elections cannot take place while there are still detainees in either the West Bank or the Gaza Strip,” Mardawi noted.

He indicated that the decree affirms the Palestinians’ right to full freedom, and all partisan or official bodies must adhere to said decree and refrain from violating it. He further said that all prisons ought to be free of political detainees, and explained that the Palestinian courts, particularly the election court, will be in charge of the decree’s implementation.

Mardawi added that two national committees will be set up with the task to oversee and follow up on the elections. The first will be made up of representatives of the Palestinian factions, and the second will be comprised of lawyers and members of civil society institutions.

He added, “All factions can freely engage in activities as per their political program and as they see fit, so as to communicate their vision with their constituencies.”

“As Palestinians, our commitment to the decree will be tested. We hope that the decree is truly implemented and guarantees full freedoms,” Mardawi said.

He continued, “In case of a violation by any of the parties, the committees will submit their report to the Egyptian sponsor [of the recent agreement reached in Cairo]. Based on that, independent committees will step in to correct the inconsistencies with the agreement.”

Al-Monitor reached out to a number of Fatah detainees Hamas released recently. But they refused to make any comment or explain the reasons behind their release.

One of those detainees who was recently released, however, agreed to speak to Al-Monitor on condition of anonymity. He said, “We are all afraid to speak. Before our release, they required us not to speak to neither the media nor human rights institutions.”

Fatah activists are being imprisoned on charges of “cooperating with the national authority in Ramallah,” he added.

He said he had been detained for more than three months for this very reason, stressing that he is unwilling to exercise any form of freedoms, especially freedom of expression, and will dedicate his time to his family. “I am now convinced that politics are a masquerade.”

Yaser Weshah, a Fatah activist and secretary of the Palestinian People's Committee for Refugees at al-Bureij Refugee Camp, told Al-Monitor, “Abbas’ decree will cease to apply as soon as the elections and electoral campaigns begin. [The factions] will all challenge each other’s [actions], and once the elections are over, the number of prisoners of conscience in both the West Bank and Gaza Strip will have increased.”

Wishah, also a former prisoner of conscience who was jailed in Hamas prisons in 2017, further said, “The Hamas government arrested me because I held a sign that read ‘No to political arrests’ on one of [Gaza’s] main streets. I was released 12 days after my arrest in exchange for the Palestinian Authority's release of a Hamas activist in Ramallah's prisons.”

“I know people who confessed under torture to doing things they had not [done],” he added.

Wishah believes that Hamas’ release of a large number of prisoners of conscience in the past few days depends on the Palestinian reconciliation — if it fails, they will be all brought back to prison. “The remaining are those involved in other types of cases.”

Dozens of Fatah activists who were detained in Gaza prisons were recently released by Hamas. It remains unclear however how many prisoners of conscience remain in Hamas’ prisons.

Mustafa Ibrahim, coordinator of the Advocacy Unit at the Independent Commission for Human Rights (ICHR), told Al-Monitor that Abbas’ decree, if implemented, will create an atmosphere conducive to the elections, such as the right to take part in political activities, and will the people to exercise public freedoms without restrictions.

Ibrahim believes the decree is a step in the right direction as it eliminates public freedom restrictions and human rights violations that the Palestinian territories have witnessed over the past 15 years. The decree would enable the people to exercise the right to vote, the freedom of opinion and expression accompanying the election process, in addition to the freedom of access to information and peaceful assembly, he added.

He indicated that “the decree affirms the Palestinian Basic Law, which guarantees the freedom of opinion and access to information and movement. Yet that was nonexistent in the past years due to the political divide.”

Ibrahim explained that despite the hundreds of complaints they received in the past years, the ruling authorities in both Gaza and the West Bank do not admit that they have prisoners of conscience. The Gaza authorities bring against Fatah supporters charges of cooperating with Ramallah, whereas in Ramallah, Hamas supporters are accused of financing unofficial bodies.

Samir Zaqout, director of Monitoring and Awareness at Al Mezan Center for Human Rights in the Gaza Strip, told Al-Monitor that the Palestinian division has undermined human rights and public freedoms, as political rivalries had been ongoing over the past years. Human rights violations have become common in the Palestinian territories, namely violations of the freedom to criticize the ruling authorities, he said.

Zaqout added, “Some laws are [currently] in force that undermine the basic [rights] mentioned in the Basic Law, such as the cybercrime law in the West Bank.”

He said that one of the most important criteria guaranteeing fair elections is to ensure a free atmosphere. He anticipated that in case Fatah and Hamas acted in good faith, the decree will close the dossier of political detentions. He stated, “The decree proves that the two parties have prisoners of conscience, which they repeatedly denied before us and all human rights organizations as well.”