After the cease-fire in Gaza, Palestinian security services are accused of stepping up political arrests in the West Bank. 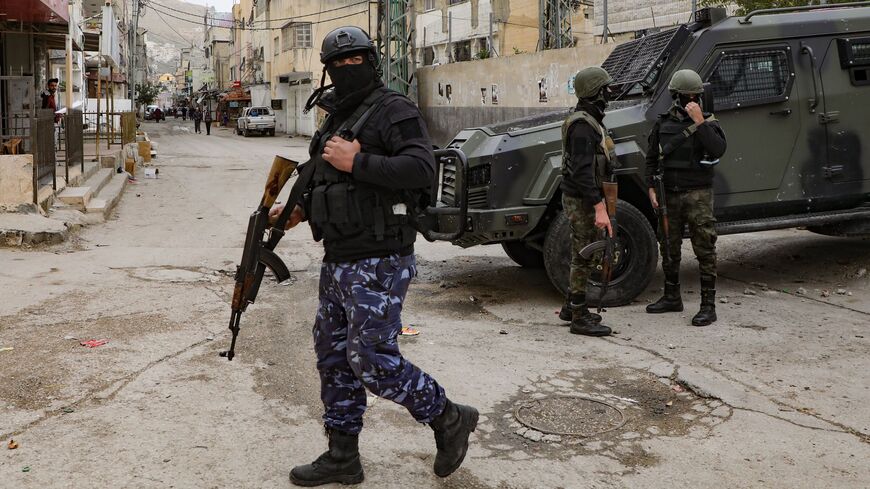 Palestinian security forces in balaclavas stand by an armored vehicle at the entrance to Balata camp, near the occupied West Bank city of Nablus, on Dec. 15, 2020. - JAAFAR ASHTIYEH/AFP via Getty Images

RAMALLAH, West Bank — Akram Salameh from the Beitunia district of Ramallah, in the central West Bank, received a phone call May 22 from the Palestinian Authority’s General Intelligence Service. He was told to appear at its headquarters in Ramallah the next day or his house would be raided and he would be arrested.

Salameh showed up as asked and was sent to the Joint Security Committee prison in Jericho, where he was detained for 17 days before being released on June 7.

His father, Ali Salameh, told Al-Monitor he spoke to his son by phone twice during his detention for a few minutes. The first time, two days after his arrest, Akram asked his father to send him clothes. The second time he called to check on his family, who had not been able to visit him.

Over the years Salameh was arrested several times by both Israeli and Palestinian security services. His father said, “My son suffers back pain and convulsions due to the repeated arrests by the PA. He has been subject to a torture technique known as shabeh [which involves suspension by the wrists] in previous arrests. He was also arrested by Israeli forces twice. The first time was nine years ago and the second was several months ago. At the Israeli prison, he was hit on the head by a soldier and had to have surgery.”

He added, "Every time he was arrested by the PA, charges would be brought against him of inciting sectarian strife. Where did they come up with such an accusation? He was simply arrested because of his political affiliation, of being affiliated with Hamas.”

Since the cease-fire between Hamas and Israel was announced on May 20, the PA security services have been cracking down on Hamas supporters and social media activists in the West Bank.

Tariq Khudairi from Ramallah is another alleged political detainee. The Preventive Security Service arrested him on May 22 and also sent him to the Joint Security Committee facility in Jericho. He was accused of insulting late President Yasser Arafat during a rally in Ramallah, but he was released on May 25.

In a May 24 tweet, Amnesty International criticized political arrests in the West Bank and called for stopping the repression of peaceful dissent. It urged Prime Minister Mohammed Shtayyeh to immediately release Khudairi, who it said was arbitrarily detained for exercising his right to freedom of expression.

Lawyers for Justice, a group that works against political arrests in the Palestinian territories, said in a May 29 statement, “Many of these detainees have been suspended from the ceiling, beaten and insulted after being taken from their homes to the Joint Security Committee prison in Jericho.”

Muhannad Karajeh, director of Lawyers for Justice, told Al-Monitor, “The security services have been leading a campaign of arrests in the West Bank since the beginning of the solidarity activities in support of the Sheikh Jarrah neighborhood, Jerusalem, Al-Aqsa Mosque and the war on Gaza.”

Karajeh said the group has documented several summons to the headquarters of the security services and varying periods of detention on charges of disparaging the PA and inciting sectarian strife. He noted that the group documented 22 suspicious arrests or summons. “Some of the detainees were released after a matter of hours, but nine remain in the Jericho prison and the group is working on their cases,” he asserted.

There is no official count of all political summons and arrests that took place in the West Bank recently, as each human rights organization documents such cases independently.

The PA denies carrying out political arrests despite the reports of human rights organizations.

But Abbas' decree seems to confirm the problem exists. The decree forbids prosecution, imprisonment, arrest, detention and extrajudicial investigation in cases concerning freedom of opinion and political affiliation. The decree also called for the release of detainees and prisoners held in custody for justifications involving freedom of opinion, political affiliation or for any other partisan reasons across the territories of Palestine.

How does one "unintentionally" "seek to harm the PA"? Did he say something else?

Commenting on complaints filed to human rights organizations about these arrests, Dweikat explained, “Some are stirring confusion in the street or harming the PA, intentionally or unintentionally. The security institution has not, for a while now, summoned or arrested anyone for political reasons.”

Ammar Dweik, director of the Independent Commission for Human Rights, told Al-Monitor, “We believe that complaints by citizens about the arrest of some of their family members by the security services for varying periods are related to political activity and posts on social media.”

Dweik said that the commission is currently concerned with the case of four young men currently in prison. “During the last period, more than 20 people were summoned and detained for more than 24 hours. The commission rejects the practice of political arrests or … for expressing an opinion.”

He pointed out that the commission calls for the immediate release of detainees. “If they are not released, the commission asks to visit them within 24 hours,” he concluded.